Ad-fail: Lettuce get serious for a moment 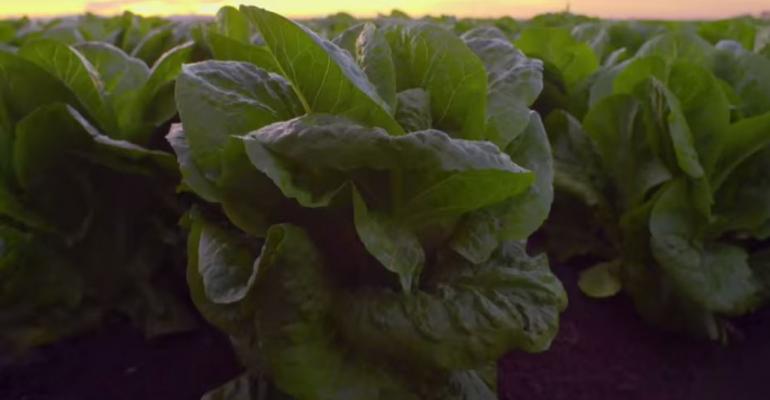 Each week, Rick Polito examines a food/nutrition commercial for accuracy and idiocy. This week: Wendy&rsquo;s joins the transparency conversation to let us know where the lettuce in their salads comes from, but it still looks pretty industrial once the tractor rolls off the screen.

Transparency may be the buzzword in natural, but the buzzword in fast food has always been “value.” That doesn’t mean transparency can’t be overlaid on value, but when the big fast food chains attempt that move, it’s the moment when we either roll our eyes or roll on the floor laughing.

And yet, transparency is exactly what we are supposed to accept in Wendy’s “Romaine Lettuce Journey,” a 1 minute and 22 second documentary detailing the complicated journey from field to plastic tub that makes your disappointing salad as disappointing as it is.

The scenes are pastoral. The hands that pluck the lettuce from the field are noticeably non-ethnic. It’s when the lettuce moves onto the series of conveyor belts that the “journey” stumbles into that factory-farm/assembly-line food system that we all know exists and yet don’t want to think about too much. Sure, it’s great that the lettuce makes it from the farm to the cooling center in six hours. We suppose we like that it’s chilled below 39 degrees the rest of the way. But did we have to know that there are 29 distribution centers? Did we have to see the forklifts? Did we have to think about those people slinging boxes of lettuce all day?

When the lettuce arrives at the store, lurching through a weird tunnel-vision point of view shot, we see the lettuce getting chopped and washed and we see the weird two-spout dressing squeeze bottle that makes a splurt noise. We didn’t know you could buy a two-spout dressing dispenser. We don’t know why they needed to show it to us twice, with the same splurt sound effect that we assume some audio crew spent most of day concocting with spurting fluids we don’t want to know about.

Then there is the chicken, sizzling on the grill and making us think about a transparency video we don’t want to see: “Wendy’s Meat Saw Massacre.”  As one YouTube viewer commented, “How about you make a video on where your meat and dairy is actually coming from? Oh that's right...because then you wouldn't have anyone in your nasty drive thru.”

Of course, all of this ends up in a plastic, because when we think nourishing meals and transparency, we think plastic tubs. But pay no mind. The slogan clears it all up: “It’s not what your salad goes into. It’s what goes into your salad.” That almost made sense the first time you read it. Didn’t it?

What makes the Wendy’s adorable documentary all the more interesting is that they are not the first fast food chain to take a trip with their lettuce. In 2011, McDonald's introduced us to Dirk Giannini in its Supplier Stories. We liked Dirk. He’s a fourth-generation farmer. He looks like a nice guy. They didn’t make him wear a yellow jumpsuit and a red fright wig, which is certainly a step up for the golden arched kingdom. So now fast food has become a part of the transparency conversation.

We’d be surprised if anybody in the drive-through window takes part in that conversation, but the YouTube epic had 1.2 million views in the first month.

Does that conversation include the words “organic?" Probably not.

Ad-fail: Taco Bell takes on the Fascist Clown and nobody wins
Mar 31, 2015