Ad-fail: One box, one kid, one cup of sugar 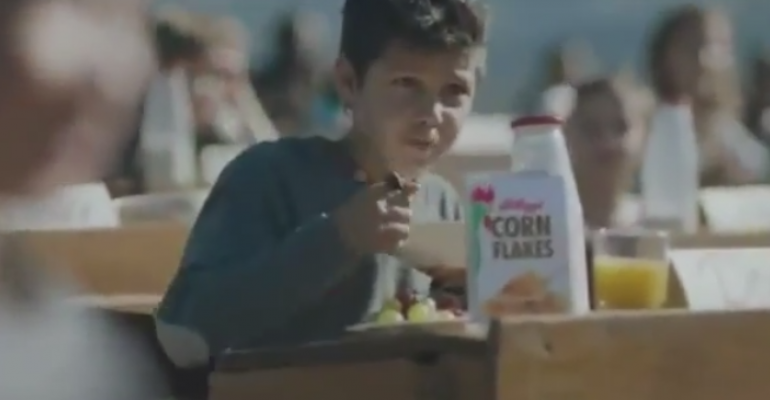 Each week, New Hope editor&nbsp;Rick Polito examines a food/nutrition commercial for accuracy and idiocy.&nbsp; This week, Kellogg&rsquo;s wants you to help them buy cereal for kids, but can the company behind Tony the Tiger really present itself as a nutritional plus?

Kellogg’s cares about kids. At least that’s the message of a “Buy a box, help a child” spot telling us that “breakfast helps fuel a child’s potential” and “one in five” kids are skipping breakfast and buying their cereal will buy breakfast for those hungry youngsters. We learn this as throngs of children scramble across a meadow to sit behind rough-hewn wooden desks topped with paper signs scrawled with careers like "coach," "ballerina," "teacher" and “astronaut.”

Although they do not appear in the commercial, I supposed we can assume that caring about kids is a sentiment shared by Tony the Tiger, that creepy frog from Honey Smacks and Toucan Sam, who is now throwing marshmallows into Fruit Loops because those crunchy colored rings didn’t have enough sugar already. When we hear that, for kids, “a bowl full of potential is one of the things they need to help reach theirs,” we are left to wonder how much potential there is in Smorz, which the packaging describes as “crunchy graham cereal wrapped in rich chocolate coating with marshmallows.”

These are the same people who make Cinnabon cereal. They care about kids that much!

Oatmeal Delight Pop Tarts? Yeah, those too. The Center for Science in the Public Interest called those treats “largely a mix of whole wheat and white flower with 3½ teaspoons of added sugar (and surprisingly little oatmeal).”

Of course, in the commercial, all we see are Kellogg’s Corn Flakes, perhaps the least objectionable product in the company’s cereal quiver, but it doesn’t say if that is the box of cereal you’ll be buying for a hungry kid when you by a “specially marked” box of Kellog’s product. The kids are spooning the corn flakes down as they trade career titles from desk to desk—

That kid was never going to make it as an engineer, anyway.

You could wonder how different the commercial would have been with bowls of Apple Jacks, but those Apple Jacks Kids disappeared off the box in the 90s. Maybe found their bowl full of potential and smoked it.

Because that sugar high has to wear off at some point.