Could an organic check-off help grow the industry in all directions? 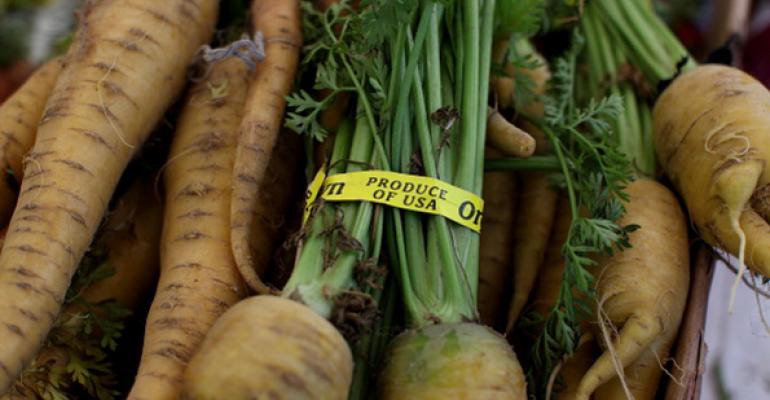 A look at what an organic check-off would look like and how it might benefit the industry.

When the Organic Trade Association voted in September to move ahead with an organic check-off program - a federal program that would collect money from organic producers and use it to research and promote organic as a whole - the organization had already been working on the effort for three years, and it was only the beginning. But there's a long way to go before the check-off is a reality, OTA Executive Director Laura Batcha said, including some battling of opposition, which is just starting to pick up steam now.

The next step is to file an official application with the USDA, which will then be reviewed by the agency and, presumably, published in the federal register, at which point it would be open for public comment for 60 days. If all progresses smoothly, Batcha estimates the check-off might be ready to roll in about two years. So what will that mean? What will the check-off look like, and what are the ultimate goals and vision laid out for it?

The specific programming will be up to the board, which will be made up of eight producers and eight processors and handlers. While some critics fear a check-off might favor one segment of the industry over another—processors over farmers, for example—Batcha said the board is designed to prevent exactly that type of conflict. “Neither of those groups have a majority on the board," she said. "It's 50-50, so it's got to be in everybody's best interest.”

Opposition is surfacing mainly from conventional producers and from people who don’t feel they can trust check-off systems as a whole, Batcha said, and not from people who dislike the model of the organic check-off specifically. She said the opposition that OTA have heard from within the organic industry is spread evenly among large and small players, so it’s not an issue of large or small companies feeling neglected, either.

What the funds could do

Once the organic check-off is established, the board will decide how to spend the funds, which will be divided evenly between research, public education and promotion, information services, and increasing organic acreage. One quarter of the funds will be for discretionary spending by the board.

Batcha may have a glimpse, though, at what some of the first steps might look like. “We know there are pressing needs," she said. "It's just about really educating the consumer about what organic is, versus other claims—and having enough, quite frankly, money and volume behind that message to break through."

There are also some research needs—in strategies for organic weed management, for example, which is a perennial challenge for organic farmers, as well as finding alternatives to materials, such as antibiotics, on the national list of prohibited substances.

Unlike most conventional check-offs, the organic check-off will require a vote every seven years (a continuance referendum) as a means to ensure members continue to be happy with the program and feel their interests are represented by it.

Ultimately, Batcha said, the goal is to grow the industry in all directions. “What would be the most positive outcome would be that the industry is still growing from a demand side, but that the supply-side growth, in the U.S. in terms of domestic acres of farm, had caught up with the demand," she said. "And that we doubled-tripled-quadrupled acres of organic production—and all the while farmers were making a living and the premium that they needed to, to make it worth being certified organic.

"The overall impact is for the industry to be able to engage in self-help and self-investment over the long haul," she added. "So $30 million to $40 million a year sounds great one year. It will be a complete game-changer year over year. That’s how many of these industries have thrived. It's consistent investment.”