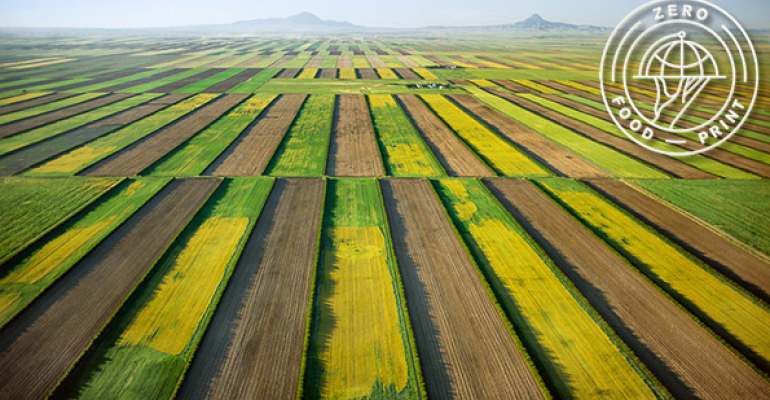 The global food system accounts for roughly one-third of the world&#39;s greenhouse gases. Here&#39;s how nonprofit organization Zero Foodprint is helping restaurants (and diners) lead the fight against climate change.

Carbon neutral. Remember that word, because odds are you'll be hearing it a lot more in the near future—and if there's any justice, it'll become more than just a food trend; it'll become a new standard for the restaurant industry and beyond.

"The global food system accounts for roughly one-third of the world's greenhouse gases," state the founders of Zero Foodprint, a new nonprofit organization dedicated to helping restaurants drastically reduce their carbon footprint. Restaurateur Anthony Myint and Lucky Peach Editor-in-Chief Chris Ying founded Zero Foodprint in 2014. Their goal? To help restaurant owners not only understand their own impact on climate change, but provide a set of achievable guidelines they can follow to reduce and offset their business's carbon emissions.

In an interview with Stefaine Tuder at SF Eater, Ying expands on Zero Foodprint's mission: "We want to close the gap between this abstract idea of climate change to what simple things restaurants and people can do in their day-to-day lives." How simple? Action steps range from adding a 25-cent charge on a beef dish (in order to offset that meal's higher carbon footprint) to switching from a coal-burning utility company to a renewable energy source. Some restaurant owners actually end up saving money on utility bills after the shift.

But Myint is hoping this carbon-consciousness will become more than just a point of concern for people who work in the food industry; in order to kindle effective change, diners need to shift their perspectives as well. "People who are not nutritionists still have a pretty good internal sense of calorie counting," Myint tells SF Eater. "But I don't think the general public has that sort of internal calculation [that helps them understand] the carbon footprint of ingredients and foods." As he points out, simply ordering a fried chicken sandwich over a burger can reduce your carbon footprint by three or four times. What if more diners were educated about this?

Now that Zero Foodprint's first two clients—Noma (in Copenhagen, Denmark) and San Francisco's Mission Chinese Food—have successfully been brought to a carbon neutral baseline, the organization is getting ready to bring more domestic restaurants into the fold. But even the most efficient restaurants still produce some kind of carbon footprint. Not daunted by this, Ying and Myint actively support a range of food-related carbon-reduction projects around the world to help offset the remaining emissions.

Just as the natural products world has been challenged to make packaging and manufacturing processes more sustainable (a gauntlet that Maine-based granola maker Grandy Oats recently took up by relocating to a solar energy-powered production facility), so restaurants are in a prime position to not only reduce the negative impact of foodservice on greenhouse gases, but potentially even lead the fight against climate change.

[email protected]: What is carbon farming, and why should you care? | Whole Foods store to include vegan diner, coffee shop
Mar 25, 2016