HomeProducts and TrendsFood and BeverageLucuma—the next superfruit?
Recent
Latest
4 tips to get ahead of chemical concerns in packaging
May 20, 2022
7 CBD favorites in the increasingly popular gummies format
May 20, 2022
Mission MightyMe helps parents introduce allergens to babies
May 20, 2022
UNFI's Eric Dorne to step down as chief operating officer
May 20, 2022
Trending
Whole Foods' honors 30 companies with 10th annual Supplier Awards
May 18, 2022
Sponsored Content
The rise of sustainable business – eGuide
Sponsored Content
Getting ready for 2023: Trends for brands to consider
May 17, 2022
Sponsored Content
Unboxed: 7 plant-forward ice creams to stock this summer
May 10, 2022 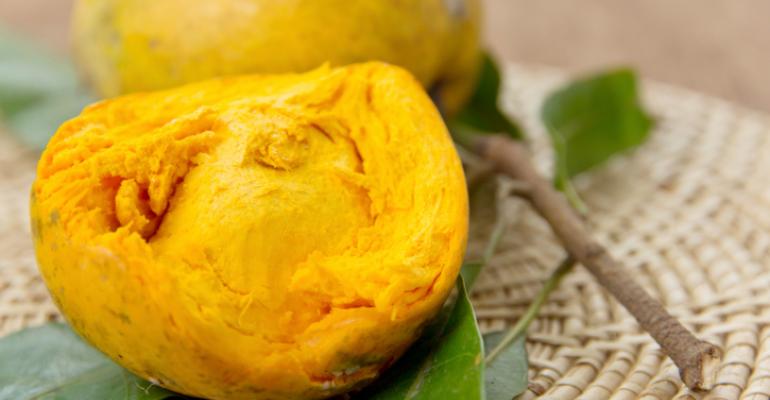 This sweet Peruvian fruit is making its way into more products, from spreads to desserts. Will it rise to superfood status?

Like so many superfoods to take U.S. consumers by storm, lucuma is a fruit that's long been popular in its native home. The Peruvian fruit offers beta carotene, iron, zinc, vitamin B3, calcium and antioxidants—yet has a naturally sweet taste. It has many uses, for example as a skin health tonic and, because of its low glycemic index, the fruit may also be helpful in controlling blood sugar.

Known as the "Gold of the Incas," lucuma these days is the most popular flavor for ice cream in Peru, Mintel reports. And while its current use is relatively small, it's increasingly being used as an additive to chocolate bars in Europe and to some extent in the U.S. Whether it will break through to true superfood status, however, remains to be seen.

"Most recently, we see applications in spreads such as in almond butter and peanut butter," said Gwen Crothers, global food science analyst with Mintel. "It can also be found in desserts such as mousse, and healthy snacks such as energy bars and cereals."

California-based Navitas Naturals has sold lucuma as a single-ingredient product for almost ten years but also uses it in five snack foods. "We added the lucuma to our Power Snacks to add balance to the flavor," said Zach Adelman, founder and CEO. "We have found lucuma adds a very interesting sweet, almost milky taste (especially when paired with cacao or chocolate) without the need for dairy."

He notes that lucuma sales have been rising moderately over the near-decade that they've been selling and marketing it. "I am not sure lucuma will ever become a top-selling superfood since it does not pack a ton of nutrition, but is a really nice ingredient for flavor and sweetening." He added, "It adds a very nice balance to recipes and is a great ingredient to add to smoothies."

Adelman said the company still sees strong capacity to grow lucuma sales, and currently doesn’t see a ton of competition in the market.

Aside from Navitas Naturals, Crothers pointed to a few other companies using lucuma. Ceasar's uses it in its homemade ice cream; YumButter packed lucuma in its butter, which is claimed to be packed with protein, healthy fats and a wide range of micronutrients; and Happy Day Raw Foods has picked it up for its mousse. Crothers noted a drop in the share of new product innovations coming out of the U.S. over the last two years, but says that could be attributed to Europe forging ahead, rather than the U.S. losing interest.

Crothers thinks one area offering promise for growth in the U.S. could be among ice cream manufacturers—"perhaps promote it more like a gourmet homemade style ice cream, rather than an ordinary commercial ice cream at the store, promoting its health benefits as a Peruvian superfood." Other kinds of products where we may start to see more of lucuma outside of Europe include juice, functional foods and dietary supplements (for its antioxidants), and perhaps in cosmetics (the fruit pulp extract) or as a natural flavor. It is also being promoted as a diabetic-friendly alternative sugar.