HomePeople and Company ProfilesOne Degree Organic Foods finds success with traceability initiatives
Recent
Latest
4 tips to get ahead of chemical concerns in packaging
May 20, 2022
7 CBD favorites in the increasingly popular gummies format
May 20, 2022
Mission MightyMe helps parents introduce allergens to babies
May 20, 2022
UNFI's Eric Dorne to step down as chief operating officer
May 20, 2022
Trending
Whole Foods' honors 30 companies with 10th annual Supplier Awards
May 18, 2022
Sponsored Content
The rise of sustainable business – eGuide
Sponsored Content
Getting ready for 2023: Trends for brands to consider
May 17, 2022
Sponsored Content
Unboxed: 7 plant-forward ice creams to stock this summer
May 10, 2022 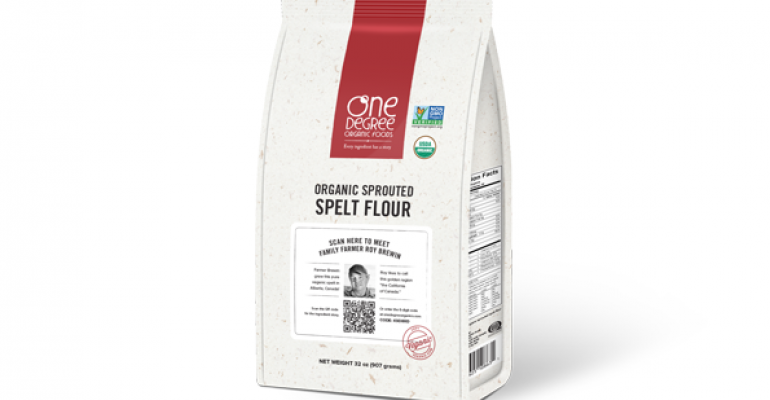 Since winning a New Hope NEXTY Award in 2012, One Degree Organic Foods sales have grown exponentially, and its geographic presence is expanding, too.

One Degree Organic Foods was barely two years old when it won a New Hope NEXTY award in 2012. Up until that point, much of the company's focus had been on building the software infrastructure that would become a hallmark of the company. One Degree products come with QR codes that, when scanned, connect a consumer to where the ingredients came from, providing details about each ingredient and the farmers who grew it. Getting NEXTY recognition at just the point that One Degree was transitioning to focus on its sales and marketing, rather than building out the technology to enable that supply chain transparency, really opened up doors for the company.

"That was really kind of our beginning," said Danny Houghton, vice president for marketing and sales at One Degree, explaining that they were soon discovered by Whole Foods, Sprouts and other leaders in the natural and organic space. "There was a real hunger for, and a desire to have, food transparency. That idea really resonated with customers."

The company has since gone on not only to sell nationally in the U.S. and Canada, but has established a presence in Europe and is in the final stages of setting up clients in Asia, totaling somewhere north of 5,000 retailers.

Houghton wouldn't provide statistics on use of the QR code but said that it drives a significant percentage of the company's web traffic (scanning the code takes a user directly to the site).

Clearly, the company is seeing healthy growth. Houghton wouldn't disclose specific sales or growth figures but said the company tripled in 2014 and doubled in 2015, and he expects it to follow a similar growth trajectory in 2016. "It's been massive," he said.

Because of its focus on providing transparency in its supply chain and ingredient sourcing, when expanding its production capacity, One Degree has to develop its supply of ingredients in a specific, deliberate way "focusing on developing close relationships with more farmers, as opposed to simply placing a phone order with a broker for more wheat. "Our supply chain is a different model than most of our competitors. And there are positives to that and there are challenges," Houghton said. "It's a result of the transparency value-add that we provide in our brand. It requires us to think a little bit asymmetrically."

With such focus on expanding its geographic presence and sales volume, the One Degree product line has remained steady with its offerings of sprouted breads, flours and cereals. The cereals sell the best, he said, although others are growing as well, with new products expected next year.

Banza stays focused on 'bringing people back to the pasta aisle'
Jan 21, 2016