HomeProducts and TrendsFood and BeveragePriorities and challenges in organic dairy production
Recent
Latest
4 tips to get ahead of chemical concerns in packaging
May 20, 2022
7 CBD favorites in the increasingly popular gummies format
May 20, 2022
Mission MightyMe helps parents introduce allergens to babies
May 20, 2022
UNFI's Eric Dorne to step down as chief operating officer
May 20, 2022
Trending
Whole Foods' honors 30 companies with 10th annual Supplier Awards
May 18, 2022
Sponsored Content
The rise of sustainable business – eGuide
Sponsored Content
Getting ready for 2023: Trends for brands to consider
May 17, 2022
Sponsored Content
Unboxed: 7 plant-forward ice creams to stock this summer
May 10, 2022 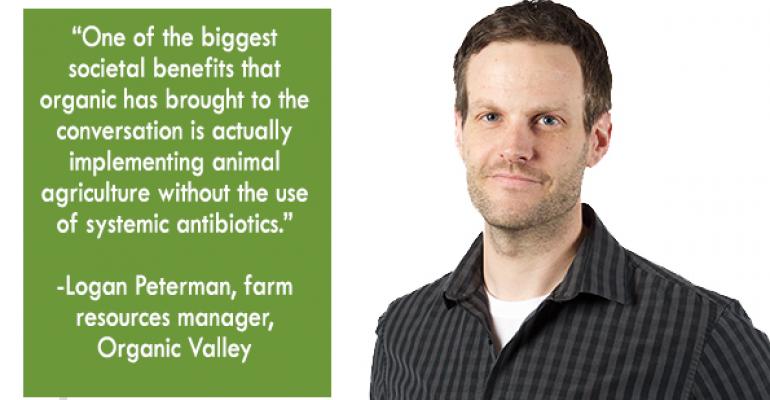 A recent, highly publicized study touting significant nutritional benefits of organic milk compared to conventional certainly won’t hurt organic dairy’s reputation, but there are other reasons that dairy is one of the fastest growing categories within organic (the Organic Trade Association reported 11 percent growth in 2014, despite shortages in organic feed).

Logan Peterman, who manages farm resources at CROPP Cooperative/Organic Valley — an independent cooperative of organic farmers based in Wisconsin — gave us some insight into what other factors are driving growth, and the hurdles his organization is working to overcome.

Why do you think we've seen such big growth in organic dairy?

Logan Peterman: One of the reasons is probably the visibility in store. You look at something like organic produce and, for store buyers, it’s often a little tougher to get into that segment because they have to differentiate. You’ve got to put together the big signage and set aside a separate section if you really want to differentiate the product, whereas with organic dairy, it can often sit right in case and be alongside other products, and the seal and the packaging kind of inherently differentiate it.

My guess is the other piece that we’ve seen in our demographic studies is that the most motivated buyers with regard to organic are generally young mothers. When you look at the diets of kids, they’re high in dairy products, so I think it makes a certain amount of sense that dairy would be a leading indicator for those young mothers looking to make decisions to help their kids.

What are some of the unique challenges for organic dairy production, versus, say, production of organic produce?

LP: I think one of the stickiest items that we face at this point is tied up with the antibiotic question. So when you graduate from organic produce production to livestock, then you suddenly have this animal health question. One of the biggest societal benefits that organic has brought to the conversation is actually implementing animal agriculture without the use of systemic antibiotics. They have to be used if the animal requires it, but then [those animals] are not allowed to be sold into organic production—either meat or milk—if an antibiotic is used to save that animal.

Showing that it can be done I think is of great value to the dialog right now in light of antibiotic resistant bacteria. But doing so is a real balancing act for producers because they have to be very careful about the decisions they make and about being certain that they’re taking the best care of their animals. The decisions that they make about when and where to use that medication are sometimes pretty emotionally loaded, and I think that that’s a real challenge we’re still working through.

Do you get the sense that dairy farmers are feeling really motivated to make that transition to organic at this moment in time?

LP: We’re seeing a new flush of interest. There’s a lot of movement; there are a lot of folks eyeing it up; there are a lot of folks that are almost organic—maybe selling locally and just not certified because they didn’t feel that they’re market required it but are now looking at going through it. The discrepancy between conventional and organic pay prices has never been bigger, so it’s definitely a financial motivator.

Is there one area in this sector that stands out as really needing more research?

LP: There are several. I think there is more research needed, especially in the eyes of the veterinary community, on the efficacy and consistency of herbal remedies used in livestock treatment, which make up a very large percentage of the treatments used on organic cows. I think the veterinary community has an obligation to make sure that due diligence is done. That’s a sector that has just in the last handful of years gotten big enough to justify the outlay of basic research to do that work.

Another area that we’re just getting into across the board is soil fertility and particularly the biology of soil fertility. Organic producers are acutely aware of this element—the fungus and the bacteria in their soils are really critical to delivering minerals and nutrients to the plants that ultimately support their farms. They’re starting to ask a lot of really valuable questions about how they can manage those communities, and there are not a lot of really confident answers to complete that loop. When it comes to, yes you can do A, B and C in order to improve the community of bacteria and fungi in your soil and thus the performance, we don’t really have that piece.

The carbon sequestration issue is one that is of great interest to the public at this point. What I would point out there is that so much of the benefit of organic comes from the grass, and the mandate that the drafters of the organic rule put in there that animals be grazed ultimately was codified as the pasture rule, which is 30 percent dry matter 120 days a year. It’s becoming more clear that that’s got some substantial benefits for carbon sequestration and also for milk nutrition.