HomePeople and Company ProfilesProtein in the pasta aisle? Banza is making it happen
Recent
Latest
EXPO VIDEO: How did a young sparkling water brand get licensing deals with Marvel and Disney?
May 16, 2022
Beyond Meat's product launches lower Q1 profits
May 16, 2022
Sponsored Content
Exploring the CBD gummy revolution – article
Moonshot Snacks at the forefront of eco-friendly food innovation
May 13, 2022
Trending
Debra Stark’s light shines bright on natural products industry
May 10, 2022
Monitor: Consumer research on collagen shows how much education is needed
May 12, 2022
Hemp CBD industry struggles so far in 2022
May 10, 2022
Natural beauty market trends
Jun 16, 2021

Protein in the pasta aisle? Banza is making it happen 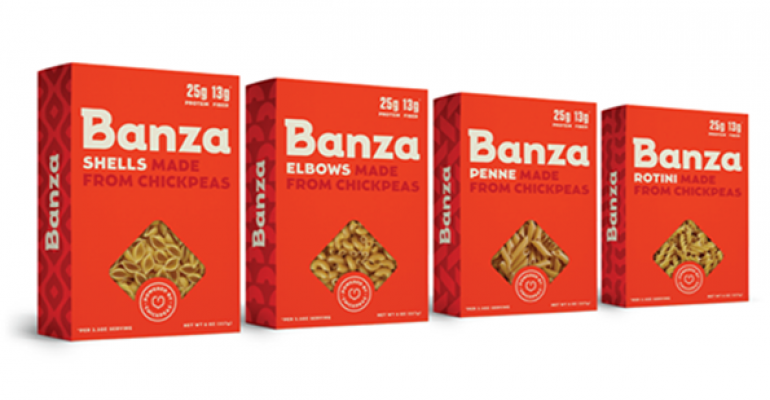 The chickpea pasta company says meeting people face-to-face and getting them to try the product is the focus of its growth strategy.

Detroit-based Banza won a NEXTY award in 2014, when it was just a few weeks old, for its line of chickpea pastas. It was one of the first companies to enable people to chow down on pasta without eating a bowl full of gluten or refined carbs—and get a protein boost in the process. Since then, Banza's retail presence and consumer popularity have skyrocketed, and they remain a leader not just in the gluten-free sector but in natural foods innovation overall. We chatted with Brian Rudolph, who cofounded Banza with his older brother Scott, about their growth strategy and vision for the future.

What has your growth strategy been for Banza?

Brian Rudolph: First, it was to get into amazing retailers. I think we started really well. Then the goal was to position our product as a mainstream product. So if we're going to change the way that people think about pasta—it's not just a specialty product, but something that they should be eating all the time. So we really focused on the right placement within the stores.

Now, it's building up this field marketing team so we can have boots on the ground and get people to try the product. That's our number-one focus as far as growth goes. We still have many more stores to get into, but getting people to try it, and bringing people back to the pasta aisle, is probably the main focus today.

Do you plan to expand beyond pasta at some point?

BR: The goal is to take the foods that people love and make them better by using more nutritious ingredients. We're excited by the potential—there are so many foods that people love and would like to be eating more of, but they feel like they can't because they're often not made from ingredients that they want to be eating all the time. There are a lot of things out there, whether it's cereal or tortilla chips, where I think if it were made with a better ingredient, there's something really great that can happen.

But for now, it's extensions within the realm of pasta—different shapes, things like that. We want to be the best at pasta. Once we feel like we've built up a stable foundation, we'll start looking at other products.

Banza was really an innovator in this area, but is no longer alone in the space. How do you keep out in front and remain competitive?

BR: While there might be some similar products, we are still doing our own thing—you won’t find other chickpea pastas out there. We see our product as something that really resonates with consumers. People love chickpeas, and they love that it looks and cooks, really, just like regular pasta. I think that's one thing that's working for us, but eventually there will be people who will make a chickpea pasta—we're not naive to that. The great thing is that we really have found a way to connect with consumers, and we see that as we continue to develop our brand.

There's been a proliferation of chickpea products in stores, from chips to flavored baked chickpeas. Is that having any effect on Banza?

BR: I love most of the chickpea products out there and I eat them all the time. And there's no better educator for us, in our market, than Pepsi and Sabra just doing a ton of education on what hummus is. I think the stars kind of aligned for us, where the interest in higher-protein foods, eating healthier, and just generally in chickpeas is there more than ever before.

You have an easy sell with the gluten-free crowd. Who else is buying Banza?

BR: Our core demographic is people who are gluten-free, and people who have diabetes—because Banza has a low glycemic index. Often, if you have diabetes you can't have pasta because it will spike your blood sugar. And there are people looking for great sources of plant-based protein, so vegans are a great demographic for us.

The long-term prize is really the people who are doing the shopping for the family. It tends to be women, ages 25 to 44. We see that as kind of a long-term goal.

Banza is in the natural as well as mainstream channel; where are sales stronger?

BR: We're seeing success across the spectrum. That's the exciting thing—because if we're going to be changing pasta, we're going to have to see success in every place where pasta is successful.

BR: Our team is always out talking to consumers. We do a lot of the demos ourselves. There's no better way of understanding the customer than actually talking to them. We're constantly testing out different ways of engaging customers. What is it that resonates the most—sometimes it's higher protein, sometimes it's lower carbs, sometimes it's that it's gluten-free.

What we’ve found is that when people try the product, they end up falling in love with it. But if people just see it on the shelves, they might question, what is it? Or they might not even see it. So if we can get people to try it, we've found that that goes a long way. So finding novel ways of getting people to try Banza is big for us.

Which retailers really helped you advance?

BR: Some retailers have taken a chance on us in a way that I'm extremely grateful for. One of those is ShopRite. Sprouts also took an awesome chance on us very early on; they were one of our first retailers.

You've received some healthy investments in recent months. Where are you spending that money?

BR: It'll go towards increasing our capacity. We're currently maxed out on capacity—which is a great problem to have. But we do have some exciting retailers that we've been talking to, and they're just too large for us to fulfill.

Paid Content
Investing in an organic and pesticide-free community – video
May 09, 2022