HomeProducts and TrendsFood and BeverageQ&A: Rhythm Superfoods pushes beyond kale chips
Recent
Latest
Innovation at Milkadamia is a weekly exercise
May 27, 2022
Sponsored Content
Are there potential carcinogens swimming in your biobased laundry detergent? – article
Rowdy Mermaid disrupts functional beverages with science-based innovation
May 26, 2022
Monitor: Environmental claims confuse consumers—even natural shoppers
May 26, 2022
Trending
Getting ready for 2023: Trends for brands to consider
May 17, 2022
Natural beauty market trends
Jun 16, 2021
The Planting Hope Company aims to prove gender equity leads to success
May 23, 2022
Podcast: What brands need to get on shelf at Fresh Thyme Market
May 24, 2022 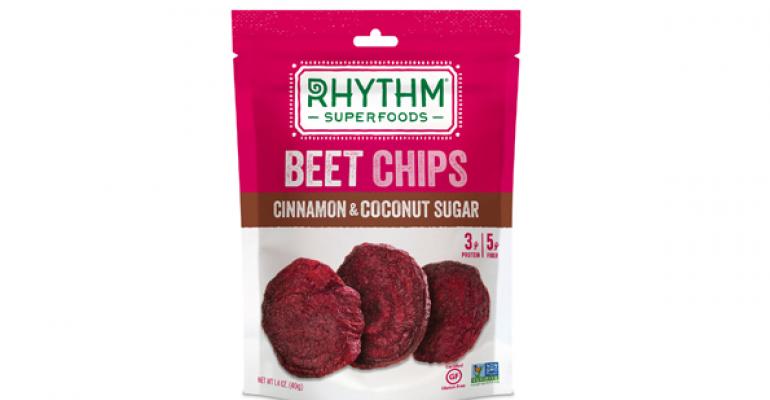 After landing in Target and Starbucks, and securing a $3 million funding round led by General Mills, Rhythm Superfoods is ready to send some new plant-based snacks to store shelves soon. 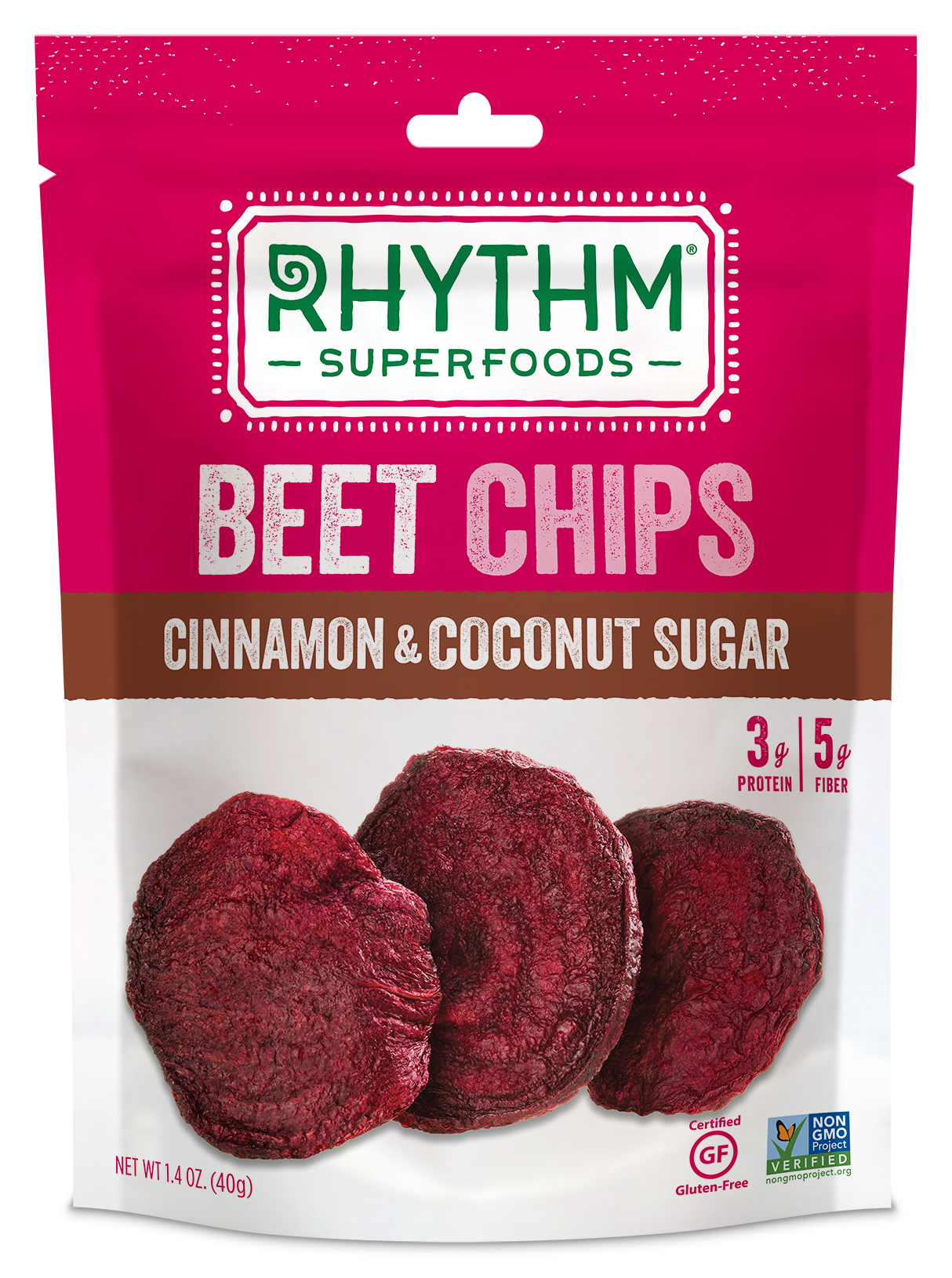 Rhythm Superfoods, one of the first brands to take kale chips into retail stores nationally, announced in January that it closed a momentous $3 million round of Series C funding, with a lead investment from General Mills, through its new business development and venturing unit 301 Inc. CircleUp was also among the group of investors. We spoke with Rhythm co-founder and CEO Scott Jensen about what the investment means for the plant-based snack company moving forward.

What are your plans for the funding you’ve just raised?

Scott Jensen: A year and a half ago, we started a pretty intensive R&D process to come up with more products that tasted good and stretch the brand into more than just the kale chips. That R&D process started yielding some products that we wanted to launch, and the launching costs money.

I would say that two-thirds of the money that we've just raised is either directly involved with the marketing and trade of the launch of new products, or the production of them—new products that we're launching right now as we speak. A little bit, about 5 percent to 10 percent of it, goes into some new machinery and equipment that we had to get; and we'll need more working capital just for growth—forecasted to be above 50 percent this year—for needs like holding onto inventory, shipping inventory, and waiting to get paid, and producing products.

What role do you see General Mills/301 Inc. playing in Rhythm Superfoods, and how do you think the relationship will inform anyone’s larger goals or visions for the company?

SJ: What they do and have been doing, and I couldn't be more excited to be involved with these folks, is to the extent that General Mills, through 301 Inc., and Rhythm are able to work with each other as partners—they'll put wind in our sails and help us accelerate on our R&D, our technical side, on equipment analysis, on marketing, on quality assurance control.

It's incredible what they have in terms of knowledge. They're serious about being involved in a specific way in what people want to characterize as new food, or food 2.0. They have these incredible brands that they've been making for decades and decades. Some of those brands don't necessarily resonate with a millennial or a new type of consumer of food, so rather than develop foods, they want to be a part of it in many different ways. I believe making investments through 301 Inc., like they did with us, is a way of getting in there and see if they can create an experiment with us that works.

They're not a majority owner—they haven't bought us—but they've opened their door up to a tremendous amount of really smart people who are helping us to think smarter and different about how we engage their assets to help us become a better company. We're just super excited to see what plays out this year. There's just a tremendous wind in our sails right now and can't wait to try to navigate the ship.

What are the new products you have in the works?

SJ: We've got a broccoli bite that we soft-launched in the third quarter last year. We also launched a roasted lacinato kale into Whole Foods in the fourth quarter of last year.

We've also got—but they probably won’t start appearing in stores until the third quarter of this year—a really neat dehydrated beet chip. It’s sliced red-purplish delicious beets that go through a special proprietary process and dehydration. They're just like a fried chip, but without any oil. There's a plain—naked—flavor; a cinnamon-coconut sugar; and a sea salt version.

How is the roasted lacinato different from a regular kale chip, and how is it selling?

SJ: The lacinato kale—it's flat kale, almost has a snaky, scaly look. We take that kale leaf and cut the stem out of it, roll it through a flattening pinwheel and it flattens to paper thinness. If you can think about the roasted seaweed snacks that are very popular—we make it almost that thin, and we have a micromist of high-oleic sunflower oil that gets sprayed on it and it goes into the oven and roasts, just like you would roast or make your own kale chips in your own oven. We sell and merchandise it in the same kind of clear plastic trays that the seaweed snacks are merchandised in. It looks like a seaweed snack and it's thin and flat like it, and it eats like it, but it's coming not from the sea but from the garden.

The roasted kale chip is doing extremely well—in the stores where it's sold, it is outselling our current kale chip. In most of the stores, i

t is merchandised near our current kale chip, so there's probably a little bit of cannibalization going on there, which we're ok with. This one is just like kale 2.0. It's only in Whole Foods now, and will start to appear in other stores starting in April.

What does the future for the regular kale chip look like? Has it past its prime?

SJ: For us, we're still growing in the stores we're at, and we're adding new stores every month. We just jumped into Target for the first time last month. Target never had a kale chip in their store and now they have ours. There's more retailers that will be able to make that same claim. Starbucks now has our kale chips.

So there's lots of shelves to get on and we're excited to be on the shelves, but I do see by the end of this year, we won't see the type of growth that we've been seeing over the last two or three years—on the kale chip. Meanwhile, we're launching other versions of it and other really good plant-based snacks, and we’ll continue to grow, just at a slower pace on our normal kale chip.

I'd like to see from us at Rhythm, or some of the other competitors, doing something different with it—maybe there's some different inclusions, or prebiotics or probiotics or something like that. I think that's going to be what happens with the category over the next year.

For us, we've got our hands full this year with launching the roasted kale and the beets and the broccoli. And we do have some plans for later in the year, if we can get it done by September-October, we've got some other products that are plant-based but not necessarily the same type of vegetables that we've been using and that people know us for.

How many stores are you in nationwide?

SJ: We're probably in about 8,000 or 9,000 stores. Most of that is with the original kale chip; we've been selling that for close to 5.5 years. We just started getting it into several hundred convenience stores this past year. We started to get that product also into several hundred food service locations, not sit-down places but grab-n-go restaurants, through one of our distributors. And we're in the club stores, we've been in several regions of Costco and we export to five or six countries.

SJ: The company has had, over the last four years, right around 90 percent compound annual growth.

Do you expect the investment to help you reach a broader range of consumers?

SJ: We've had some really good help from some of their sales team in different functional areas, from the club side and the convenient side, as well as some of their leaders in the Canadian sales and business development side. I didn't think we were going to have that right off the bat because there were so many other things going on, but just through the great relationship we have with them, we've been introduced to some really sharp people and I think we are going to see some lift in our sales fully attributable to what they're doing for us.

Their sales people are not going to be selling our product. We're kind of on our own to ply it out and grab the business, but they've helped us open some doors that we didn't know how to open before.