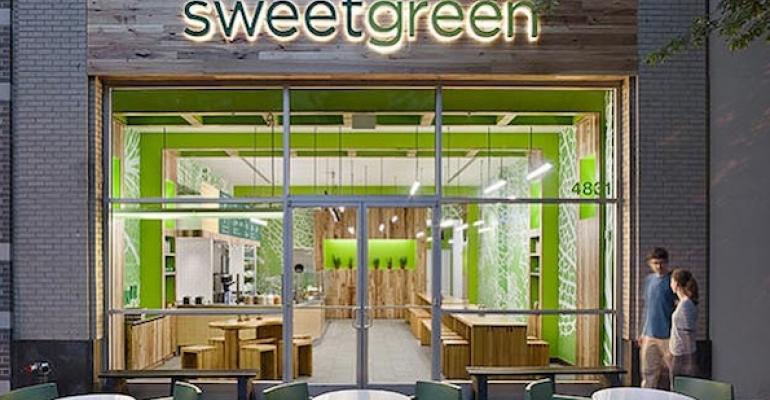 Can fast food really be healthy? One hip, organic chain sets out to change the model.&nbsp;

â€œI didnâ€™t think I would go into the restaurant business,â€ admits Nicolas Jammet, cofounder of Sweetgreen, a hip and healthy local-foods restaurant chain that began with a single restaurant in 2007 and has since grown to 27 locations. â€œI grew up in the restaurant industry and I saw how hard my parents worked. My parents always told me, â€˜Please explore other things.â€™â€

But when Jammet and his friends Nathaniel Ru and Jonathan Neman were seniors at Georgetown University, they saw an opportunity to bridge a gap between their generationâ€™s values and the unhealthy and uninspiring casual, fast eating options in DC. â€œThe question that started us on the path to Sweetgreen was, â€˜What company can we start that will solve a real problem?â€™â€ Jammet tells Organic Connections.

That problem was the lack of fresh, locally sourced foods for on-the-go students. â€œWe shared the vision to create a restaurant that fit our values,â€ says Jammet. â€œWe wanted to give people options that were healthy but cool, that you could eat every day and wouldnâ€™t feel guilty about eating.â€

Sweetgreen was born. Buoyed by ideas from sustainable food advocates and chefs like Marion Nestle, Dan Barber, Michael Pollan, Jane Black and Nora Pouillon, the three cofounders opened their first restaurant in a converted vacant house near Georgetown University in 2007. Since then, they have been featured in Forbes magazineâ€™s â€œ30 under 30: Food & Wineâ€ and Food & Wine magazineâ€™s â€œ40 Big Food Thinkers 40 and Under.â€

Now in six states, from Virginia to Massachusetts, Sweetgreen has close to seven hundred employees. A new location opened in DC in June 2014, and there is another New York store in the works. By the end of 2014, Sweetgreen will have 29 locations. And the company just signed a lease for its first West Coast location in Los Angeles, opening next year. â€œWeâ€™re very excited to be growing into a national brand,â€ says Jammet.

Cofounders Ru and Neman are from Los Angeles, which had a big influence on how the three envisioned Sweetgreenâ€™s culinary style. â€œPeople there are historically healthier and have had ideas about food similar to that of this generation,â€ Jammet continues. â€œWe wanted to bring California-inspired cuisine east.â€ Eating healthily isnâ€™t just about calories, he notes. â€œWe wanted to create foods that were aspirational too, and build customersâ€™ trust in the Sweetgreen brand to always have those options.â€

One of Sweetgreenâ€™s core values is to â€œcreate meaningful connections every day from farm to patron.â€ Each restaurant has a unique menu that changes with the seasons, featuring organic, locally sourced ingredients. How do they accomplish this? â€œItâ€™s a challenge,â€ concedes Jammet. â€œItâ€™s much harder than using conventional produce. Itâ€™s a lot of work to connect with farmers that you can grow with and plan your menu around.â€ Nevertheless, every one of the stores has a local list of all farms that supply Sweetgreenâ€™s foods. â€œItâ€™s vital that our customers have that transparency,â€ he says.

The businessâ€™s commitment to building local communities is apparent even in their approach to architecture. Restaurants are designed for the particular location, using reclaimed materials. â€œOur stores are designed to shift the communities that theyâ€™re in,â€ explains Jammet. For example, for their most recent store in New York, Sweetgreen â€œhad our New York customer in mind. Itâ€™s sleeker, leaner, with communal stadium seating that we reclaimed from a high school. Those seats push back into a stage and we host local musicians. People always gravitate toward that area of the restaurant.â€

The most surprising thing about the business so far? â€œThe connection between food and music,â€ replies Jammet. Making that connection is at the center of Sweetgreenâ€™s annual Sweetlife Festival. The idea of the festival grew out of opening their second restaurant in Dupont Circle. â€œThe store was very slow to start, so we made a big effort to connect with the community. We hired a local DJ to play outside the store, and we did sampling. It was such a success that a light bulb came on,â€ Jammet says. Next they threw a block party for three hundred people, then another for seven hundred people. This year, the annual festival sold out the Merriweather Post Pavilion in Columbia, Maryland.

Sweetlifeâ€™s purpose is to redefine the experience of being at a music festival, relates Jammet. â€œWe recognized that the most fun day is not necessarily your healthiest day. Sweetlife turns that on its head.â€ The cofounders never thought they would have a music festival, â€œbut we discovered a real connection between food and music,â€ says Jammet. Proceeds go to support their Sweetgreen in Schools partner, FoodCorps, whose mission is to educate students about healthy eating and where their food comes from.

What will Sweetgreen do next? â€œWe believe in staying true to core values but evolving and innovating around the experience of the customer and the world around us,â€ Jammet concludes. â€œFor example, we used to serve yogurt, and we have less yogurt now. We have even more local ingredients and seasonal items. The design of the stores will change over time, in different cities.â€ And the menus and music will always be evolving, he says. â€œBut our core mission and values will always stay the same.â€

To learn more about Sweetgreen and the Sweetlife Festival, visit sweetgreen.com and sweetlifefestival.com.