HomePeople and Company ProfilesOn-trend add-ins, simple packaging help Barney Butter harness the power of the mighty almond
Recent
Latest
4 tips to get ahead of chemical concerns in packaging
May 20, 2022
7 CBD favorites in the increasingly popular gummies format
May 20, 2022
Mission MightyMe helps parents introduce allergens to babies
May 20, 2022
UNFI's Eric Dorne to step down as chief operating officer
May 20, 2022
Trending
Whole Foods' honors 30 companies with 10th annual Supplier Awards
May 18, 2022
Getting ready for 2023: Trends for brands to consider
May 17, 2022
Sponsored Content
The rise of sustainable business – eGuide
Sponsored Content
Natural beauty market trends
Jun 16, 2021 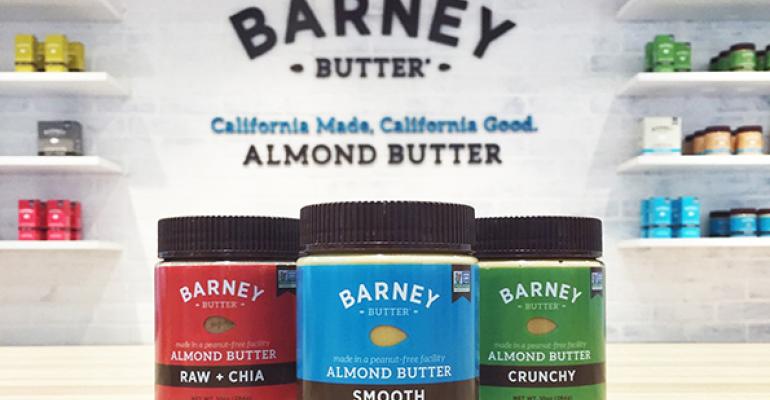 The nut butter category is crowded, but companies like Barney Butter are taking this cupboard staple to the next level.

Anyone who has walked by the peanut butter set in a natural or conventional food store lately knows there are a lot more choices than there were even just a few years ago—almond butter, cashew butter, salt-free, with flaxseeds and the list goes on. From Natural Products Expo West 2014 to Natural Products Expo East 2015, there was a 36 percent growth in peanut butters exhibited and a 16 percent growth in almond butters, according to New Hope's NEXT Trend database.

One almond butter company you’ll likely find in that set, Barney Butter, recently made some tweaks to its packaging in an attempt to stand out on the shelf, as well as to reflect its clean ingredients and to emphasize its most important product qualities. We talked with CEO Dawn Kelley about the company’s growth, its new products and what product attributes it values most.

I see Barney Butter in both natural and conventional stores. Where did you start, and how did that balance evolve?

Dawn Kelley: Whole Foods in Fresno really gave us our start, and we’ve had a long-running relationship with Whole Foods. Then we got on with Publix early on, and we’re the No. 1 almond butter brand in Publix, so that kind of kick-started the conventional thing for us almost simultaneously. I wouldn’t say that we necessarily had that strategy, or that focus—it was just that our brand was a really good fit with the Publix consumer and it took off. And when you have a good story in one big conventional store, it parlays well into other large conventional stores.

We were one of the first Non-GMO Project verified almond butters out there, so natural has always been our focus from an R&D and transparency standpoint. We’re one of the only almond butters that are self-manufacturers; almost everybody uses copackers. We have a plant out in Fresno, so all of our almond growers are right in our backyard. We know our growers; we’re out there in the fields with them, visiting. We know all their best practices. It’s easy to stay on top of new trends and new things that they’re doing to protect the bees or water or whatever it may be if you’re talking to them all the time.

How did you know it was time to refresh your packaging?

DK: We’re the only blanched almond butter on the market. That means we take the skins off the almonds, which gives it a smoother, creamier texture and also removes the phytic acid from the almond, which is something that can make it hard to digest and block digestion of other minerals and vitamins in almonds. We do that, but on our old packaging, in order to identify an almond, we really needed to have a skin-on almond. If you take the skin off, it just looks like a peanut, and we’re a peanut-free facility so that would have been confusing. When we were going through different conceptual ideas of how do we convey a blanched almond and how do we tie that in with our philosophy, we had an “aha” moment of using a transparent almond. That was mostly about bringing clean ingredients and transparency to products, so we felt that the look needed to reflect that message.

There are two claims on the front of the package—peanut free and Non-GMO Project verified. Why are those the most important to you?

DK: We do have a lot of certifications that you’ll find on the back of the jar, but we really wanted to focus on the two that resonate with a core group. We’re one of the only completely peanut-free almond butters out there, and there are 11 million households in the U.S. that are affected by peanut allergies in one way or another. We just did a huge third-party study on this, and 70 percent of the households that did not buy nut butter at retail said that they would buy a brand that’s made in a peanut-free facility. We realized that, while it was on our packaging before, we weren’t really accentuating that, so we were leading the consumer to have to do some more research or email us directly.

With the Non-GMO Project verified—I think that’s going to become commonplace soon. I think the consumer demands it; the consumer wants to know what’s going on with their food supply. It's a matter of taking the extra step to get the certification and put it on the front, so that the consumer's not doing the work. We’ve been a supporter of the Non-GMO Project verified movement since the beginning, so we wanted to make sure that was front and center.

What about organic? Is that something you’ve looked at?

DK: It is. The reason that we haven’t done an organic almond butter in the past is just because of challenges in the supply chain. When almond prices were high, 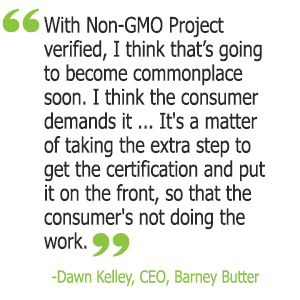 I just did not feel good about putting a $20-a-jar organic product on the shelf. I believe in having affordable food for everyone, and that good-for-you food shouldn’t cost so much more than really bad-for-you food.

I think we’re seeing more conventional crops being transitioned to organic, but that can take several years. I think you’re going to see more organic almonds soon, and now that prices are starting to get a little more realistic, it definitely might be a possibility for us in the future. In the meantime, we’ve made a commitment to use as many organic and/or fair trade ingredients in our products as we can.

You recently released products with added probiotics, protein and fiber, which are all very on-trend. What sparked that?

DK: Our R&D pipeline has been focused on adding healthy inclusions—we started with flax and honey, and then coconut oil and then chia seeds. Along that evolution, we didn’t want to just add a new flavor to the lineup. We really wanted it to be something that would give the consumer more bang for their buck, or more bang for their calorie.

One thing for me is that, I have one vegetarian daughter and one vegan daughter, so my husband and I want them to get enough protein. That’s a concern all the time. I think that we’re moving toward a more meatless society, and—especially millennials—eating more vegetable-based proteins. For me it was a no-brainer to make a product iin which one serving of Barney Butter has up to 10 grams of protein. And I think everyone can use more fiber, so let's make it an excellent source of both.

Can you give us any clues about what's coming next?

DK: We do have some exciting stuff in development that will be an almond-based product and safe for people with peanut allergies, but it's not going to be in a jar.