HomeProducts and TrendsFood and BeverageWe have a plastic problem
Recent
Latest
4 tips to get ahead of chemical concerns in packaging
May 20, 2022
7 CBD favorites in the increasingly popular gummies format
May 20, 2022
Mission MightyMe helps parents introduce allergens to babies
May 20, 2022
UNFI's Eric Dorne to step down as chief operating officer
May 20, 2022
Trending
Whole Foods' honors 30 companies with 10th annual Supplier Awards
May 18, 2022
Sponsored Content
The rise of sustainable business – eGuide
Sponsored Content
Getting ready for 2023: Trends for brands to consider
May 17, 2022
Sponsored Content
Debra Stark’s light shines bright on natural products industry
May 10, 2022

We have a plastic problem 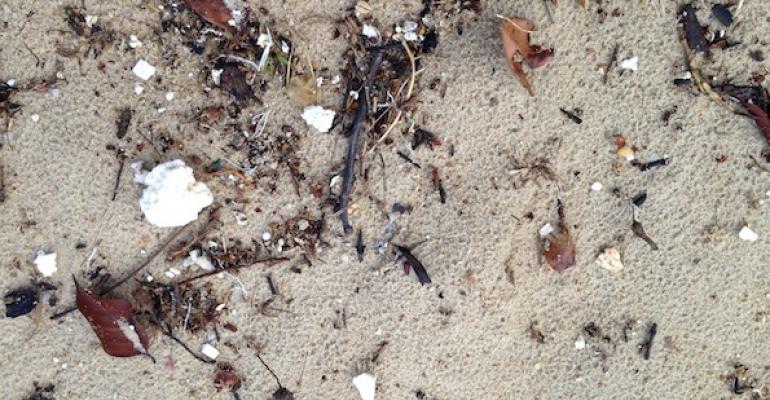 I hope The Graduate is wrong&mdash;plastic should not be the future.

Houston, we have a plastic problem. And it’s a global one, at that.

For the past few days, I’ve been traveling through Singapore, reportedly one of the cleanest city-states in Southeast Asia. Nearly every public bathroom has a meter on the wall where users can rate how clean they think the bathroom is. Public places seem spotless. Spitting your gum out onto the street is illegal. In the main city center, trash is rarely found on the concrete.

But in stark contrast to my home city of Boulder, Colorado, where paper bags cost 10 cents and all clerks first ask if you want your items in a bag in the first place, plastic is everywhere in Singapore. It’s deeply engrained into life.

In grocery stores, cashiers bag cold items, fruit and beverages individually in plastic bags, and then place that in another plastic bag. Takeaway containers are almost always plastic or Styrofoam. Beverages in paper cups are placed in a cup-specific plastic bag to tote around like a little purse, a seemingly useless bag for an already convenient product.

And while I’ve seen many recycling consoles around the city, they often contain trash that does not belong in recycling. Food scraps that could be composted. Plastic bags that gum up recycling centers. Trash bins often contain recyclable cans and bottles.

Besides on the streets, I’ve seen plastic trash everywhere. Take a handful of sand by the beach and it’s dotted with small rounds of colored plastic and pieces of Styrofoam cups and containers. Most surprising, I saw plastic piling up on a remote island outside Singapore—bags wrapped around mangrove trees and crushed Pepsi cans in the dirt. A lizard scampering over a plastic Coke bottle.

Plastic waste is maddening not just because it accumulates in bodies of water where marine life mistake it for food, nor because it adds to the estimated 11 million tons of floating plastic covering “an area of nearly 5 million square miles in the Pacific Ocean,” according to the Environmental Cleanup Coalition. But plastic is even working its way back into our food supply. A recent study by Chinese scientists found that microscopic pieces of plastic are present in sea salt, and even salt sourced from lakes. After testing fifteen brands of common table salt bought at supermarkets in China, researchers found particles from the common water bottle plastic polyethylene terephthalate, cellophane and more.

While it’s not yet clear the effect of such plastic contamination in sea salt on human health, the study does indicate plastic pervasiveness.

So what can we do about it?

On a personal level, when I return to the States I am motivated to reduce plastic in my life. I’ll bring my own cloth bags to buy bulk grains and nuts, and try making my own hummus and dips to save the plastic container. I vow to never buy water bottled in plastic again unless I’m dying of thirst in a desert.

On an industry level, I’m confident that the collective of natural brands called OSC2 (Organic Sustainable Community Squared)  will drive the solution to environmentally friendly plastic. At Esca Bona, CEO of Numi Tea Ahmed Rahim said plastic packaging is the Achilles' heel of the natural products industry. Given that plastic pollution is a global problem, cutting plastic use just a little bit is not enough. We need compostable packaging that effectively biodegrades in a home composting system. This isn’t wishful thinking. Brands like Alter Eco, Numi and more have already brought compostable packaging to market.

Finally, education and awareness at the consumer level must continue. What happens to that bag after it’s used? And is throwing away a plastic bag worth it, considering the extraordinary resources used to make it?