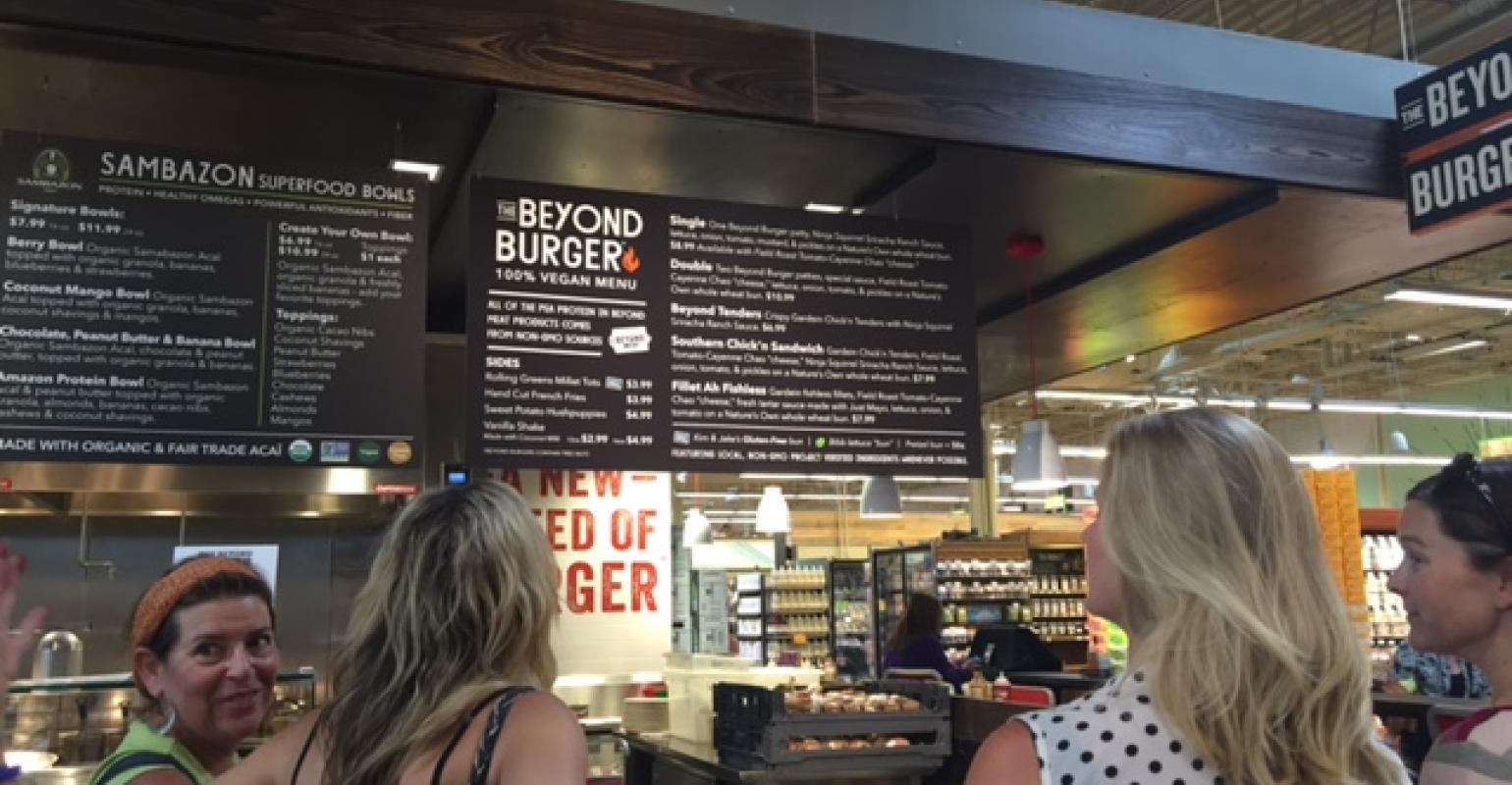 We tried the Beyond Burger (and wrote poems about it)

Beyond Meat’s groundbreaking plant-based burger is sold at only one store in the nation. That store just happens to be 3 miles by bike from the New Hope Network offices. So we tried it.

Whether it’s sampled on the Natural Products Expo show floor, cooked up in the office kitchen or torn out of the packaging right on an editor’s desk, if it’s natural, organic or gluten-free, chances are the New Hope Network team has tried it.

Just don’t ask us to remember all of it.

But on Monday, we tasted something few of us are likely to forget. The Beyond Burger, a ground-breaking product from Beyond Meat that’s so meatlike it's sold in the meat section, is also so new it’s only available at a single Whole Foods Market—the one 3 miles of bike path from New Hope Network office (they even have Beyond Burger Bar with professionally trained Beyond Burger-istas!).

So we rode there, 11 of us, all on bikes, and tried the next big thing in plant-based protein. Here’s what we thought, in haiku and review.

Meaty, but not meat
“Burger” without irony
A plant-based triumph.

A game changer—this is the first veggie burger I’ve ever had that can legitimately be called a “burger.” Everything else should now be considered a patty or a puck. The Beyond Burger texture is spot-on. The taste is damn close. I could easily have been fooled into thinking it was the real thing. There is a slightly “seedy” note at the end, but if it were on the menu at a burger place, I would be inclined to order it over the meat version. I call myself a “less-a-tarian” because I keep eating less and less meat, but a good burger was a sticking point keeping me from going full veggie. The Beyond Burger just took away one more excuse.

Having not eaten a real burger in over two decades, I found the Beyond Meat burger to be creepily similar to actual beef. The color and texture would probably appeal to meat eaters, but I’m not someone who wants to believe they’re eating cow. However, the toppings (tomato, lettuce, onion, pickles, spicy sauce) and fresh whole-wheat bun made this “burger” quite tasty. I could appreciate the ingenuity, but I prefer to stick to my veggie burgers that aren’t trying to be like the real thing.

In the face of our overwhelming crowd of 11 descending upon the bar simultaneously, the service was friendly, courteous and efficient. The burgers upon delivery were cooked perfectly and surprised even the core meat eaters with their “meatiness." The flavor and texture were satisfying and not grainy. But I, this burger imbiber, was underimpressed with the condiments—after all, this is Whole Foods Market, peon to fresh and seasonal. Why were the tomatoes not the stuff of late August heirloom deliciousness? Overall a tasty excursion, but plant-based eaters deserve great pickles and tomatoes!

If you brought a friend in for a no-burger cheeburger, they likely wouldn’t know it wasn’t a cow.

I had high hopes for this much-anticipated summertime swap, and Beyond Meat sure delivered. Outfitted with all the fixin's—special (vegan) sauce, lettuce, (Field Roast chao) cheese, pickles, onions on a sesame seed bun—the Beyond Burger was a mightily satisfying lunch that provided 20 grams protein per patty. While some reviews tout that the burger actually “bleeds," let's be clear: it is red in color, but Beyond Burger definitely doesn’t bleed. And while it resembles meat in appearance more than any other vegan burger I’ve seen, it isn’t an exact replica of the beef burgers of backyard yore. What Beyond Burger does do, however, is awaken a primal, dormant instinct in this vegetarian’s medulla oblongata that craved a protein-dense sandwich, hewn by flames and smoke. So yea, I liked it.

Too much, not enough?
Will it be a gateway food?
Just for the willing.

Darn good burger! That’s the bottom line. But it begs the question: why? Why, that is, must it taste so much like meat? To embark on the fun and convenience of bun-as-delivery mechanism, a vegan burger need only be tasty and patty-shaped. There’s no imperative, in my book, to taste like beef. Unless, that is, to convert the meat-committed to plant-based eating. But here’s the thing: no one is going to fool their beef-lovin’ uncle Bob with Beyond Burger. Meaty density? Check. Beefy flavor? Check. Fatty juices of a hand-pressed beef patty dripping down my beard (gross, I know)? Nope.

In the end, I see a narrow market: the uncle Bobs who are interested in transitioning to plant-based eats. Yet it will be ineffective for the reluctant and unnecessary for the already converted. Will the transitional dieter be fooled? No. Will he be satisfied? Yes.

Beyond Meat rolls out 2 burgers with GrandFusion
Mar 24, 2015