HomeProducts and TrendsFood and BeverageWhy Save Our Wild Salmon matters
Recent
Latest
Podcast: What brands need to get on shelf at Fresh Thyme Market
May 24, 2022
Natural Habitats releases Palm Positive+, A Reference Guide
May 24, 2022
The Planting Hope Company aims to prove gender equity leads to success
May 23, 2022
4 tips to get ahead of chemical concerns in packaging
May 20, 2022
Trending
Whole Foods' honors 30 companies with 10th annual Supplier Awards
May 18, 2022
Getting ready for 2023: Trends for brands to consider
May 17, 2022
Sponsored Content
The rise of sustainable business – eGuide
Sponsored Content
Natural beauty market trends
Jun 16, 2021
Natural Vitality
brought to you by

Why Save Our Wild Salmon matters 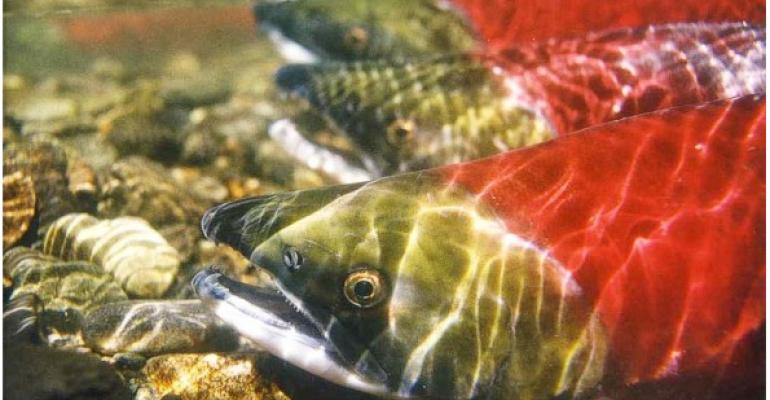 The life cycle of a salmon is one of nature’s unique and fascinating processes. Born in fresh water, young salmon head to open sea, where they live out their adulthood. Then, spurred on by some mysterious signal, they leave salt water behind and return to the cool rivers of their birth, to spawn and die.

The journey of the Snake River sockeye salmon is even more remarkable, for in returning to their headwaters, these salmon climb nine hundred miles against the current, gaining almost seven thousand feet in elevation.

Sadly, that’s a sight few people today have seen. While the Snake River and other waterways of the Columbia Basin once teemed with salmon, nowadays their numbers are vastly diminished. But if Save Our Wild Salmon is successful, someday these rivers will thrive again.

Fighting Evolves into Figuring It Out

“In the late eighties, as salmon populations in the Columbia Basin declined, there was a realization that the old way of doing business wasn’t working,” Joseph Bogaard, executive director of Save Our Wild Salmon, tells Organic Connections. Previously, sport fishermen, commercial fishermen, conservationists and tribal groups often fought against each other for a share of the remaining salmon. But with the founding of SOWS in 1992, Bogaard asserts, “These interests came together in unity to work on issues that would protect and restore these salmon populations.”

At the time Lewis and Clark first traversed the area, as many as 16 million salmon made the annual return to spawn. Now, with dams placed along rivers for hydroelectric power, flood control and navigation, as few as 10,000 fish make it back to the Snake River’s headwaters. “Today,” Bogaard muses, “the Snake River coho is extinct, and the remaining populations of chinook, sockeye and steelhead are threatened or endangered.”

The impacts of this decline are enormous. For tribal groups who relied on the salmon for sustenance, and communities who supported themselves through fishing and tourism, the impacts are obvious. But less known is the salmon’s role in ecosystem health; the millions of pounds of organic matter from fish who returned each year to die helped build and feed the forests of the Pacific Northwest.

“Salmon are an amazing, fecund resource,” Bogaard enthuses. “If you get out of the way and give them what they need, they will keep coming back and sustaining themselves at almost no cost.”

For salmon on the Snake, a major tributary of the Columbia, the biggest issue is a series of dams spanning the lower river. “While flood control and clean power production have provided great benefits, not all dams are created equal,” Bogaard opines. “We also need to look at ecosystem health and species survival, and promote the recovery of fish and wildlife.”

Save Our Wild Salmon and other groups argue that the four dams on the lower Snake River provide little flood protection, while deeply impacting salmon populations. Many of the dams in the basin are governed by the US-Canada Columbia River Treaty, ratified in 1964.

Reflecting its time, the treaty looks almost exclusively at flood control and power production, without examining healthy rivers and watersheds, endangered species or tribal cultures. But this September, fifty years after the treaty’s enactment, the window has opened to change key provisions. “Hopefully,” Bogaard says, “we’ll get a modernized treaty that provides for systemic changes and a broader management perspective.”

Through the efforts of Save Our Wild Salmon, there may come a day when the waters of the upper Snake River again churn with countless silver forms, returning home.

Learn more about Save Our Wild Salmon and the Columbia Basin watershed.