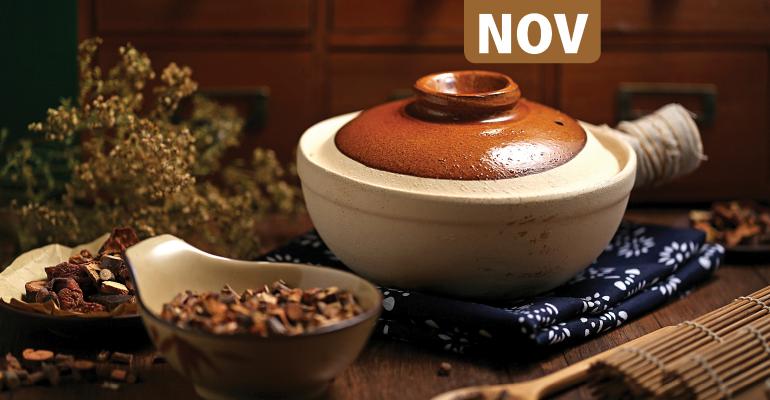 “It’s far more important to know what person the disease has
than what disease the person has.”

The notion of the universe as a great and complex machine is compelling: intricate pieces interconnected and interdependent. Solar systems, planets, humans and cells, all machines within machines.

It’s not just compelling, but culturally pervasive. Yet, it wasn’t until the 17th century that this mechanistic framework—originally introduced as the clockwork universe—was put into heavy rotation. Today it dominates all sciences, and within it is the reduction of life to its parts and pieces, however minute. The chemicals, tissues, bacteria, viruses, etc., of pathology, therefore, become the cogs and springs of medicine, each to be eliminated, replaced or otherwise addressed to ward off disease—with only ancillary regard for the whole of the being they reside within.

“If you look at the many centuries of traditional uses of botanical medicines, [these] would have to be considered nutrigenomic in nature,” says Greg Cumberford, VP of Nature’s Crops International, a company developing new plant-based ingredients. Cumberford defines nutrigenomic as “existing at the nexus of an individual’s genomic makeup and their nutrition front.”

“So, yes,” he says, “our original indigenous wisdom traditions were, in essence, personalized medicine.”

Wellness, Cumberford believes, “comes from the air, water and primarily herbivorous nutritional sources that our biology expects.” Over generations, nutritional needs become simultaneously personalized and place-based. “Our biology, as we come into the world, expects the same sorts of nutritional inputs from the place that our ancestors came from,” he says.

Aligning with those biological needs has become challenging, Cumberford believes. “In most cases in the industrialized world, we provide a standardized ration of a very limited set of food sources and force feed or force fit our genome to those inputs.” The breadth of available botanical inputs can fill the gap. 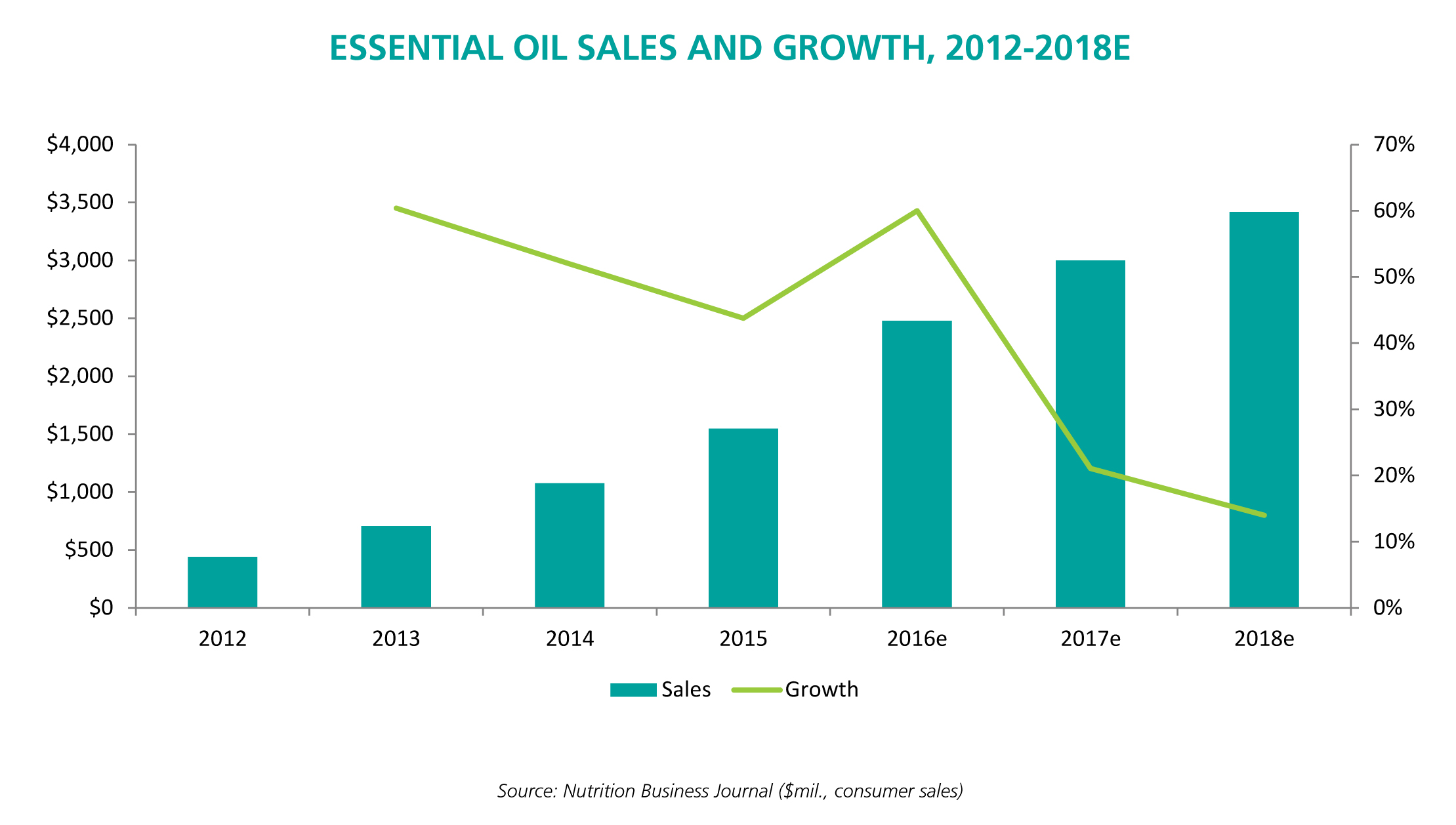 “In traditional medicine, we use complex formulas to treat complex people with complex problems,” says ethnobotanist and author David Winston, RH (AHG) founder of both Herbalist & Alchemist and the Center for Herbal Studies.

This starts with recognizing the synergies of herbal formulations. “When you are dealing with the complexities of something like a metabolic syndrome or diabetes or arthritis or any number of other conditions, taking a single herb is unlikely to deal with the multitude of issues that are occurring,” Winston says.

Specific synergies have been identified over centuries, “not just by throwing a bunch of stuff together,” he says. “When I go into a health food store, I’ll look at formulas and I’ll go, ‘Wow, that doesn’t make much sense!’ But I understand what they did. They went on PubMed, they looked up herbs that deal with a given condition. They found five herbs where there’s a clinical trial on the individual herb. They figured, they’ll throw them together. That’ll be a good formula.”

Instead, he says, looking into the traditional uses, whether traditional Chinese medicine, Ayurveda or others, “you will find that, behind almost every formula, there is a duo or a triplet of herbs that are almost always used in combination. There’s this idea that using herbs in an intelligent combination gives you something greater than the sum of the parts.”

P.K. Davè, founder and CEO of Nature’s Formulary, agrees. His company’s Ayurvedic formulas are all substantiated by traditional texts. The diagnostics of Ayurveda are a good example of personalization, a process that begins with guiding generalizations, codifying patients as one of three “doshas” or, more likely, a combination thereof.

“We have to talk about doshas because your body type is so inherent in Ayurveda. It gives folks a system to look at themselves,” says Davè. “The doshas define your constitution, why you are tall or short or why you are creative or good at engineering and math and can only draw in stick figures. It also defines your physical make up, that’s why some people are very strong in terms of digestion and some are weak,” which has immune implications, he says.

The dosha provides patients and practitioners a basis for long-term constitutional and lifestyle prescriptions. It can also provide a fast track diagnostic base for more acute conditions. From the generalization, Ayurveda can become very personalized, tailored to the specific individual and the specific condition.

Aikido and the superbug

Even within individual herbs, there are multiple chemical compounds at synergistic play. Drilling down to singular compounds can often miss the point. Citing Dr. Bharat Aggarwal, the turmeric expert, Winston points to the now widely accepted understanding that curcumin is 30 times stronger than turmeric. But those tests were in vitro, he says. “In vivo—which is how we’re using it, we’re not giving it to test tubes, we’re giving it to people—curcumin, as an entity (without being attached to phosphatidylcholine or bioperine or other techniques that people have used to make it more bio-available) is poorly absorbed and quickly excreted, which is a terrible combination.”

Within turmeric are compounds that enhance the absorption of curcumin, Winston says. “There are studies by Dr. Aggarwal showing that a curcumin-free turmeric product had just as much anti-inflammatory activity as curcumin did. Since identifying the curcuminoids as the active constituents of turmeric, they have identified at least a dozen additional active constituents that aren’t in the curcumin products.”

Herbs are complex chemical entities, Winston says. “When we try to bring it into the drug model of having a single molecular compound or, in this case, a single constituent that is active, we often find that they don’t necessarily work as well.”

Cumberford, however, points to raw material efficiency as a motivator for continued research into increased bioavailability of specific compounds. In either case lies an opportunity for innovation: whether with branded ingredients or complex formulas to match up with personalized nutritional prescriptions. 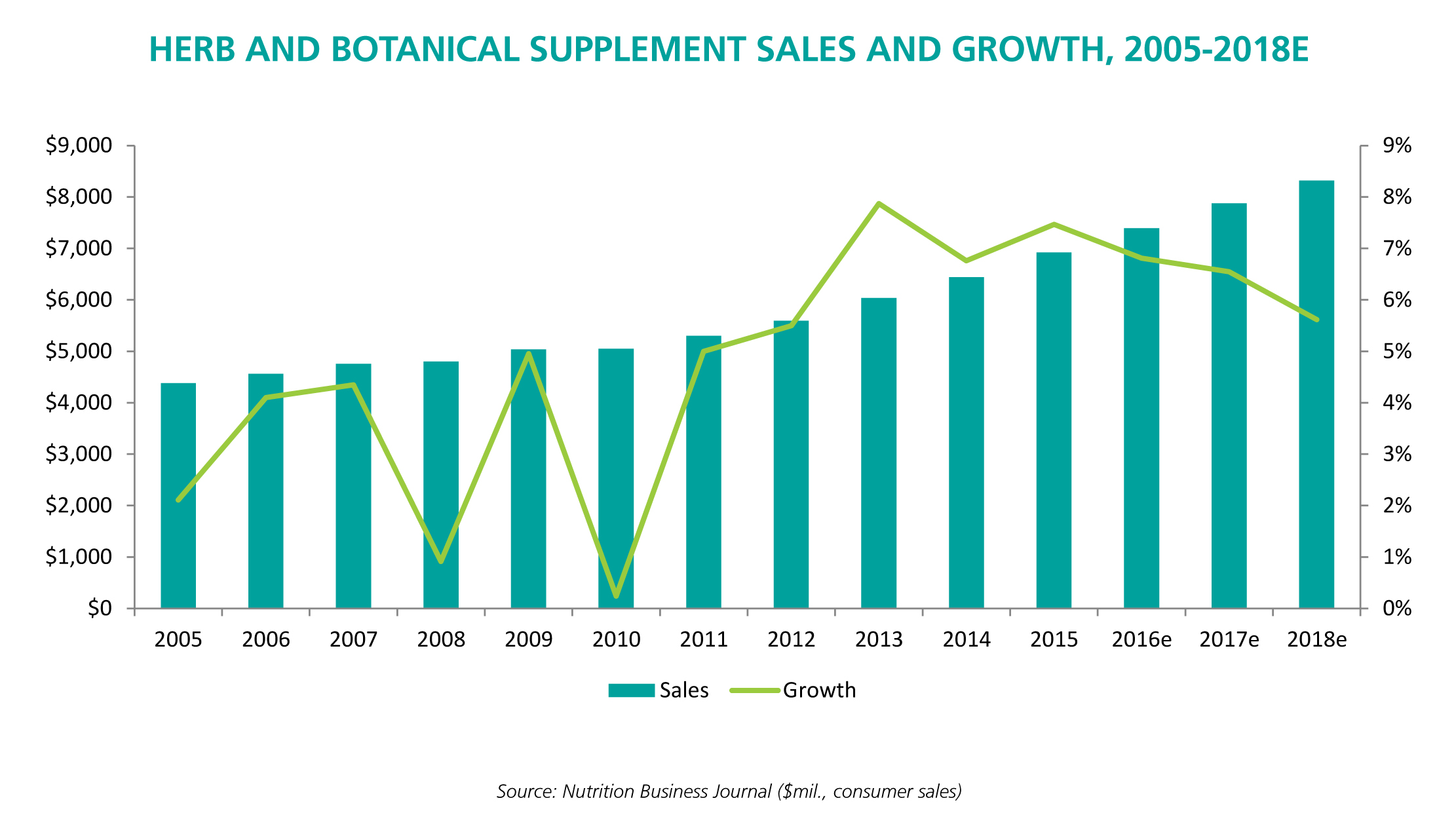 While the implications of the dusk of antibiotics has horrifying implications, Cumberford says “the good news in this is that coevolved adapted plant-based ingredients can be effective in this. For example, goldenseal has berberene and hydrastine alkaloids that effectively shut down some superbugs’ ability to resist the effect of antibiotics.” In some cases, common plants can be effective. “Plants like garlic, which doesn’t kill off the superbugs, but inhibits their ability to recreate and transfer their resistant genes to other bacteria. So it’s a much more adaptive approach.” He compares it to the martial art aikido. “It’s about neutralizing and containing the risk as opposed to trying to annihilate the pathogen. Because in the fertile, fecund biological world we live in, that scorched earth annihilation strategy never can work fully. So, the adaptive approach of using coevolved, well recognized, traditionally backed medicines is really compelling.”

Ironically, the micro-cogs of personalized medicine may provide a fresh opening for herbs. The business opportunity today might be to find the complement between reductionist diagnostics and holistic therapeutics.

“The burden is on the practitioner to understand ‘who is the patient in front of me?’ in terms of their genome and their most likely responsive influences based on things like blood type and constitution,” Cumberford says. DNA and epigenetics can help with this, and help practitioners focus on patients over pathologies.

“One of the things that you find in all traditional systems of medicine,” Winston says, “is the focus is treating the person, not the disease. The more you can understand the underlying issues that that person has, the more effective your treatment’s going to be.”

Asked about the viability of a business providing individualized formulas with long-term efficacy, Winston said maybe. “If you are dealing with something where, for instance, somebody gets chronic urinary tract infections, you could probably design a formula that you could take over a significant period of time that you might use every time you start feeling like you’re getting a UTI.” (A good clinician would also look at why they are getting the UTIs, he adds.)

On the other hand, he continues, “if you are talking about more of a constitutional formula, then over time, that’s going to change. A formula that worked when you were having acne outbreaks in your 20s might no longer be appropriate for somebody who’s now in their 40s and starting to have much more significant GI issues.” Twenty years is a long time, though. The opportunity may exist for customized constitutionals that remain beneficial for shorter, but still useful, periods.

Taking the complexities of hyper-customized herbalism to retail shelves is challenging. But Nature’s Formulary’s Davè believes consumers don’t expect grab-and-go simplicity. “The mindset of the consumer is already there that, while it might be more convenient to grab a product that says ‘weight loss’ and run away with it, they need help to figure out what else they can do in life,” he says.

The company supports retailers with in-store training and consumers with a robust website. An online test helps individuals identify their dosha and then tailors recommendations for specific herbal treatments. Even so, quality self-serve herbalism differs from true personalized herbalism.

“If you’re an informed person and you’ve read about [specific herbs] and you understand that there’s a structure/function benefit you can gain from it, that’s not personalized medicine, that’s just responsible self-care,” says Cumberford.

With awareness of a predisposition, however, “there’s a whole fleet of avoidance strategies in terms of not provoking those disease states through your diet, but then also supporting that—whichever physiological system we’re talking about—with a complete customized diet and lifestyle approach. That, then, is personalized medicine,” adding that this would almost always be carried out with a practitioner.

Traditional herbal medicine might be the original personalized medicine, but to fit in today’s mail order personalization it must exist as a prescriptive subset of the diagnostics. The business opportunity, therefore, is to add specified herbal formulas to the list of lifestyle, pharmaceutical, dietary and supplement prescriptions spat out by the algorithms of the marker-based tests.

Said differently, while responsible self-care will continue to have a rich future on retail shelves, true personalized herbal medicine will remain as it always has been: practitioner-assisted. Even so, a holistic herbal company just might find a big opportunity with the strange bedfellow of reductionism.

If viewed carefully, the clockworks need not obscure the clock.

The next frontier for personalized nutrition
Dec 06, 2016