Make that 2 apples a day keeps the doctor away 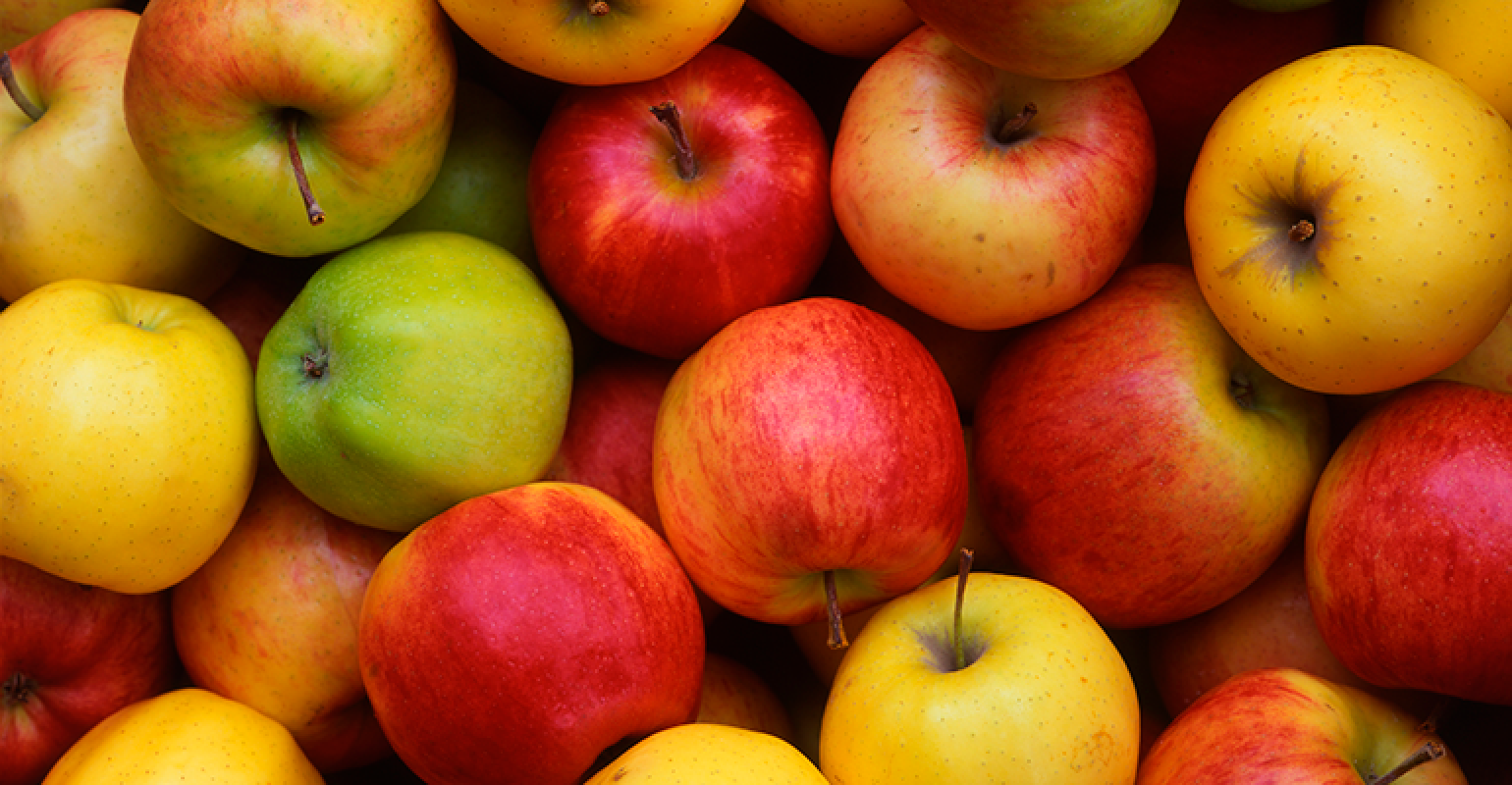 New research shows eating apples leads to better cardio health among those with mildly elevated cholesterol. Plus, read on to see which variety of apples is healthiest!

We’re all familiar with the old adage, “An apple a day keeps the doctor away.” It’s right up there with Hippocrates’ “Let food be thy medicine and medicine be thy food” and “You are what you eat” in the annals of nutrition aphorisms.

Apples make a great presentation in the produce section of your store. A new study validated the saying.

Published in the February issue of the American Journal of Clinical Nutrition, the new study ups the ante, finding that not one but two apples drive beneficial effects, at least on markers of cardiovascular disease.

In the study, 43 British adults ate two Renetta Canada apples a day. The two apples contained 8.5 grams of fiber a day. The study subjects at the outset had cholesterol levels ranging between 200-239 ng/dL—considered “borderline high” as the total cholesterol number everyone knows is to keep things below 200.

By the end of the eight-week study, the apple eaters experienced a modest 3.6% reduction in total cholesterol and LDL cholesterol as well as a 10% cut in triglyceride levels. By comparison, statin drugs lower total cholesterol at least 20% and, depending on the dose, can double that amount—or more.

“The potential ability of apples to reduce serum total cholesterol has been attributed mainly to the fiber fraction, pectin in particular,” wrote the researchers. “However, polyphenols may also play an important role.”

Apples are excellent sources of fiber (about 2-3 grams per apple), which can improve bowel movements and so-called “transit time.” This apple fiber, or pectin, helps digestion because it helps turn water into a gel in the intestines, which slows down the digestive process. The pectin is largely found in the skin.

The British researchers cited previous studies that showed pure apple polyphenols at daily doses between 600 and 1,500 mg also decreased total cholesterol and LDL cholesterol. The amount of pectin might not be sufficient alone to lower total cholesterol, which gives credence to the idea that polyphenols also play a role.

A recent study, from 2020, also looked at eating apples vis a vis cardio conditions. It found an apple a day was associated with a reduced risk of death by cardiovascular disease, heart attacks and strokes. Like the new study here, this 2020 study found an apple a day reduced total and LDL cholesterol, as well as systolic blood pressure and C-reactive protein, a marker for inflammation.

While the decrease in cholesterol levels was just modest, plenty of other studies show apples have other positive health benefits.

Type 2 diabetes: A few years ago researchers conducted a meta-analysis concerning apple as well as pear consumption as it relates to type 2 diabetes occurrence. They identified five studies comprised of more than 228,000 participants. They showed that eating apples and pears was associated with an 18% reduction in the risk of diabetes. What’s more, every day per week people ate an apple was associated with an additional 3% risk reduction.

Cancer: A German cancer researcher concluded that an apple a day seemed to reduce the risk for lung and colon cancer. Food frequency questionnaires are not exactly precise because people cannot reliably remember every food item at every meal. Still, a 15-year study among women older than age 70 found those said they ate an apple a day had a lower risk of deaths by any cause and also specifically by cancer.

Microbiome: Apple skins hold most of the nutritional value. The polyphenols therein are hardy enough to last all the way to the lower GI tract. There, studies show the apple components actually change the microbial composition and can otherwise positively interact with the gut microbiota. One study found the Renetta Canada apples improved microbiota composition. That’s because pectin in apples is a fiber, which is the food source of bacteria. One study, which also used two apples a day, found that after two weeks, the two apples a day increased the numbers of bifidobacterium and lactobacillus in stool samples of the people being studied.

Which apple varieties are best?

Think that if you’ve seen one apple you’ve seen ’em all? Of course you don’t think that–it’s why retailers put out a range of apple varieties.

Apples are delicious, except for the red delicious type, which no doubt got its name because it actually is not so exceptionally delicious. (Remember the Flavr Savr tomato, the first GMO tomato? It was created so it was firm and could be shipped around the country; flavor was the last thing the scientists had in mind.) And like so many things in the fruit and vegetable world, the health benefits come largely from the skin.

One study looked at a variety of apples—red delicious, granny smith, fuji, golden delicious and annurca. When looking two apples a day on at total cholesterol and LDL cholesterol, annurca fared best, lowering levels by 8.3% and 14.5%, respectively, and an increase in HDL by 15.2%.

Another study looked at the antioxidant activity and anti-cancer activity of a range of apples. These included Rome beauty, idared, Cortland and golden delicious applies. The researchers noted that the peels contained the highest antioxidant activity, most of the phenolic compounds and were the part of the apple that most effectively inhibited the growth of human liver cancer cells.

The apple varieties with the highest total phenolic contents and flavonoids were the idared and Rome beauty. Idared apple peels had the most anthocyanins and greatest antioxidant activity. Rome beauty apple peels showed the most bioactivity.

And you know how it’s fashionable around camp to say that eating an apple is a decent replacement for brushing teeth? One recent study found that eating an apple is similar to tooth brushing in terms of reducing bacterial viability in the saliva. However, it does not remove dental plaque. In a pinch, an apple a day might just fill in the gap, but in the long term they will not keep the dentist away.