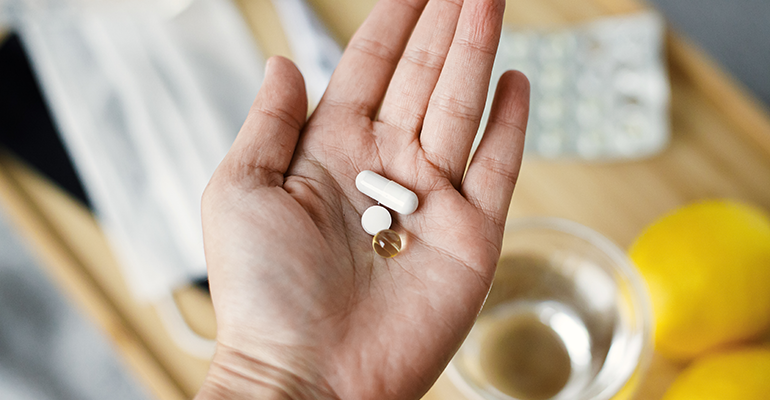 Fraught with problems, a nutrition study still found a reduction of symptoms by more than a day for supplement takers over the regular standard of care.

When it comes to nutrition science, there are a couple aphorisms that demand reheeding today: One study does not a conclusion make, and any time you see researchers declaring their study to be the definitive conclusion, that no further studies ever need undertaking again, that the compound in question absolutely 100% does not work—take those results with a grain of salt.

Researchers with integrity, when pressed to make larger statements about the utility of a studied bioactive, will always keep their conclusions close to the vest—“All we demonstrated,” they will tell you, “Is this ingredient with that study population with the dose used resulted in these effects this much of the time.”

Researchers with integrity are loath to go out on a limb.

Researchers with an axe to grind, with a clear and present bias, go too far the other way.

So it is with a new study published in the vaunted Journal of the American Medical Association JAMA Open Network.

The study had good intentions—supplying a COVID-19 population with vitamin C and zinc to see if their outcomes improved significantly. After all, many studies have shown such results with vitamin D in COVID-19 patients.

Zinc is known to play a role in immune function via antibody and white blood cell production. Vitamin C has some studies showing it could be protective against the novel coronavirus.

Researchers used 50 mg zinc and 8,000 mg vitamin C. They determined if patients achieved a 50% reduction in symptoms, the study would be a success. They enrolled 529 adult outpatients with confirmed infections.

Problems with the study's execution abounded

For one, complementary physicians assert at least 75 mg/day zinc is required to aid in COVID-19 symptoms, in the form of zinc gluconate lozenges, taken in many doses throughout the day.

For two, doses roughly above 4,000 mg vitamin C/day tend to lead to diarrhea—and that was cited as a primary adverse event in the vitamin D group.

For three, only 214 patients ended up participating, making any benefit difficult to tease out.

This is why the researchers ended the study prematurely after 10 days, for “futility,” before the 28-day trial was planned on concluding.

Even so, patients who took no supplements achieved a 50% reduction in symptoms in 6.7 days. Those taking zinc got to 50% reduction in 5.9 days. Vitamin C, and the combination of vitamin C and zinc, both got patients to 50% in 5.5 days.

That means supplements helped the patients get reasonably better about a day and a quarter faster. That’s nothing to sneeze at, though because of the small population size in the study the researchers concluded that the supplements did not work.

“Based on the current study,” concluded the researchers, “these supplements cannot be recommended to reduce symptom morbidity in such patients.”

There is much to kvetch about.

The study was conducted at The Cleveland Clinic. The accompanying editorial slamming supplements was written by physicians at John Hopkins University.

“These 2 supplements,” wrote the Johns Hopkins doctors, “failed to live up to their hype.”

The editorial opened with a quote from Neil deGrasse Tyson, “The good thing about science is that it’s true whether or not you believe in it.”

This was meant to pave the way for looking askance at the entire concept of dietary supplements.

They even found time to disparage vitamin D—but not for COVID-19, but for cardiovascular disease.

Ironically, the editorial contained a half-dozen reference citations, one of which concluded that vitamins A and D show potential benefit in COVID-19 cases, especially in deficient populations. It also concluded that selenium and zinc have shown favorable immune-modulating effects in viral respiratory infections. Probiotics were also found to “have some role in enhancing immune functions.”

But that didn’t stop the editorial writers from maligning the supplements, even under the less-than-stellar study design.

“It’s not surprising this weak study design and haphazard approach would lead to unclear results,” noted Steve Mister, president and CEO of trade group the Council for Responsible Nutrition. “What’s more disappointing is that JAMA published it at all and accompanied it with a commentary that recklessly makes broad generalizations about the role of dietary supplements in the prevention and treatment of COVID-19. The sleight of hand potentially deters future research that may demonstrate the valuable role nutrients play in supporting immune function over time and preventing COVID-19 in particular.”

Mister pointed out the many specifics in the study that should lead to “appropriate skepticism.”

For example, the study used an open-label design with no placebo arm and had major differences in the health status of participants by group. More than 29% of subjects in the vitamin C and zinc group had a history of diabetes compared to 6% in the standard of care group, and people with diabetes are at increased risk of severe illness from COVID-19. The vitamin C and zinc group also had higher rates of hypertension, dyslipidemia, and smoking compared to the standard of care group, any of which may lead to worse outcomes in individuals with COVID-19. In addition, the study failed to stratify participants by age, sex, race or duration of symptoms prior to testing, which would have allowed the researchers to analyze the results on a more comparable basis.

“Despite these challenges,” said Mister, “patients who received vitamin C or vitamin C and zinc achieved a 50% reduction in their symptoms 1.2 days sooner than the standard of care group.”

Then Mister got to the meat of the matter, of how the mainstream medical community—with little to no nutrition education while in medical school, and raised on the paradigm of pharmaceuticals and surgery—forges ahead with a clear bias against nutrition and supplements.

“Even more disturbing,” said Mister, “is the commentary by Michos and Cainzos-Achiria that cites the study as evidence that ‘rigorous science’ challenges ‘popular beliefs’ and demonstrates how these supplements fail to ‘live up to their hype.’ Their editorial reads like a conclusion in search of a premise: that dietary supplements should be viewed as a waste of time just waiting for science to disprove their presumed benefits.

“This kind of misapplication of a poorly conducted study has the potential effect of dissuading other serious researchers from investigating the potential of a wide range of supplements, such as vitamin C, vitamin D, zinc, melatonin and others, for their ability to support immune function and resistance to respiratory infections, including COVID-19.”

Not the first, won’t be the last

Perhaps the most infamous and inflammatory use of supplements-bashing was in the December 2013 Annals of Internal Medicine, where researchers published a separate editorial titled, “Enough Is Enough: Stop Wasting Money on Vitamin and Mineral Supplements.”

The springboard to the editorial was three research papers published in that issue.

One was a meta-analysis of 27 studies concluding that multivitamins had no effect on preventing death, cardiovascular disease or cancer. The thing of it was, only three of the studies were on actual multivitamins. And of those three, two of them were on a total of some 27,000 subjects and found a lower cancer incidence in men taking a multivitamin for more than 10 years. A study on women showed no difference.

The second paper cited as a reason for the “don’t take vitamins” editorial was to see if vitamins given to people who already suffered one heart attack would prevent a second. And the compliance rate was less than 50%—meaning most people didn’t even take the multivitamin.

The third paper was an investigation of data from the Physicians Health Study II trial, on whether well-nourished physicians who take multivitamins suffer cognitive declines later in life.

The conclusion was multivitamins do not help—but the very same study population, in a paper published the year prior, found that a Centrum brand multivitamin did indeed prevent cancer for this group of doctors.

Oh well. Nevermind. Just another salvo in a greater campaign to discredit supplements, with the implicit conspiratorial theory that pharmaceutical drugs are the only way to improve lives.

Supplement retailers are all too familiar with this story.