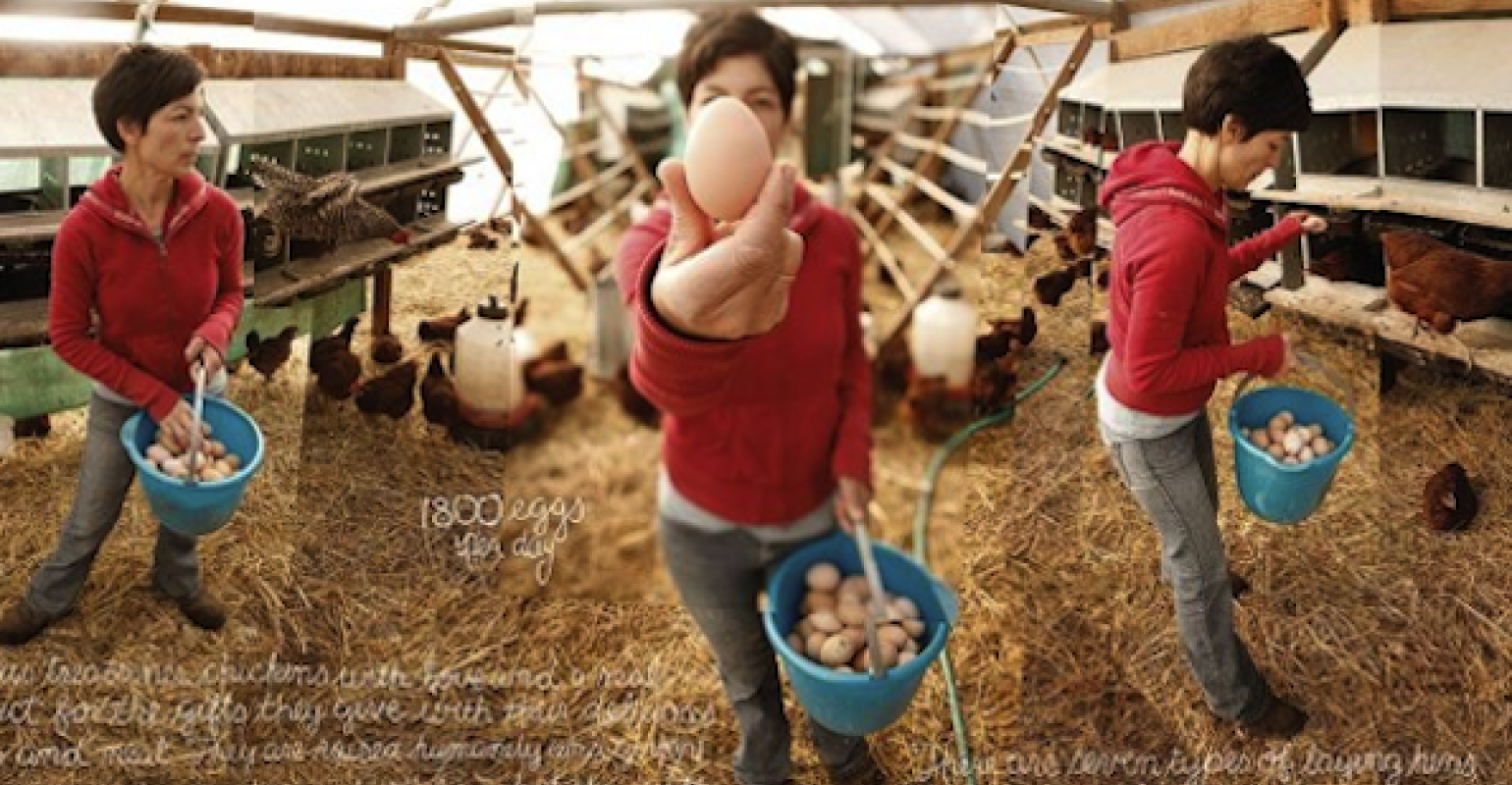 The Lexicon of Sustainability uses beautiful images and videos to help educate consumers on complex topics around sustainability. What can your store learn from this approach?&nbsp; 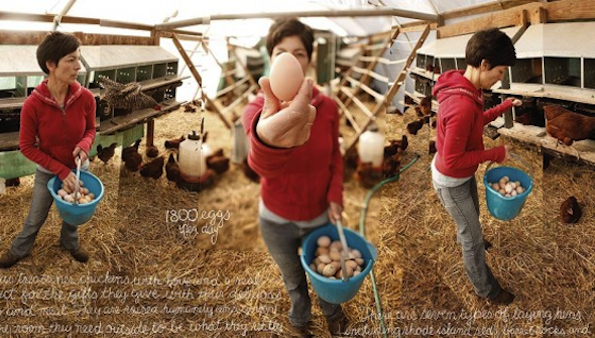 “What’s lovage?” my daughter asked once while we ate lunch at Alfalfa’s Market in Boulder, Colorado. She was pointing to a poster with a striking image depicting nearby Black Cat Farm and Restaurant—with the words FARM TO TABLE in large print. In the image, Chef Eric Skokan prepares eye-catching greens labeled lovage. This was several years ago, but recently at school when asked to imagine a business she’d create, my daughter had no doubt: “I would open a farm-to-table restaurant.”

I later learned that the beautiful, evocative poster was part of a nationwide project called the Lexicon of Sustainability, a series of compelling images and short films illustrating concepts as complex as biodiversity, food security, traceability and soil fertility. The Lexicon of Sustainability project “uses the power of art to convey a complicated idea in a straightforward way,” Douglas Gayeton, co-founder of the Lexicon, tells Organic Connections.

Sparking curiosity in my daughter was just the sort of impact that he and his wife, co-founder Laura Howard-Gayeton, set out to make with the Lexicon, Douglas Gayeton says. The Gayetons co-produce the Lexicon and other projects with Rumplefarm, their multimedia production company based in Petaluma, California. “Our project uses the graphical language of young people, because they are the ones who are going to change our food systems,” he explains.

With the Lexicon at the hub of their work since 2009, the Gayetons have reached millions of viewers and grown a substantial following via their website, social media, PBS and other video outlets, publicly curated “pop-up” art shows, and published books. This year they will be rolling out a brand-new education program based on the Lexicon in schools across the US.

The Lexicon project actually started with the book Slow: Life in a Tuscan Town (Welcome Books, 2009). “I was living in Italy and it became clear to me that people had a very specific relationship to food that was intertwined with other aspects of their lives,” Gayeton recalls—a connection to food rooted in culture and history.

“We’re a nation of immigrants. We don’t have that kind of relationship,” he says. So he created Slow to document and inspire others with what he discovered.

The Lexicon also grew out of the couple’s experiences with Laloo’s, the goat’s milk ice cream company that Howard-Gayeton founded in 2004. “Creating a food product with a very specific recipe—something that no one had tried before—was an amazing journey that gave us a window into how our food system works and how unaware most are about how food is made,” says Gayeton. “We realized that people weren’t making decisions based on knowledge. They were making bad food choices out of ignorance. If people really knew the terms and principles that defined sustainability, they would make better choices—choices that matched their values. We thought, ‘What if we created a lexicon?’”

Our agenda is to find the people who are the foremost practitioners of solutions and innovations. We focus on how we can convey those principles and ideas as best we can, to the widest audience possible.” Take the concept of traceability in fisheries, he says. “We start by asking, ‘How do we convey the challenge of that traceability? Then we find a guy in Hawaii from Norpac, the largest distributor of wild-caught fish in the US, and we get on a fishing boat with him.”

The very first practitioners to be featured were farmers from the Gayetons’ hometown, Petaluma, California, with images illuminating egg-packaging terms cage-free, free range and pasture raised. “These resulted in a PBS film that won a number of awards,” remarks Gayeton. “It had a very big impact across farmers’ markets.”

Next, they focused on heirloom and hybrid seeds. Then organic. “We worked with Warren Weber, who owns the oldest certified organic farm in California, for organic,” he says. And then people began to write to them, “people who were influential in their communities.” For the illustration of farm to table, Mark Retzlof, natural products industry icon, invited the Gayetons to Boulder, Colorado, to make images of the local food system (resulting in the poster my daughter spotted).

Now the Gayetons’ work features images from coast to coast and as far away as Hawaii and Alaska. A second wave of images collected in the book Local: The New Face of Food and Farming in America (HarperCollins) was just released in June. The new work showcases such food and farming luminaries as Alice Waters, Temple Grandin, Vandana Shiva and Joel Salatin.

“When we sit down to create an image, our focus is on conveying information,” explains Gayeton, which makes the approach different than for other art forms because it isn’t “just a pretty picture or something that will be primarily appreciated for aesthetic value.”

In Slow, Gayeton perfected the art of capturing multiple images, creating a collage, and inscribing the composite image with key words and descriptions that reveal more about the image. “I intuitively felt from the very beginning that the way to engage people around complex ideas is to give them something pleasing to look at and invite them to dig deeper, by engaging with text, to put things together on their own,” Gayeton continues. “A single photo is one moment fixed in time. I wanted to build the story over time,” he says. Often the images he creates will include individual photographs taken over one to five hours, “so that time and story can be represented in the piece.”

The words, too, are carefully chosen through a process honoring multiple perspectives. “People often say ‘a picture is worth a thousand words,’ but I think a picture is something that triggers a thousand questions: Why is that car in the picture? Why an orange dress? Why is that person holding something so tightly in his hand?” says Gayeton.

To draw out these questions, they share the raw images with groups for feedback. “Their curiosity leads to questions. Then we pose those questions to the people in the photos and etch the responses into the photo.” Creating a single image might take a month or more.

Because words are placed strategically around an image, the end result requires viewers to slow down, to piece it together at their own pace—a process that creates a sense of ownership and identification with the material, suggests Gayeton. “If I were to give you all the info on a piece of paper, you might read it but you wouldn’t retain the most important information. If you place it on an image, you create retention. People retain more because of the juxtaposition.”

One journalist described the images as a sort of “flat film,” relates Gayeton, “like watching a movie, piecing the images together, telling a story.” The most important thing about their work, says Gayeton, is that “it’s not some corporate idea or school textbook. It’s in the graphical language of young people. I have a seven-year-old. It’s kids who are going to make change.”

The Lexicon’s latest outreach effort is Project Localize, which takes the concepts and the methods of the Lexicon into schools. “We found that teachers were utilizing our images in classrooms,” says Howard-Gayeton.“We thought, ‘Wouldn’t it be great if kids could make these artworks themselves—document these concepts through their own eyes?’”

To test out the idea, they rolled out a pilot program in a school in Iowa last fall, “right in the middle of the Farm Belt,” she says. The students created maps of their local food system, interviewed producers, farmers, processors and key stakeholders at the local level, then used that information to create their own artworks. “We took some of that artwork to display in Washington, DC,” she recounts. This year, Project Localize will expand to twenty-five schools from Alaska to Florida.

For a movement to gain momentum, the Gayetons feel that broad accessibility is key. “We find a lot of ways to make the tent as big as possible,” says Howard-Gayeton. “We look at it from the standpoint of how do we get these to the largest audience?”

An ongoing way that many people connect with the Lexicon in person is through “pop-up shows” hosted in various locations across the country. “Anyone can apply to curate a pop-up show,” notes Gayeton. Every year, the Gayetons select a hundred individuals to receive artwork for five shows that they propose to produce around their community.

What’s next? Fresh ways to share the artwork are continuously emerging, replies Gayeton. “We’ve had people ask us, ‘Why don’t you do street art?’” In fact, some artists have worked with their local printers to paint the images onto buildings, and schools have decorated their walls with them, he says. How about translating into Spanish? “We’re all over that,” says Gayeton.

For a deeper dive into the Lexicon of Sustainability, visit www.lexiconofsustainability.com.

Douglas Gayeton’s books Slow: Life in a Tuscan Town and Local: The New Face of Food and Farming in America are available from the Organic Connections bookstore