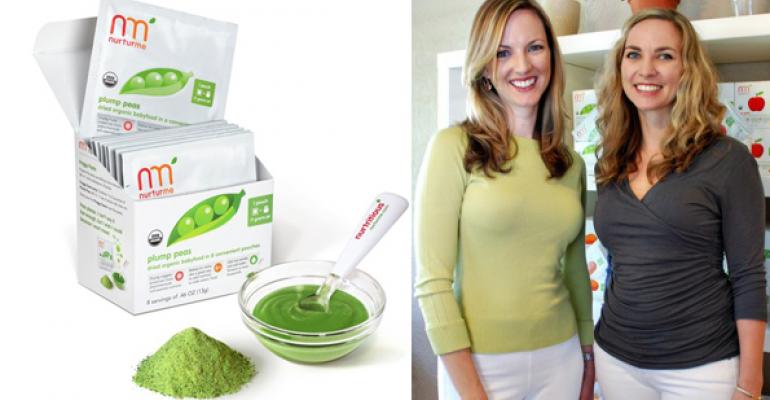 <p> NurturMe co-founders Caroline Freedman (left) and Lauren McCullough (right).</p>
Expectant mother Caroline Freedman looked at baby food packaged in thick glass containers and thought, &quot;There has to be a better way.&quot; So she and Lauren McCullough pioneered a line of dehydrated baby foods based on organic fruits and vegetables that offer convenience, flexibility and superior nutrition.

When Caroline Freedman was pregnant with her first child back in 2008, she wondered why there wasn’t a better, more updated way to feed her baby. “I realized very little had changed since I was a baby getting pureed nutrition in thick glass containers.” After sharing that notion with longtime friend Lauren McCullough over lunch in their hometown of Austin, Texas, the two came up with the idea for dehydrated baby foods.

Nearly two years later, NurturMe has gone national and is sold in huge chains like Babies “R” Us and online at Target.com. The founders expect to hit $1.5 million in revenue this year and expect to raise nearly $1 million in venture funding. They were also nominated for a Nexty at this year’s Natural Products Expo West.

newhope360: Why do you think your formula is so popular?

Caroline Freedman: Our product is not actually an infant formula. It’s dried organic fruits and veggies that can be reconstituted with liquid to create a baby food puree. We launched at Expo West 2011 as a baby food line, and over the course of the year learned that more than half of our customers were using the products as a supplemental ingredient in toddler foods like mac and cheese and yogurt, almost like the “Sneaky Chef” or “Deceptively Delicious” concepts.

So when we returned to Expo West this year with essentially the same product line, we relaunched it with the idea of “mixing it up” with liquid for infants and “mixing it in” to recipes for older eaters.  The product’s versatility has been a big hit with consumers who buy it for a range of eaters, from four months to four years old.

newhope360: When you decided that you wanted to do something new with baby food, how did the idea of dried food come to you?

CF: When I became a parent, around three and a half years ago, the concept for NurturMe was born. When researching baby foods at the time, jarred, pureed foods in bulky packaging just struck me as very old fashioned and impractical. Who wanted to lug around all those bulky jars?

In order to package them differently, the food’s consistency would have to change. I knew there were nutritional benefits to drying fruits and vegetables—you preserve more nutrients and phytochemicals than you do with heating and cooking methods—so I figured drying might be an interesting option. Not only would the food be more nutritious, but more compact and light-weight for moms on the go.

Then other benefits reveled themselves. Moms could mix it with breast milk or control the consistency of the foods they were preparing based on their child’s age. The idea kind of snowballed from there.

newhope360: Do you foresee a trend in the dried, organic market, or do you think it will remain specialized?

CF: As of now we’re the first and only company making baby food like this. In particular, the response from parents tells us that the concept of mixing fruits and veggies into other foods to give them a nutritional boost is a compelling one. It’s a fringe idea now, but we think it will become much more widespread and popular in the future, as parents not only get more and more health conscious, but also need more convenient, practical products that fit into their everyday lives.

newhope360: Where do you source your ingredients and how does the drying process work?

CF: Our foods are sourced from organic certified farms across the U.S., with one exception, our banana, which is grown in South America. Most of our flavors are drum dried, which involves a brief 30 to 60 second heating process and kill step before the foods are air dried and ground into powder form. Currently, our pea flavor is freeze dried then ground into powder form, as there is no cooking involved, so the pea is essentially raw. The fine powders, which resemble infant cereals when they come out of the paper-lined pouches they’re packaged in, mix easily with liquid and reconstitute into a smooth, pureed consistency.

newhope360: NurturMe was quite a hit at Expo West. What has that done for the company?

CF: At Expo West, we were accepted into a number of new retail chains, including Babies “R” Us, which took our brand to a national level. We also took on several new investors, including one who has since joined our board of directors.

newhope360: What does the future hold for NurturMe?

CF: More healthy products for modern parents sold across the nation and world!

The Nexty nominations were given out in support of NEXT: The Natural Products Industry Forecast 2013, a report produced by New Hope Natural Media’s Nutrition Business Journal and Sterling Rice-Group. Available this spring, NEXT provides a deep dive into the trends and market forces driving the natural products industry today and identifies the companies, products, people and ideas that will shape tomorrow’s natural products landscape. To learn more, go to www.nextforecast.com.

5 dos and don'ts natural product entrepreneurs can learn from the big guys
May 03, 2011