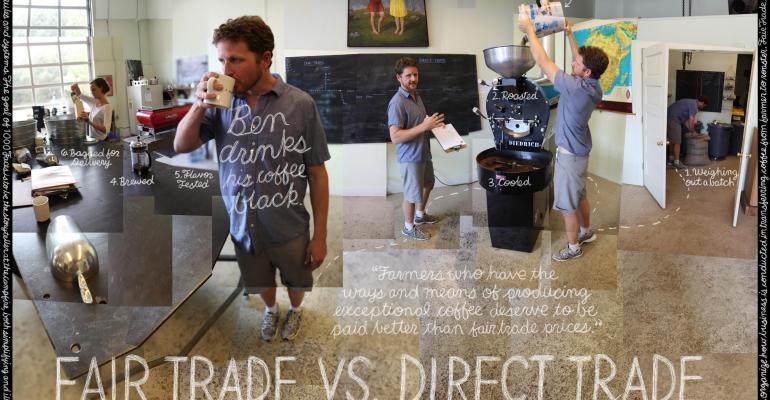 "Goods that are produced and purchased in a manner that demonstrates respect for the people who produce them as well as the environment. Goods should be purchased through transparent relationships that are built on trust and openness, and producers should be compensated at a level that reflects the value of their hard work and that provides a living income for themselves and their families."

—Andrew Feldman, As Green as it Gets

What's the difference between fair trade and direct trade? What does it take for foods to receive these certifications (and what do they really mean, anyway)?

Labels are confusing, especially when they sound similar, but fair trade and direct trade are two distinct concepts.

Fair trade is an impersonal approach to food producer relationships; it creates standards and rules to improve the lives of growers and producers by paying them an above commodity market “fair trade” price. Direct trade, on the other hand, is a more personal approach. In terms of coffee production, it creates a transparency between the two major producers in the coffee chain—roaster and farmer—and provides price incentives for farmers able to produce higher quality coffee.

Ben Myers, a Roaster at 1000 Faces Coffee in Athens, GA, believes both fair trade and direct trade have purpose and place in the gigantic world of global coffee trade. The two terms make special reference to systems which organize how business is conducted in transferring coffee from farmer to roaster. The goal of 1000 Faces is to be the storyteller at the campfire, both simplifying and illuminating the story of coffee.

Short film: "Fair Trade vs. Direct Trade" by The Lexicon of Sustainability

All is fair (trade) in love and chocolate

Robin Madel writes of her personal hunt for socially responsible and delicious chocolate. As an enthusiastic chocolate lover, Robin reflects:

"Beyond the ecosystem impacts of industrial chocolate production, human rights violations such as child labor abuse associated with most cocoa farms are common and unfortunate. When I buy chocolate, I’m supporting a whole system of politics and people behind that chocolate. I want part of the pleasure I derive from eating chocolate to be the knowledge that I’m not adding to someone else’s abuse."

Learn more about fair trade chocolate and get the scores from Robin’s chocolate tasting here!