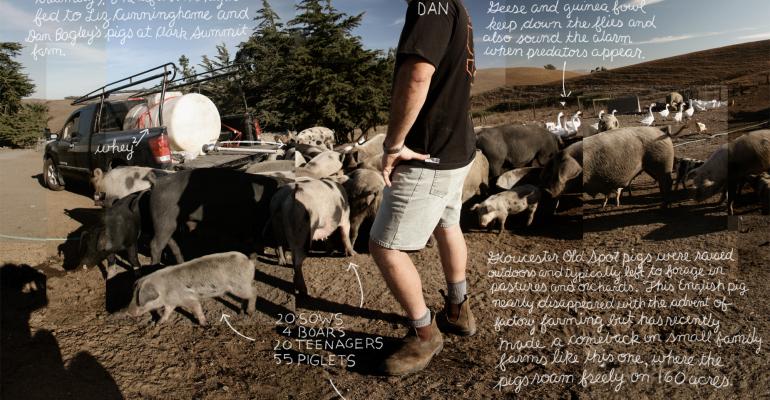 Humane Treatment: Animals have always played an important role in agriculture. Not only do they provide us with food and fiber, but they also help to recycle nutrients and add to soil fertility. Over recent decades, however, the farming of animals has become increasingly separated from its natural existence on the land. Today, most farm animals in the United States are raised in confinement on huge industrialized systems that are more like factories than farms.

The Animal Welfare Approved (AWA) certification identifies farms that treat their animals, from birth through death, with the highest animal welfare and environmental standards. The three main requirements are that (1) animals have a pasture or range, (2) the farm must be independently owned, and (3) the death of the animal must be humane.

So what's the connection between animal welfare and sustainability? One consequence of factory farming has been the disappearance of domestic animals that are capable of adapting to local environments. These animals are collectively referred to as heritage breeds.

The Clark Summit Farm has been in Liz Cunninghame’s family since 1916. Her grandfather had thousands of laying hens, 30 jersey cows, pigs and turkeys. Gloucester Old Spot pigs were raised outdoors and typically left to forage in pastures and orchards.

These heritage breed English pigs, known as Gloucester Old Spots, nearly disappeared with the advent of factory farming but have recently made a comeback on small family farms like this one, where the pigs roam freely on 160 acres.

In this episode, The Perennial Plate introduces us to Carlo Pavesi, one of the men behind some of the best prosciutto in the Parma region: La Corte dei Neri. Carlo shows us his pigs and shares with us his deep love of his animals.

If factory farming is ever going to become an exception instead of a standard, choosing ethically-sourced and humanely raised meat is essential. Select sustainable beef to make this Asian-influenced salad by Chef Ann Cooper, "The Renegade Lunch Lady."

Were you previously aware of the Animal Welfare Approved (AWA) certification? How much of a role does humane treatment of animals play in your food choices? Let us know in the comments below, and follow us for more on humane treatment throughout the week.