HomeHealth and Nutrition ResearchWatchword: Watersheds
Recent
Latest
Sponsored Content
Exploring the CBD gummy revolution – article
Moonshot Snacks at the forefront of eco-friendly food innovation
May 13, 2022
Monitor: Consumer research on collagen shows how much education is needed
May 12, 2022
Chilean retail group acquires majority stake in The Fresh Market
May 12, 2022
Trending
Debra Stark’s light shines bright on natural products industry
May 10, 2022
Hemp CBD industry struggles so far in 2022
May 10, 2022
Natural beauty market trends
Jun 16, 2021
Getting ready for 2023: Trends for brands to consider
Apr 12, 2022
Lexicon of Sustainability
brought to you by 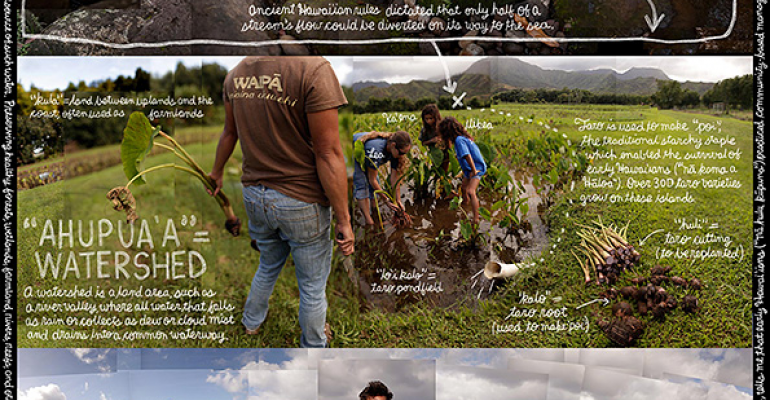 Watersheds: A watershed is the total landmass area determined from a major river or waterway traced back to its point of origin. “At the most basic level, a watershed encompasses all the land surface that collects and drains water down to a single exit point," explains water expert Brock Dolman. "The continual cycle of erosive water flowing over uplifting and weathering land has sculpted all landscapes into distinct cradle-like entities known as watersheds, basins, drainages, or catchments. Everyone on the planet lives in a watershed somewhere.”

Protecting and restoring our watersheds

There’s a huge amount of pressure on the natural resources of our planet, especially as populations grow and gravitate towards urban centers. Over half of the global population lives in cities and for this reason, cities are at the center of the global challenge to protect and preserve watersheds. When it comes to water infrastructure in cities, we often think “grey”: grey pipes, grey steel, grey water, grey waste treatment.

As Kurt Pelzer and Laura Tam of SPUR find, “[Grey infrastructure] is no longer the only tool in the toolbox. Green infrastructure systems harness natural processes, and extend beyond steward and flood control to include carbon sequestration, recreational amenities, habitat creation, and beautification.”

Sink it, Slow it, Reuse it, Move it: these are the four green stormwater management tools outlined by the San Francisco Urban Watershed Plan and described by SPUR with examples from all over the world. Read more about the 8 Shades of Green Infrastructure.

“Ahupua’a” means watershed. A watershed is a land area, such as a river valley, where all water that falls as rain, collects as dew, or falls as cloud mist, drains into a common waterway. Native Hawai’ians’ “ahupua’a” were sustainable communities that originated in the interdependence between the land and the people. The boundaries of these communities were established along watershed lines. Abundant and clean water was the most valuable resources, and a healthy native forest was the source of such water. Preserving healthy forests, wetlands, farmland, rivers, reefs and other resources also preserved their very way of life.

Video: "Water" by Know Your Food

Agriculture depends on water, but in many parts of the world water is a scarce resource. Effectively managing watersheds helps farmers both preserve their farms while also protecting the environment, while new technologies like drip irrigation help conserve water by putting small amounts precisely where it’s needed, which greatly reduces water waste.

How do you strive to conserve water in your day-to-day life?