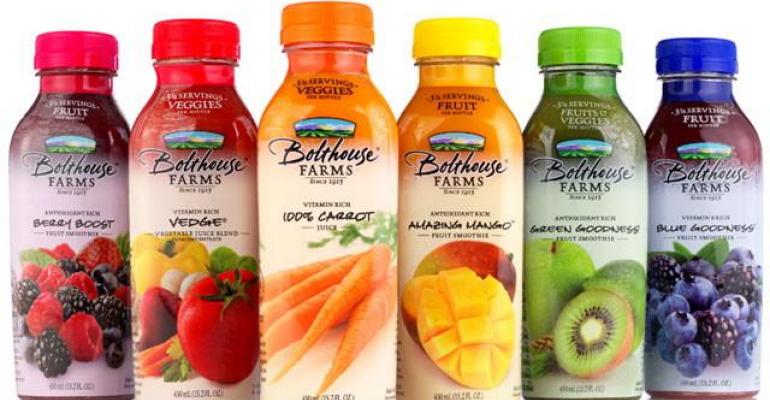 After a quarter of shrinking soup sales, Campbell&#39;s latches on to the high-growth sector of functional juice by acquiring Bolthouse Farms.

Rising commodity prices and diminishing consumer interest have depressed the acquirer’s soup sales for the past year. Campbell’s reported in May that third-quarter profits had declined about 5 percent.

With the Bolthouse acquisition, Campbell’s appears to be shoring up its stakes in functional beverages, where it already plays with the legacy V8 brand of vegetable drinks. Bolthouse offers lines of 100% fruit & vegetable juices, as well as vitamin-fortified smoothies and protein drinks.

A soup to juice strategy

As the data susses out, Campbell’s picked the right product category to help reinvigorate shrinking sales. According to Nutrition Business Journal estimates, U.S. sales of functional beverages grew 10 percent to $25.3 billion in 2011, outpacing every other functional food category, as well as total beverage sales. Much of this growth comes from the outstandingly popular energy drink category, though sales of functional refrigerated & fresh juice were likewise robust.

Bolthouse is a strong mass brand and, though not natural or organic, it plays in the natural channel as well.

The Bolthouse family of farms, based in Bakersfield, Calif., has been a major supplier of fresh vegetables to consumer packaged goods companies for nearly a century. Bolthouse began packaging baby carrots in the '90s, and runs the “Eat ‘Em Like Junk Food” campaign to get more people into snacking on vegetables.

The company was also a first mover in the açaí game, and has an açaí processing and distribution facility located in Brazil.