HomeNewsMessage from historic Paris climate summit: Organic food and farming can save the planet
Recent
Latest
Sponsored Content
How brands can get their trade spend under control – article
Sponsored Content
Going organic lifts everyone up – video
6 natural brands partner with UNSTUCK on new product line to aid refugees
Jun 23, 2022
Sponsored Content
The power of organic messaging – download
Trending
Unboxed: 7 clean collagen powders with a twist
Jun 21, 2022
Getting ready for 2023: Trends for brands to consider
May 17, 2022
12 brands marketing positivity, kindness and joy
Jun 17, 2022
Coca-Cola axes Honest Tea, but its founders are just getting started
Jun 07, 2022
IdeaXchange
brought to you by

Message from historic Paris climate summit: Organic food and farming can save the planet 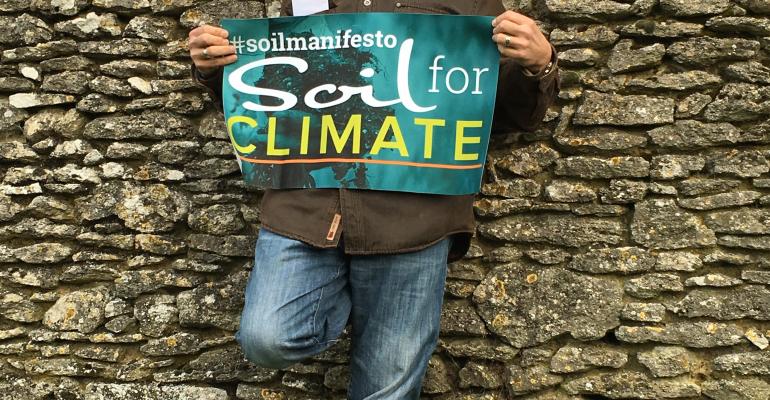 25 nations and 50-plus international organizations joined France&rsquo;s &ldquo;4 per 1000&rdquo; Initiative, a major global agreement to promote healthy soils and regenerative agriculture as a solution for food and climate security.

With coastal areas, island nations and poorer developing countries poised to bear the brunt of global warming, organic, regenerative agriculture was acknowledged for the first time at the COP21 global climate summit as a central solution for drawing down carbon and reversing climate change.

Amidst the historic COP21 climate accord, signed on Dec. 12 by 196 countries, also of import was the fact that 25 nations, plus more than 50 international organizations, private foundations, international funds, and consumer and farmer organizations, joined France’s pioneering “4 per 1000” Initiative, officially launched at the COP21 summit as a major global agreement to promote healthy soils and regenerative agriculture as a vital solution for food and climate security.

“This is a game changer because soil carbon is now central to how the world manages climate change,” said Andre Leu, president of IFOAM Organics International, the world’s leading organic farmers and producers association, based in Bonn, Germany. “I am stunned. After all the years of advocating for this at UN Climate Change meetings and being the lone voice in the wilderness, it has taken off so quickly and now is global with numerous countries and key institutions supporting it. However this is true of all tipping points,” he added.

“We now go from trying to convince people about the multifunctional benefits of soil carbon sequestration to developing projects to implement it,” said Leu, who was in Paris to represent IFOAM and also as a steering committee member of Regeneration International, an international nonprofit organization with a mission to advance organic, regenerative agriculture as a practical, low-cost solution to drawing down carbon and reversing climate change.

“Everything is at stake…we have an alternative”

Visible throughout the COP21 climate summit was world renowned author and “rock star” agro-ecologist Vandana Shiva, promoting the connections between food and agriculture, climate change, and economic and social justice. Engaging media, government officials, NGOs and audiences throughout the Paris climate summit, Shiva’s messages were the same: “We don’t have much time,” and “fossil agriculture is the problem; organic agriculture is the solution.”

Speaking at an exhibition at Le Bourget, site of the official UN climate summit in Paris, Shiva said: “Everything is at stake now, and within the next 20 years, either we can shift and walk off the precipice where we stand and build a world that is livable, or walk over that precipice. It’s a human choice that we face."

We have an alternative. The alternative is seed sovereignty in farmers’ hands, and more biodiversity. Ecological agriculture can feed two times the population of the world; it can rebuild soil fertility; it reverses desertification; it can take out the stocks of carbon from the atmosphere and put it into the soil; and most importantly, it overcomes the human crisis of refugee creation and displacement which is at the root of so much of the conflicts and violence today.

So, organic farming offers an answer to sustainability, justice, peace, food security and climate security. And more industrial farming, more corporate control will worsen every crisis. The success of Paris will be for humanity to make peace with the earth and make peace with each other, because otherwise, humanity will have no chance for the future."

Carbon neutral is not enough

According to Leu, a successful organic farmer in his own right with a tropical fruit tree farm in Australia, “The global conversation changed in Paris to more than emissions and fossils fuels. Just

stopping fossil fuels and moving to renewables will not stop climate change,” he emphasized.

“The current CO2 level in the atmosphere is 400ppm,” Leu explained. “To achieve the less than 1.5 degrees Celsius temperature rise targeted at COP21, the level needs to be less than 300 ppm. Just stopping emissions means that we will go into severe climate change because of the cumulative effect of these gases over the next 200 years. We also have to draw down the excess 120 ppm CO2 out of the atmosphere.”

According to Leu, “The Paris Accord gives us the mechanisms to reverse climate change through the flexibility of the INDCs (Intended Nationally Determined Contributions, or individual country climate actions outlined under international agreement). The real work starts now with developing INDCs that not only stop emissions, but also draw them out of the atmosphere. The French have shown incredible leadership in this with the ‘4 per 1000’ initiative. This is a truly historic moment for our planet,” he said.

Transitioning from an extractive, fossil fuel-intensive energy system to a clean, renewable alternative is vital to any global strategy to mitigate climate change, but reducing emissions solves only half the problem, wrote Ronnie Cummins and Katherine Paul, founding steering committee members of Regeneration International, in a Dec. 10 commentary published by the Organic Consumers Association. “We also have to draw down the billions of tons of CO2 currently heating up the atmosphere. Unless we address the climate change elephant in the room—Big Ag—we will fail to solve the climate crisis.”

According to Ratan Lal, director of Ohio State University’s Carbon Management and Sequestration Center, the world’s cultivated soils have lost 50 to 70 percent of their original carbon stocks and fertility over the past 100-plus years of commercial agriculture. Modern chemical-intensive, factory farm, GMO-based industrial agriculture is largely responsible for that loss, Cummins and Paul assert.

“The French Initiative is the most direct, most practical and only shovel-ready plan for reversing climate change,” they wrote. “We don’t need, and don’t have time to wait for expensive, unproven techno-fixes Ã  la Bill Gates, some of which haven’t even made it to the prototype stage, and many of which could come with unintended consequences. We don’t need a corporate-focused ‘climate-smart agriculture’ scheme that promotes business as usual. And we definitely shouldn’t put our faith in Monsanto’s ‘carbon-neutral’ but ‘poison-positive’ plan.”

Pointing to the fact that the U.S. has yet to sign on to the 4 per 1000 Initiative, Organic Consumers Association, IFOAM and dozens of international non-governmental organizations (NGOs) are encouraging U.S. citizens to urge President Obama to pledge U.S. support. “If we’re going to subsidize any form of agriculture, it should be the regenerative, truly climate-friendly, health-friendly, farmer-friendly type,” Cummins and Paul suggested.

Seeking to foster coordinated communications and shared tactics among the diverse organizations, NGOs, businesses and others descending on Paris, the team at Regeneration International – comprising a small, tech-savvy crew of young people and an international board of food, agriculture and climate experts, including Vandana Shiva and World Food Prize winner Hans Herren – sponsored more than 60 delegates from organizations based throughout the world to attend COP21 and participate in workshops, tours, planning sessions and related events.

Many delegates stayed in the same lodging, sharing meals, ideas, resources and conversation throughout the two-week Paris COP21-related event schedule.

“We were very excited to be among the delegates to Regeneration International at COP21 to participate in planning and strategizing how we’re going to mobilize the grassroots,” said Cindy Eiritz, strategic development manager for Healthy Soils Australia. “Together, we can stop soils from being net emitters to being net sequesterers of carbon, which will make a big difference.”

Working with rural communities in northern Zimbabwe, holistic management educator and regenerative rancher Precious Phiri showed audiences in Paris how it can be done. By implementing grazing management concepts promoted by such groups as the Savory Institute, her ranching techniques were able to bring back a diverse ecosystem and healthy grasslands, improve soil organic matter and sequester carbon – and restore water tables enough where ponds returned and elephants gathered to drink water where none had been before.

“For me, COP21 has been, with Regeneration International, a gathering of people who are determined and want to do something to reverse climate change, sequester carbon and heal soils across the world,” Phiri said in a video conversation with Savory Institute’s Chris

Kerston. “It’s been a pool of exchanging ideas and taking action. Speaking of how soils can be a solution to climate change. They are alive – they are the biggest carbon sink; the biggest cooler of the earth, if well managed. It’s where we need to be.”