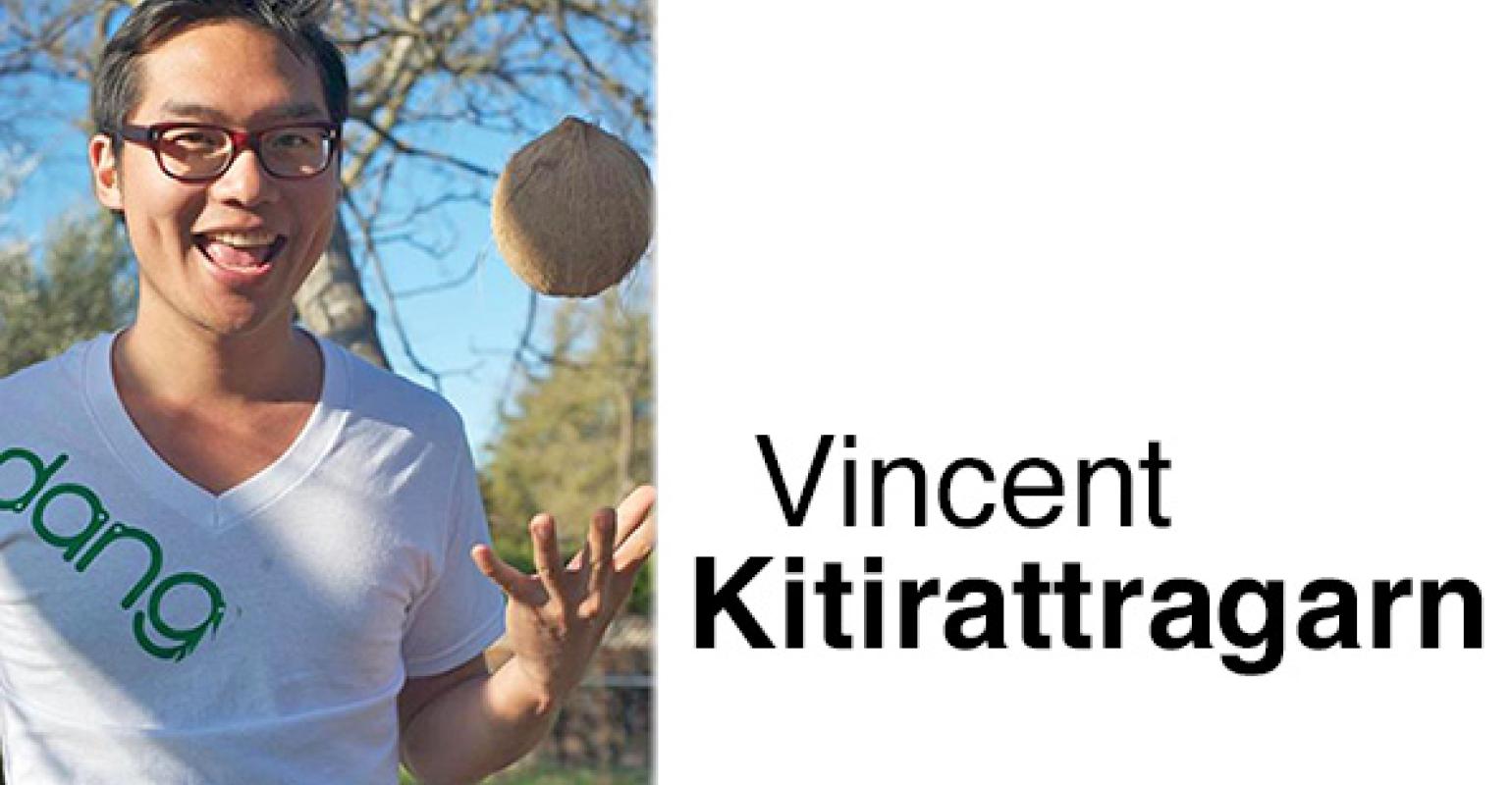 At Natural Products Expo East, I was one of three finalists in the Pitch Slam. How to stand out from the others? I crafted my entire pitch into rhyming couplets.

Natural Products Expo East is a feast of new ideas and innovation. As part of the 2014 Pitch Slam representing Dang Foods, how was I going to stand out from the admittedly impressive other two contestants in just five minutes, while communicating real data and a business plan? Here's how: by reciting my pitch in rhyming couplets packed with information.

Although Dang Foods didn't win the final award, I can guarantee the pitch itself was memorable. Here it is.

Now this is a story all about how

I grew a company up from the ground.

The name is Dang, after my Mom.

One day she gave me a recipe – it was the bomb:

Take a coconut, then you slice out the meat,

Season it up, then apply some heat.

What you have left is a coconut chip,

That’s a coconut chip? it looks like shaved wood,

Taste it for yourself and you’ll say Dang, that’s good!

A coconut is a seed, a nut and a fruit,

Coconut water and oil sales are going through the roof,

Chips are next in line and that’s the truth.

These forces have led us to grow really fast,

‘Cause we’re early to market, and not the last.

All this is nice, but what’s the bottom line?

We’ve got five flavors, some Fair Trade and non-GMO,

Because we care about the places our coconuts grow.

Vegans love us, so do the gluten-free,

We’ve got fiber and you can put us on salads and ice cream.

Many say they’re addicted, which we don’t mind,

They’re in good company, including The New York Times.

Speaking of the Times, what’s up with the press?

“Dang Coconut Chips” have been featured by the best.

This past summer we got a Sofi for best snack

Our social media reach is up at 15 grand,

Now what does this mean for distribution and sales?

Since we’re out in the West, natural channel was the best,

Then we started moving across the U.S.

The other upscale grocers and Food Lion – the whole pride.

Next year, we’ll focus on bringing it to the club

Foodservice and ecommerce will be growth drivers

To bring our sales even higher and higher.

Publix and Wegmans are in our sights

And I think you’ll agree that the future’s real bright.

In the coconut chip market, we’re clearly on top

Three-quarters market share and no signs of a stop.

And for those who want to know how we do on the shelf,

Our turns are faster than a record; the numbers speak for itself.

Now what does this mean in terms of the green?

How will we grow and are we a lean team?

This year we’re heading to 4 and a half mil,

Our growth will come with new products and stores,

Line extensions and new items to please our core.

Because we’re a small team with low overhead and no trucks.

To sum it all up, we’ve been profitable from year one,

We’re in it to win it, and have some fun.

My brother and I are the right team to lead Dang

Our team is small but the talent is there

To take on competitors like Go Raw and Bare.

We’ll continue with Fair Trade and other certifications

We’re new to the industry and need your help

To get to the next level and expand on the shelf.

As a young team we rely on our friends

Being at Expo is the key to our success

As well as learning from the industry’s best.

I’ve shown many numbers but this is the last

Because my 5 minutes are up, boy was that fast.

The number zero, is nice, round and small

It’s the number of accounts that have dropped us at all.

Now what is the main takeaway

From everything I’ve had to say?

It’s that Dang is on top, and we’ll keep it that way.

What's the most memorable startup pitch you've heard, and why?