HomeNewsYou can run, but you can’t hide: What to do when a state attorney general comes calling
Recent
Latest
4 tips to get ahead of chemical concerns in packaging
May 20, 2022
7 CBD favorites in the increasingly popular gummies format
May 20, 2022
Mission MightyMe helps parents introduce allergens to babies
May 20, 2022
UNFI's Eric Dorne to step down as chief operating officer
May 20, 2022
Trending
Whole Foods' honors 30 companies with 10th annual Supplier Awards
May 18, 2022
Getting ready for 2023: Trends for brands to consider
May 17, 2022
Sponsored Content
The rise of sustainable business – eGuide
Sponsored Content
Natural beauty market trends
Jun 16, 2021
IdeaXchange
brought to you by

You can run, but you can’t hide: What to do when a state attorney general comes calling 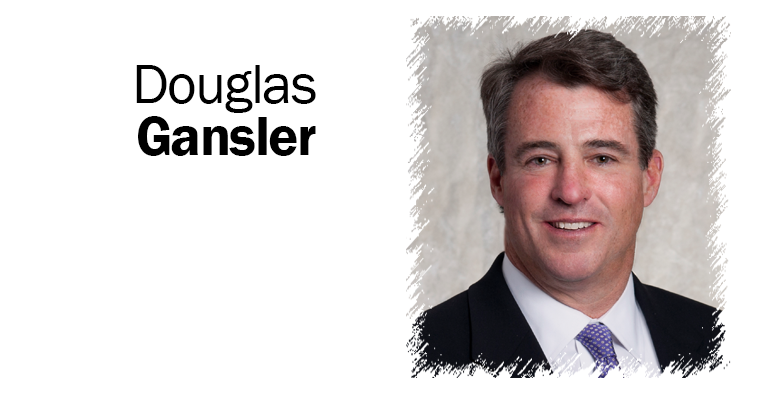 A former state AG explains what triggers investigations and how supplement companies can avoid getting caught in them.

The dietary supplements industry has grown tremendously over the past few decades. More than half of all adults in the United States now take dietary supplements, and the industry generates more than $37 billion in annual sales. While that growth has been a boon for consumers and businesses alike, it has also caught the eye of state regulators. Add in the fact that the supplements industry is a consumer-centric industry, and it should not come as a surprise that the consumer protection divisions in state attorneys general offices have taken notice.

Many state attorneys general believe that the supplements industry is not well-regulated by the federal government. Furthermore, even among those who do understand that there are federal regulations, they tend to view those federal requirements as a floor and not a ceiling. Thus, state attorneys general may have your company on their radar even if it is fully complying with all federal Current Good Manufacturing Practices and it has never received a complaint from the Food and Drug Administration or the Federal Trade Commission. This dynamic makes state attorney general investigations a significant risk for the industry.

The gravity of this risk burst into full view in February 2015, when New York Attorney General Eric T. Schneiderman issued cease-and-desist orders to four prominent supplements retailers: Walgreens, Walmart, General Nutrition Centers and Target. Schneiderman announced his allegations at a packed press conference, claiming that DNA barcode testing had revealed that most of the supplement products sold by the retailers did not contain the advertised ingredients. He also alleged that his testing had found that the products contained many substances not listed on the label, including known allergens.

The reputational damage to the supplements industry was done the moment Schneiderman finished the press conference. Press reports of Schneiderman’s allegations made the front pages, and GNC’s stock dropped by as much as 5 percent during the day. What was not reported as widely was the industry perspective that Schneiderman had used the wrong tests for what he was trying to show.  DNA barcode testing does not work for processed products, because DNA is too easily damaged during processing to be identified by a test. As the FDA later acknowledged in a March 2015 letter to Senators Martin Heinrich and Orrin Hatch, the agency does not use “DNA-sequencing-based identification methods for botanical materials.” Schneiderman’s office instead should have verified the product ingredients with a more appropriate test for plant extracts, such as liquid chromatography or mass spectrometry. GNC ended up settling the allegations against it without an admission of wrongdoing, but the allegations against the three other retailers are still outstanding.

What authority do state attorneys general have to launch investigations into the supplements industry?

As the New York DNA barcode testing investigation showed, state attorneys general have demonstrated that they can and will target the supplements industry, even in the absence of identifiable consumer harm.

But, considering that federal regulators are already monitoring the supplements industry, what gives a state attorney general the authority to launch an investigation in the first place? State attorneys general derive their authority to regulate the supplements industry primarily from their state’s laws against unfair and deceptive acts and practices (the “UDAP” statutes), as well as each state’s Consumer Protection Act. State UDAP statutes prohibit unfair or deceptive acts and practices in consumer transactions. This somewhat nebulous and subjective standard allows for wide-ranging interpretations of what is unfair or deceptive, and state regulators often enforce this standard far more aggressively than the FTC enforces the analogous federal UDAP law. Your company should absolutely not assume that compliance with the federal UDAP law is sufficient to ensure compliance with all state UDAP statutes.

In determining whether the sale of a supplement may violate a state UDAP statute, state attorneys general will often ask the following three questions:

Although the FDA and FTC are well qualified to take on these kinds of questions, state attorneys general can often do so more quickly, effectively and efficiently. State attorneys general are highly motivated to protect consumers and to do so visibly, as they are elected by popular vote in 43 states. For this reason, state attorneys general frequently have the incentive to go after the smaller actors in the supplements industry that may not be as much of a priority for federal regulators.

In addition, state attorneys general can pool their resources to effectively and efficiently conduct large-scale investigations. For example, the attorneys general from New York, Connecticut, Indiana and Puerto Rico have formed a bipartisan coalition to investigate the supplements industry.

Will your company become the target of an attorney general investigation?

So we know that state attorneys general have the supplements industry in their crosshairs, but how can we tell which companies within the industry are going to become targets? The answer will most likely come from consumers. A consumer complaint is the most likely trigger of a state attorney general investigation. Consumers will often file complaints about a product with their state’s consumer protection division. If several complaints about a supplement come in and seem to form a pattern, the attorney general’s office will likely open an inquiry into the practices of the company responsible for that supplement. The attorney general may even then broaden the investigation to reach the practices of companies that make similar supplements.

Hear more on the state of the supplement industry at the NBJ Summit.
June 13-16
Dana Point, CA
Learn more here.

An unfavorable story in the press is the second most common way for a company to become the target of a state Attorney General investigation. This avenue for becoming a target dovetails with the consumer complaints path in that a story about a consumer complaint is not likely to generate press coverage unless it indicates a broader pattern of complaints. Sometimes a news story can generate an attorney general investigation because, if a reporter asks the attorney general’s office what is being done about the issue in the news story, the attorney general will rarely want to respond, “nothing.”

So how can your company avoid becoming the target of an attorney general investigation?

The easiest way to minimize your company’s chances of becoming an investigatory target is to reduce and resolve consumer complaints about your company’s products. If you make a quality product and you do not give consumers unreasonable expectations about the product by making misleading claims when advertising it, your customers will likely not file complaints. But when you do get a complaint, you need to take it seriously, even if you think the complaint has no merit.  Chances are that other customers have the same complaint as the one that contacted you, and, if customers feel that your company is not doing anything to address their complaints, it is only a matter of time before someone will bring it to the state consumer protection division. Thus, you need to work with your customers to resolve any complaints that they may have.

Second, you should review your product claims with an eye toward ensuring that they are not misleading. Whether a product label is confusing or misleading is a judgment call, but if you think your claim might be a stretch, your state regulator will definitely think it is a stretch. You should be able to substantiate the claims that you make so that, when a state attorney general calls and asks you about a product claim, you are able to back your claim up with competent and reliable scientific evidence.

It's too late! My company has already received a letter from a state attorney general. What do I do now? 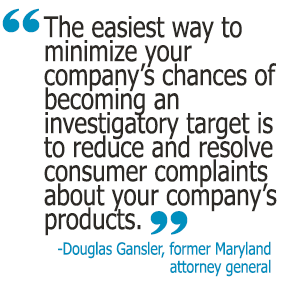 strong relationship with the specific attorney (or attorneys) general who issued the inquiry. Often, a former state attorney general will be best positioned to navigate the legal process with the office of a current state attorney general. The lawyer who helped your company negotiate a commercial lease for your office space or who defended a recent class action most likely does not have the skill set or the connections to ensure that your company is put in the most favorable light possible during the course of the attorney general’s investigation. You should also consider whether to let your industry association know about an inquiry from a state attorney general. Other companies may be receiving the same types of inquiries, and your industry association may already be coordinating a response.

Although a letter from an attorney general may provoke your fight or flight instincts, you should not immediately put on litigation battle gear. Litigation will likely cost your company a small fortune in legal fees, even if you prevail. Instead, through your lawyer, you should open up lines of communication with the attorney general’s office to find out what they are really interested in. In doing so, you may discover that the attorney general is only concerned about one small item that your company can easily address, with some possibility that by addressing it you can make the rest of the investigation go away.