Ayurveda gains ground in US market on strength of specific herbs

Turmeric, boswellia &amp; ashwaganda open the doors for growth in Ayurveda, but sustainability issues and a lack of practitioner licensure could be future barriers.

Ayurveda’s comprehensive approach to physical, mental, emotional and spiritual well-being has formed the foundation of the Indian medical system for thousands of years. Now, this lifestyle—whose name literally means “the science of life”—is finally making inroads in the West. But how far down those roads are American consumers prepared to wander?

It’s hard to say, but as of 2007, at least 200,000 U.S. adults had used Ayurvedic medicine in the previous year, according to the National Center for Complementary and Alternative Medicine. That number is miniscule compared with those who had used acupuncture (3.1 million adults) or chiropractic (18 million)—but the numbers have likely mushroomed since then.

“Yoga has been hugely popular, and as the yoga market continues to mature and add depth, people are beginning to discover Ayurveda as a sister science of yoga,” says Kevin Casey, co-founder and chief marketing officer at Albuquerque-based Banyan Botanicals. The yoga revolution has sparked a desire for a more natural healthcare process that addresses the whole person, agrees Gunny Sodhi, operations and marketing director at Ayush Herbs in Redmond, Washington. “We’ve seen that consciousness-raising translate into sales of supplements,” he adds.

Myriad supplement companies have emerged in the retail space in recent years, including up-and-comers such as Veria, Mahima for Life Essentials, Savesta Lifesciences, and Maharishi Ayurveda. 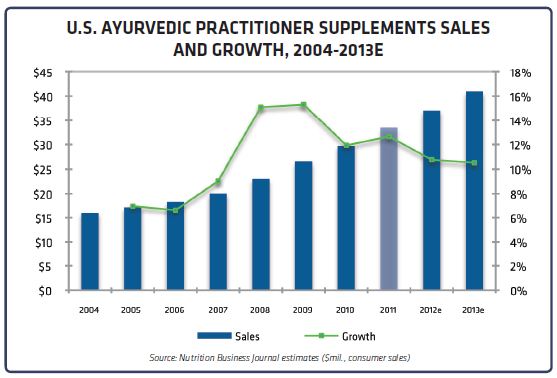 The number of Ayurvedic practitioners is also growing. “No one can say for sure” how many there are, says Dr. Marc Halpern, founder of the California College of Ayurveda, and the author of Healing Your Life: Lessons on the Path of Ayurveda. But the number of practitioners who have graduated from a U.S. school is approaching 2,000, he says, and many more have taken short courses.

That doesn’t mean Ayurveda is an easy sell. “To really comprehend Ayurveda is a challenge,” says Michele Sondheimer, general manager at Boulder-based Organic India. “Not only do you have to learn about the whole philosophy itself, but it’s also like learning a whole new language.” And, she says, most American consumers don’t want to take the time to do that. “We go to the Yoga Journal conference every year. That’s a pretty primed marketplace and, even there, getting people to take the time to learn about it—unless they’re having an individual consultation or have previous knowledge—they’re really not that interested in having long lectures about it.”

But perhaps that’s not necessary. Halpern says that once consumers understand the basic premise of Ayurveda, the system is fairly intuitive. “Ayurveda is 99% common sense. For instance, who can disagree with the principle that ‘We all have unique physiology and, as a result, the foods we consume and the lifestyle we lead should also be unique’? Ayurveda is a path for understanding what is right for you.”

And when consumers do want to take a deep dive into the system, plenty of companies stand by, ready to demystify it. “There’s a huge spectrum of where people are on their path of greater self-awareness and well being,” says Casey. “If they just want some herbs to take for a specific ailment, then we have that, and Ayurveda totally works on that level. If they’re willing to dig a little deeper, we like to be there and offer that next step.”

There’s no question, though, that for most Americans, herbal supplements are the gateway into Ayurveda. “Turmeric is an Indian herb—its popularity is growing hugely because it’s being researched for so many applications,” Sondheimer says. “But is that Ayurvedic? I wouldn’t say so. Would it be an entrée into Ayurvedic principles? Maybe.”

Turmeric, in fact, is performing solidly in sales. According to NBJ estimates, turmeric supplements grew 22% in 2011 to reach U.S. sales of $80 million. Other Ayurvedic herbs are doing even better. According to market research firm SPINS, boswellia has exploded in the conventional channel, with a 152.6% increase, and a not-too-shabby 56.6% gain in the natural channel, during the 52 weeks that ended September 1, 2012. And ashwaganda is up 48.8% in naturals and 10.8% in conventional.

These retail gains correspond to equally robust growth in the practitioner channel. According to NBJ, sales of supplements through Ayurvedic practitioners grew 13% to $30 million in 2011, with sales growth of 11% projected for 2012. It’s still early in the game for this market, but it’s picking up steam as word spreads about specific herbs.

“Ashwaganda is slowly but surely becoming more widely known,” Sondheimer says. “It has a lot of applications,” including joint health, a big concern among baby boomers. Surprisingly, it outsells the company’s herbal formulas that have structure/function claims, like flexibility, she says. “We thought they would do better because they’re pretty descriptive in what they’re utilized for. But our top sellers are still the ones called by their Indian names.”

The so-called brahmi herbs (bacopa and gotu kola), as well as tulsi and arjuna are strong sellers at Organic India and Ayush. “For us, it’s our formulations that are more popular,” Casey says, noting that Banyan’s best-selling product is triphala, a traditional combination of three herbs.

But, he says, it’s not so much a matter of single herbs versus blends as how they’re marketed. Banyan’s website allows consumers to shop by category, by dosha (individual constitution) or by health topic. “People still like to shop by health condition,” Casey says. “It’s still the most popular entry point.” Likewise, Sondheimer says that Organic India’s products do best at retail when they’re sold in the structure/function sets rather than in a separate Ayurveda section. “They’re not popular enough to be browsed as commonly as people going to, say, the digestion section or the headache section. I think companies are getting much more mileage on their sales by having their products included in those particular sets.”

The biggest consumers of Ayurvedic products, regardless of how they’re sold, are women. “Women are more receptive. They’re doing more research,” says Sodhi. “I’d say 80% of our customers on the retail side are women.” (Ayush also sells a professional line to health practitioners.) Casey nails the demographic down to “college-educated women who are between 35 and 55.” But Shaheen Majeed, marketing director at Sabinsa Corp., says baby boomers are also showing interest. “With increasing lifestyle disease, people are looking [for] safe means to regain health and live longer. Many are turning to Ayurveda.”

Majeed also says that much of what’s driving consumer acceptance of Ayurvedic herbs is science. “Increasing evidence from clinical studies has provided much support for Ayurvedic herbs in dietary supplements today.” For example, he says, “Turmeric extract has done very well, largely because of the successful clinical trials using curcumin obtained from turmeric extract for conditions such as Alzheimer’s disease, various cancers, inflammation, blood triglycerides in obese patients, arthritis, etc. The medical community is really taking notice, which is spreading to consumers.” Because consumers do respond so strongly to clinical evidence, he says, “We predict that in the future, guggul gum extract will gain attention, assuming availability of the material can be assured.” Guggul has recently shown promise in clinical trials against cancer proliferation and heart disease.

But Majeed brings up an important issue. “It is important for the industry to acknowledge that natural resources are limited, and proper and planned cultivation of these herbs may help to create sustainability of these materials.”

Banyan’s Casey agrees. “We see sustainability as a critical issue. Ninety percent of the herbs used in Ayurveda in India are wild harvested. As Ayurveda continues to increase in popularity around the world, it’s definitely an issue and it’s affecting quite a number of herbs.” Both Sabinsa and Banyan have cultivation programs to assure regular supply of Ayurvedic herbs, and Casey says Banyan has stopped selling herbs that it’s particularly concerned about, such as jatamansi and sandalwood. And guggul (or guggulu, as it’s sometimes called) may be next on that list. “It’s a resin, so it needs to be harvested correctly for the tree to survive,” Casey says. “The trees are being overharvested. It’s threatened in certain areas of India.”

Majeed says purity is another concern with guggul. The resin contains several compounds, but the active ingredients are the guggulsterones. “When purchasing guggul products, it is vital that the extract be assessed for purity and appropriate standardization.”

It’s not just guggul that requires stringent processing oversight, though. “Sometimes elevated levels of lead are found in Ayurvedic herbal products. This is where commodity-based sourcing of raw material can be problematic, Majeed says. “Cheaper material is not likely to be grown and handled to minimize lead levels that can come from soil and the environment.”

Putting it in practice

If responsible players in the industry can overcome these obstacles with a thoughtful approach, the category could be poised for substantial growth. It might even get a boost from the Affordable Care Act, too—if the profession can get out of its own way. A provision in the act supports the development of the health care work force—to include “licensed complementary and alternative medicine providers.” The only problem is, there currently is no licensure of Ayurevedic practitioners.

Savvy marketing will also help grow the profession, says Ayush’s Sodhi. “The yoga revolution happened because it was backed by strong marketers,” he says, specifically calling out Bikram Choudhury’s hot yoga system. “He adapted something unique and people were seeing results from it. I think for Ayurveda to do the same thing, there needs to be someone knowledgeable, who has credibility—not to sell, but to educate.” He hints that Ayush will be partnering with “the appropriate medium to make it more mainstream,” but says it’s too early to disclose that partner.

The more that Ayurveda becomes part of Western culture—whether as a result of yoga immersion, marketing or clinical studies—the more opportunity the practice and the products have for expansion. The only limiting factor may be the profession itself.

Integrative medicine by modality: Growth across the board
Oct 24, 2012