In the midst of a worldwide health scare over the H1N1 flu virus, literally dozens of scientific studies came out documenting the benefits of probiotics on everything from weight loss to eczema treatment to allergy prevention in children - and consumers were listening.

Who'da thunk it — America, land of the disinfectant, where germs are a dirty word and the goings-on of the digestive tract even more so, has embraced the consensual consumption of bacteria.

In the midst of a worldwide health scare over the H1N1 flu virus, literally dozens of scientific studies came out documenting the benefits of probiotics on everything from weight loss to eczema treatment to allergy prevention in children.

"The yogurt and kefirs category is showing significant growth in FDM over the previous year and that affects the increase in the ingredient," said Kerry Watson, manager of SPINS Product Library. "Additionally, in the natural channel, 485 new products were added to our Product Library containing probiotic content. Last year we only saw 284 new items with probiotics."

In total dollars spent, the digestive aids and enzymes supplement category dominates in FDM, capturing 79.2 million in sales, a 46.2 percent increase. This is followed by refrigerated juices and beverages with $3 million in sales, although that is down 27.5 percent over the previous year.

Ranking third is cold cereals with probiotics at $1.4 million, a figure -50 percent lower than the previous year's sales of $2.8 million. This can be chalked up to the discontinuation of Kashi's Vive brand probiotic-infused wellness cereal due to low sales.

Appearing for the first time in the FDM channel were candy and individual snacks ($78,000), and cheese and cheese alternatives ($41,000).

Just who buys these probiotics?

What may lie ahead

Michael Shahani, director of operations at Nebraska Cultures, sees future probiotics growth in three areas. "The 'traditional' supplement area still has potential for tremendous growth," he said. "It is still the best delivery system for probiotics, and the general public is just beginning to get an understanding about what probiotics do."

He also sees great potential in dried infant formulas, since a significant number of infants are never breast-fed and are thus prone to digestive problems. The third area is in refrigerated functional drinks, such as food or 'greens' or juice drinks, which can deliver the bacteria in a stable form.

Activity in the natural channel might give some other clues into next year's mass-market shoppers.

For the first time, baking mixes and flours fortified with probiotics began appearing on store shelves ($1,059 in sales), as well as probiotic teas ($4,400), other dairy and alternatives (21,400), and carbonated beverages ($32,500). Ganeden's BC30 brand probiotic ingredient is a spore-protected strain that can withstand the rigors of food processing. This unique technology ought to allow Ganeden's business to grow wildly as food manufacturers experiment with incorporating probiotics into whatever they can get their hands on.

"Formulating with GanedenBC30 has opened up entirely new markets, with products ranging from functional pizza crusts and breakfast bars to pasta and oatmeal," noted Mick Bush, NP of business development at Ganeden. "Consumers continue to tell us that they want the products that are already consumed on a daily basis to be fortified with GanedenBC30 rather than developing new products which would have to become part of a daily diet to provide the desired probiotic effect." 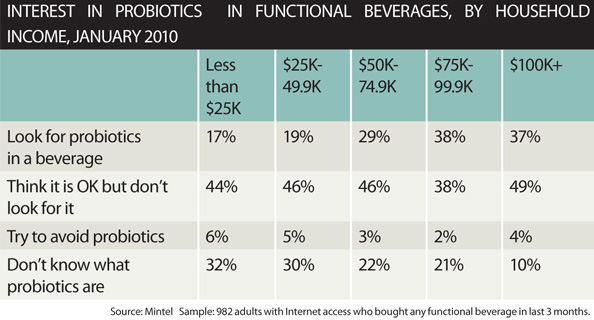