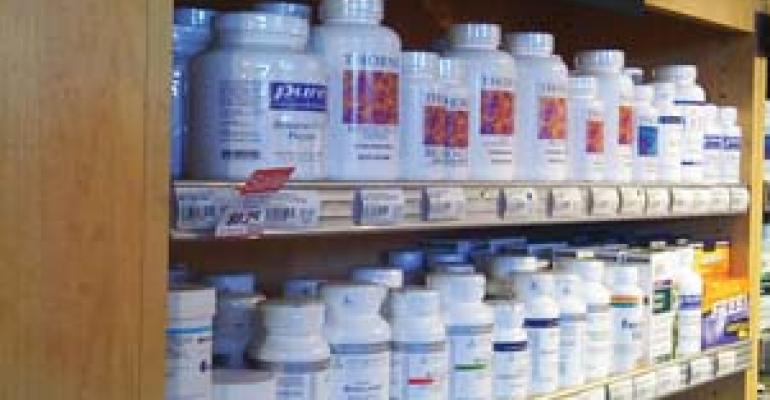 By pitching its yogurt as a single-serving fix for intestinal irregularity, Dannon created a top-selling global probiotics brand in Activia. And because of this false health promise—it actually takes three servings to yield results—the company had to fork over $21 million in December 2010 to settle Federal Trade Commission charges of using improper health claims on the product. This is just one example of the threats facing the digestive health products market’s well-being.

Last year, U.S. shoppers bought $1.2 billion worth of gut health supplements—9 percent more than in 2009, according to Nutrition Business Journal. These growth statistics make the category look like the picture of health—at least on a spreadsheet. Not even a 2009 ConsumerLab report revealing that several probiotics didn’t contain the colony-forming units guaranteed on their labels hindered sales of this marquee player among digestive health supplements.

“There’s growing consumer interest in and responsiveness to the notion that common health concerns, such as gas, bloating, fatigue, headaches, indigestion, constipation and diarrhea, are manageable with fiber, enzymes and probiotics,” says John Kenny, product educator for Super Supplements, a Seattle-based retail chain.

Still, experts say that weak scientific support for certain products, along with consumer confusion about the multiple benefits and origins of key digestive health ingredients, could eventually take their toll on sales growth—unless manufacturers and retailers get gutsy in how they support and market the gut health category.

The reigning king of the digestive health category, probiotic supplements generated $480 million in condition-specific sales in 2010, netting 19 percent growth over 2009, NBJ reports. “The probiotics market is half the size of the fish oil market, but it’s growing twice as fast,” says NBJ Editor-in-Chief Marc Brush. “If you’re in the supplements business, you’d have to have your head in a hole to not be paying attention to probiotics.”

What’s driving their rapid rise? “The medical community and consumers are starting to realize that digestion and related issues may be the root of all evil or the solution to all health concerns,” says Steve French, managing partner of Harleysville, Pa.-based Natural Marketing Institute. Although nearly 75 percent of probiotics users take them to improve digestion, a good number—almost half—take probiotics for general health, according to a 2009 NMI survey of 2,000 U.S. adults. “This is an indication that probiotics users are not necessarily addressing a specific digestion-related issue, but rather make the association between a healthy digestive system and overall health,” French says.

Probiotics sales have also taken off because functional foods, such as probiotic drinks, have increased consumer awareness of the category, notes Gretchen Vannice, RD, a Portland, Ore.-based nutrition research consultant. This development, ironically, has created more demand for probiotic supplements. “It’s difficult to get stable, high doses of probiotics into everyday beverages, and that creates opportunity for supplements,” Vannice says. “Consumers looking for a consistent dose, who may not want to eat or drink a particular food every day, will use supplements.”

Despite the upward growth trend, some experts worry that a shortage of high-quality research on some products could put the entire probiotics market in jeopardy. “In the U.S., there are myriad strains and species being sold in the natural retail market,” Vannice says. But only a select few of these strains and species are supported by solid research. That said, the natural products market is home to numerous “outstanding” probiotics supplements, Vannice says. The problem is that it’s challenging for retailers—and, in turn, consumers—to distinguish quality products and companies from the rest of the market. (See “How to evaluate digestive health products,” below.)

Like wine grapes, different species of probiotics behave differently, and one strain can’t be substituted for another for the same effect. Therefore, the importance of strain identification can’t be overemphasized. According to NBJ, the European Food Safety Authority has rejected every one of the 284 proposed probiotic health claims because of inadequate strain identification. And the U.S. Food and Drug Administration will likely follow in the EFSA’s footsteps if companies don’t gear up to refine their product research. Many manufacturers seem to have brought to market untested products in hopes that rising consumer demand will make them an easy sell. “People are introducing probiotics left and right,” says Anthony Almada, founder of IMAGINutrition, a Laguna Niguel, Calif.-based nutritional technology and marketing think tank, and an advocate for evidence-based product development.“They put in strains and add 100 billion CFUs. Does that mean that they work? Absolutely not.”

What does work, according to Almada, are probiotic strains coupled to a biological benefit demonstrated in humans. “If products don’t have that link, people are buying smoke and mirrors,” he says.

Some of Almada’s top picks include Lactobacillus GG, which is featured in Cromwell, Conn.-based Culturelle products in the U.S., along with Danisco’s HOWARU Bifido (Bifidobacterium lactis HN019), which is included in Orange, Calif.-based Naturade’s Probiotics 30B CFU and the newly released FloraFem from Cheyenne, Wyo.-based IntraFem. Clinical studies show that Lactobacillus GG is strong enough to survive stomach acids and colonize in the intestines, where it aidsdigestion. And a study published in the Scandinavian Journal of Gastroenterology in June demonstrated that HOWARU Bifido decreases colon transit time and improves gastrointestinal upset in healthy people.

Beyond strain-specific research, what else can help keep the probiotics market from slipping? Capitalizing on the manifold advantages of probiotics, NMI’s French says. “What we’re seeing is a fragmentation of benefits,” he explains. “You could make the point that the more benefits the better. Or you could make a counterpoint that if it loses the singularity in terms of its benefits, it can get diluted. Hence, consumers lose their focus and get confused.”

Some companies are banking on the former. “Consumers are drawn to probiotics as a supplement for supporting digestive health, immune function and a host of other beneficial effects,” says Rory Lipsky, LAc, marketing director for Los Angeles­–based Jarrow Formulas. The company’s flagship Jarro-Dophilus EPS, for example, includes research-tested strains to support intestinal health and immune function.

In July, IntraFem launched FloraFem, a complex formula that “does more than just probiotics,” according to the company’s marketing materials. Designed for stomach, intestinal and immune support, the product combines several well-researched, branded ingredients: HOWARU Bifido; PepZin GI, which is zinc plus the protein L-carnosine; Comforteze, which includes alkalizing minerals; and FemFerrin, a dairy protein that supports healthy gut flora as well
as immunity.

Another new product—Palm Harbor, Fla.-based ReNew Life’s Ultimate Flora Constipation Relief—targets occasional digestion problems in two different ways. The first of the two-part formula features a soluble chicory fiber to support beneficial bacteria in the colon, and magnesium to help soften stools. The second formula is a 30 billion CFU culture of Bifidobacteria probiotics as well as prebiotics to restore balance in the digestive tract. While the competition typically contains higher amounts of Lactobacillus than Bifidobacteria, ReNew Life tips the scale toward Bifidobacteria. “We formulate our probiotics to more closely resemble the natural balance of digestive bacteria found in the digestive tract,” says Brenda Watson, ND, CNC, president and founder of ReNew Life.

The aging population has caused digestive enzymes to become the second-largest gut health product behind probiotics. According to NBJ, digestive enzyme sales reached $210 million in 2010.

But enzymes have enjoyed only a fraction of probiotics’ success, perhaps because the category has a public relations problem to overcome, Almada says. The typical source of digestive enzymes—fungi—just isn’t appetizing to customers. “There’s a massive veil over enzymes’ origin,” Almada says. “Companies can’t say ‘fungus.’ That would be scary to customers.” Instead, manufacturers use a work-around: They call the source “vegetarian,” which sounds more appealing to consumers.

Companies also are combining enzymes with other ingredients to create more attractive formulas. For example, Port Charlotte, Fla.-based Enzymedica’s Digest Gold + Probiotics uses a special coating called TherActive to allow uncoated enzymes to be blended with probiotics in a single capsule. Without the protective layer around the probiotics, the enzymes in the product—or in the stomach—could potentially attack the probiotics, making the formula useless.

Another innovative formulation comes from Scottsdale, Ariz.-based Jigsaw Health. The company worked with Forsyth, Mo.-based National Enzyme Co. to design a custom enzyme blend for its Essential Blend Digestive Enzymes. Instead of including enzymes to break up protein, fat and carbohydrates equally—as most enzyme formulas do—this product omits those that break down carbs and fats and adds more enzymes to break down proteins.

Beyond novel formulations, Bloomingdale, Ill.-based NOW Foods is trying to entice customers by using enzymes that aren’t genetically modified in its Digest Platinum product. Although no third party tracks sales of supplier-verified non-GMO products like NOW’s, sales of Non-GMO Project Verified products grew a stunning 25.3 percent in 2010, according to Schaumburg, Ill.-based market research firm SPINS. NOW’s Digest Platinum also features a vegetarian enzyme base, as well as additional plant-derived enzymes for a broad-spectrum formula. These ingredients were tested in a lab to ensure they survive and stay active in the stomach’s acidic environment and the more alkaline conditions of the intestine, allowing the supplement to work throughout the entire digestive system.

According to Almada, natural laxatives such as fiber should be a sure sell. “In the over-the-counter drug world, laxatives are a billion-dollar category,” he says. “People buy the stimulant and chemical laxatives because they need rapid relief. But for whatever reason, fiber hasn’t ever gotten traction.”

Psyllium, a source of soluble and insoluble fiber, is the top-selling natural laxative, with $85 million in sales in 2010, NBJ reports. But customers still don’t get it—that is, they don’t get fiber in adequate amounts because they don’t understand fiber’s benefits. Case in point: The Dietary Reference Intake for fiber is 38 grams for males and 25 grams for females. Americans tend to get about half that.

In addition, more than 40 percent of consumers don’t associate fiber with digestive health, according to NMI’s Health and Wellness Trends survey of 6,000 U.S. adults. “This finding illustrates that even the most traditional ingredient, such as fiber, needs continued consumer education to maintain benefit understanding,” French says.

Chia is a prime example. People currently turn to this seed for its rich omega-3 content and anti-inflammatory properties. Those benefits are huge selling points: Chia racked up $3.3 million in natural-channel sales in 2010—a 68 percent spike from 2009, according to SPINS. Yet chia’s high fiber content—a combination of insoluble and soluble fiber—also helps support digestive regularity, says Rudi Moerck, president and CEO of Eustis, Fla.-based Valensa International, maker of ChiaMax and other chia-based ingredients. If consumers realized this additional advantage, perhaps sales would climb even more.

“Fiber products of the past weren’t easy or fun to take,” says Kyle Faino, director of marketing for Super Supplements. “Hopefully, the trend will turn and new products will be more palatable.”

Another laxative ingredient to watch: Danisco OsmoAid. This brand of lactitol, a disaccharide sugar alcohol, helps increase stool frequency in constipated adults and is well tolerated, according to published studies. Danisco launched OsmoAid in July, so look for supplements manufacturers to incorporate it into future products.

TAGS: Vitamins and Supplements Retailer and Distributor Products and Trends Archive
0 comments
Hide comments
Related
By the numbers: Fiber hard for Americans to swallow
Jul 28, 2010
Consumers Going With Their Gut
Apr 24, 2008
Enzymes take a bite out of digestive woes
Apr 24, 2008