HomeIngredientsHeavyweights for weight management
Recent
Latest
4 tips to get ahead of chemical concerns in packaging
May 20, 2022
7 CBD favorites in the increasingly popular gummies format
May 20, 2022
Mission MightyMe helps parents introduce allergens to babies
May 20, 2022
UNFI's Eric Dorne to step down as chief operating officer
May 20, 2022
Trending
Whole Foods' honors 30 companies with 10th annual Supplier Awards
May 18, 2022
Getting ready for 2023: Trends for brands to consider
May 17, 2022
Sponsored Content
The rise of sustainable business – eGuide
Sponsored Content
Natural beauty market trends
Jun 16, 2021
Natural Foods Merchandiser
brought to you by

Dietary supplements are frequently utilized by adults seeking to control their weight. A survey of 3,500 people trying to lose weight found that 70 percent attempt to drop pounds on their own, without a doctor’s assistance, and weight-conscious adults prefer to use supplements rather than drugs to control weight. One-third of those surveyed used supplements exclusively, and only 15 percent used prescription drugs for weight-loss management.

Some supplements users are rightly concerned about the safety of weight-loss drugs, while doctors appear to be more concerned about the safety of supplements. The withdrawal of the herbal stimulant ephedra from the marketplace gave a bad name to all supplements used for weight management or blood-sugar control. However, the short list of Food and Drug Administration-approved weight-loss drugs, all of which are fraught with undesirable side effects, prompts many people to search for safer alternatives.

More than 100 supplements are marketed for weight loss, including natural diuretics like uva ursi, juniper berries and dandelion root, or as other remedies that work in a variety of ways, such as chitosan, guar gum, ginseng, green tea, chromium, conjugated linoleic acid, hydroxycitric acid, psyllium, fiber and many others. Here are eight top weight-loss supplements and ingredients to keep on your radar.

However, a study recently published in the Journal of Alternative and Complementary Medicine investigated the long-term use of 14 dietary supplements marketed as weight-loss aids. Researchers found that long-term use of chromium and vitamins B6 and B12 had a modulating effect on weight in overweight or obese men and women. For example, weight gain over a 10-year period for obese men who didn’t take chromium was 11.7 pounds, whereas chromium users (150 mcg or more per day) lost 3.1 pounds. Among obese women, those who took chromium had a 3.2-pound weight gain, versus 14.1 pounds for the nonusers.

In another recent study of overweight, depressed patients, 600 mcg a day of chromium picolinate reduced carbohydrate cravings and overall appetite.

And in a study of five obese women with polycystic ovary syndrome, consumption of 1,000 mcg a day of chromium picolinate, without any change in diet or activity levels, caused a 38 percent improvement in the glucose disposal rate, which measures insulin sensitivity.

A revolution in the understanding of the need for vitamin D, both from natural sunlight and dietary supplements, is now underway. Research shows vitamin D has profound and broad influence over weight control and mood, which are intertwined. Consider the following facts:

Overweight individuals are frequently depressed. It is not uncommon for people who are overweight to be placed on antidepressant drugs, which are generally known to increase weight gain.

Low vitamin D levels are even associated with obesity in children (74 percent of obese children were found to be deficient in one study).

When researchers at the University of South Australia divided 68 overweight and obese people into groups and assigned them small daily doses of fish oil or sunflower oil, with half of each group also participating in an exercise program, they found that the group taking fish oil lost an average of 4.5 pounds over a three-month period, versus no weight loss with sunflower oil. In addition, a low-fat, low-
calorie diet with added omega-3 oils has been shown to reduce body mass index and waist circumference among obese adults. 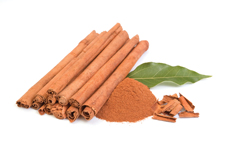 Found in grapeseeds, cinnamon, purple corn, berries and cherries, as well as other fruits and vegetables, anthocyanidins are iron-controlling molecules that inhibit the formation of fat within fat cells and have a great potential for the prevention of diabesity (obesity plus diabetes).

One study found that whole-fruit powder from strawberries and blueberries had no effect on weight gain, body weight or body fat when consumed with a low-fat diet, but consumption of purified anthocyanin (antioxidant flavonoids that provide pigment to fruits and flowers) extracts from strawberries and blueberries produced 13 percent to 34 percent less body-weight gain in animals. Why? The fruit extracts contain higher amounts of anthocyanins and less fruit sugar.

While the weight-loss drug orlistat (marketed under the names Alli and Xenical) inhibits lipase, the fat-breakdown enzyme, so does grapeseed extract, which may prove to be a safe weight-control agent. Higher lipase activity is associated with greater abdominal fat and body mass.

Adding this pungent spice to foods can increase the sense of fullness when eating meals. Cayenne pepper also increases calorie burning after a meal. And research shows that 30 minutes after consumption of chili peppers, blood-sugar levels are significantly lower when consuming a sugary drink.

A remarkable experiment shows a natural molecule may be able to single-handedly quell epidemic levels of obesity, high blood pressure and diabetes that now plague Western societies. Researchers in Israel compared allicin, an active ingredient in fresh-crushed garlic cloves, to enalapril, a drug often used to treat hypertension. Rats were fed a fructose-rich diet for five weeks. During the last two weeks, groups of 10 animals received only fructose, fructose
and allicin or fructose and enalapril. The allicin group’s blood-pressure levels, insulin and triglycerides dropped. More remarkably, the fructose-fed rats were massively obese, while the fructose-plus-allicin-fed animals were normal weight.

Green tea contains caffeine. High caffeine consumption has been shown to reduce weight, fat mass and waist circumference more than low caffeine consumption. However, when obese adults were given both low-caffeine and high-caffeine green tea with 270 mg of the active ingredient EGCG, the low-caffeine group still had significant weight loss. Therefore, it’s possible that EGCG pills may be more beneficial than tea drinking in regard to weight control. 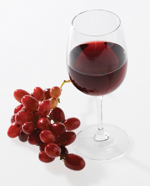 In recent years, researchers at the Massachusetts Institute of Technology and Harvard Medical School have come upon a remarkable molecule that aids in weight loss. Resveratrol not only switches on the same gene that calorie restriction activates—sirtuin 1, a DNA repair gene—but it is also a potent inhibitor of fatty acid synthase, the key enzyme involved in the conversion of carbohydrates to fat in mammals.

While resveratrol is found in 70 species of plants as wide-ranging as mulberries, peanuts and grapes, it is concentrated only in wine. Alcohol has some beneficial health properties, but it has been demonstrated that dealcoholized red wine also produces health benefits, and that resveratrol is the primary active agent in red wine.

A study conducted with muscadine grapes, which are known to be rich in resveratrol, is instructive. Healthy adults and adults with type 2 diabetes drank either muscadine grape juice, wine or dealcoholized wine. Only the dealcoholized wine drinkers with type 2 diabetes showed significant improvement in insulin sensitivity. There was no effect for grape juice.

Resveratrol can be taken as a dietary supplement, without the calories or alcohol of wine. But beware that exposure to light, heat or oxygen may alter its molecular structure into cis-resveratrol, which does not activate the sirtuin 1 calorie restriction gene.

For a further weight-loss boost, resveratrol can be combined with another antioxidant, quercetin. Studies show that resveratrol or quercetin alone inhibits the ability of fat cells to produce fat by 15 percent to 18 percent, but when resveratrol and quercetin are combined, this inhibitory effect climbs to 73 percent—nearly a fivefold difference.

Weight-loss supplements: a category in transition

Weight-loss supplements sales plummeted after the May 2009 recall of Hydroxycut, a supplement that was reported to cause health problems. Sales at supermarkets, drug stores and mass merchandisers fell 15 percent from July 2008 to July 2009.

Consumer mistrust of “magic” diet pills grows. Industry insiders see a movement toward weight-loss products and ingredients that are easily understandable and paired with lifestyle changes.