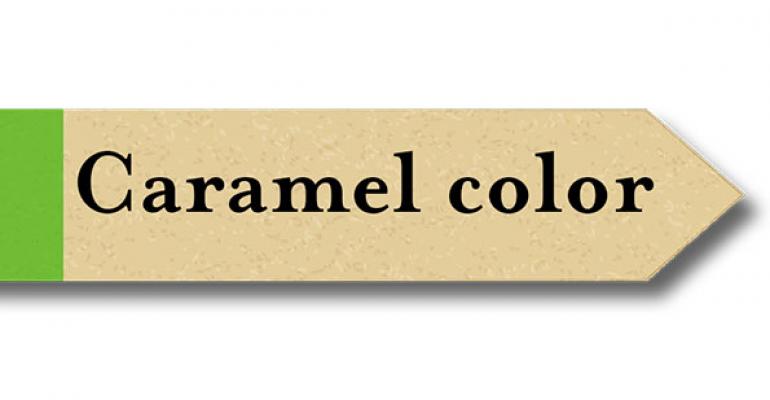 What is caramel color?

Caramelized sugar, derived from corn, wheat, cane, beets or another form of simple carbohydrate. The manufacturing process varies depending on the class: Class I, or “plain,” is heated to caramelize it. Class II, otherwise known as “caustic sulfite caramel,” is used in select alcoholic beverages and uses sulfites in manufacturing. Class III (often used in beer, baked goods and confections) uses ammonium. Class IV, which makes up about three-quarters of caramel color sales, uses sulfites and ammonium. The lower the class, in general, the lighter the color. 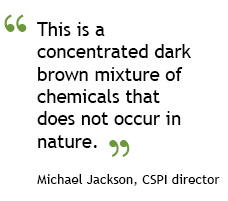 It’s the most broadly used colorant in existence, accounting for roughly 80 percent of colorants, according to ingredient supplier DD Williamson. It is ubiquitous in colas, soy sauce, seasonings, breads, cereals and pet food.

In February 2011, the Center for Science in the Public Interest petitioned the Food and Drug Administration to ban Class III and Class IV caramel coloring, alleging it was contaminated with two “cancer-causing chemicals” 2-methylimidazole and 4-methylimidazole (4-MEI), created as an unintended byproduct of the manufacturing process. CSPI also asked that no products containing the two colorants be allowed to be labeled natural. “Most people would interpret ‘caramel coloring’ to mean ‘colored with caramel,’” said CSPI director Michael Jacobson. “This is a concentrated dark brown mixture of chemicals that does not occur in nature.”

In January 2012, California began requiring a cancer warning on products containing more than 29 micrograms of 4-MEI. According to a recent report by Consumer Reports, many beverages—including Pepsi One and Malta Goya still significantly exceed those levels.

What the science says about caramel color

One mouse study by the National Toxicology Program showed an increase in certain lung tumors among rodents exposed to 4-MEI, and the World Health Organization considers it a possible carcinogen. The FDA, however, points out that 4-MEI can also be formed as a byproduct from roasting coffee beans or grilling meat, and says that the amount used in studies “far exceeded current estimates of human exposure.” DD Williamson spokesperson Campbell Barnum adds that the rodent studies were done on 4-MEI, not on caramel color. “There has never been a study that has showed any safety issues with caramel color at all.”

Safety issues aside, many in the natural products industry believe Class III and IV caramel color should not be present in products labeled natural. Whole Foods Market and Natural Products Expo both permit only Class I caramel color in their offerings. Class I is now the fastest-growing category (organic and non-GMO Class I offerings are available). But switching to the lighter, more natural option can cost a company more, says Barnum, because the lighter it is, the more a manufacturer has to use to make the product dark.

Meanwhile, some consumers appear skeptical that even Class I is natural. In July, consumers filed a class-action lawsuit against Whole Foods for using caramel coloring in its 365 Everyday Value Cola. Because it’s impossible for a consumer to know the difference by looking at the label, CSPI says avoid the ingredient altogether.

Do you think it's OK for natural products to contain caramel color? Why? Or why not?