HomeIngredientsIs carrageenan natural?
Recent
Latest
4 tips to get ahead of chemical concerns in packaging
May 20, 2022
7 CBD favorites in the increasingly popular gummies format
May 20, 2022
Mission MightyMe helps parents introduce allergens to babies
May 20, 2022
UNFI's Eric Dorne to step down as chief operating officer
May 20, 2022
Trending
Whole Foods' honors 30 companies with 10th annual Supplier Awards
May 18, 2022
Sponsored Content
The rise of sustainable business – eGuide
Sponsored Content
Getting ready for 2023: Trends for brands to consider
May 17, 2022
Sponsored Content
Unboxed: 7 plant-forward ice creams to stock this summer
May 10, 2022
Natural Foods Merchandiser
brought to you by 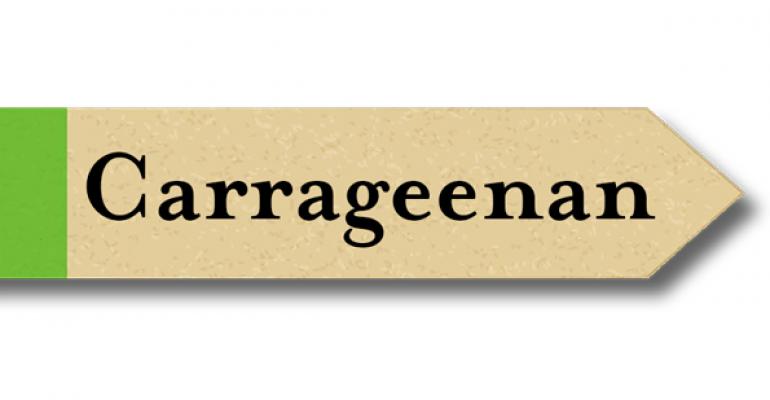 Today, two distinct varieties of carrageenan exist in U.S. manufacturing: Food-grade, or “undegraded,” is extracted with heat, water, and mild acids and alkali. “Degraded” carrageenan, a.k.a. “poligeenan,” is extracted by boiling it in much stronger acid “like battery acid” for long periods to reduce it to a small molecule, says William Matakas, seaweed platform marketing manager for ingredient supplier FMC. Poligeenan is used in medical imaging (to make shakes consumed prior to an MRI) and in animal studies to induce inflammation. Some health agencies characterize it as a potential carcinogen. “It is a completely different compound, and it is never used in food,” Matakas stresses.

Matakas estimates the food-grade carrageenan business to be worth roughly $1 billion globally. According to the Seaweed Industry Association, U.S. consumers ingest 30-50 mg per day. It’s used as a thickener to make low-fat yogurts, ice creams, dressings and sauces retain creaminess, a preservative to make products like protein beverages, jams, snack bars and infant formulas shelf stable, and a vegan alternative to gelatin.

In April 2012, University of Illinois researcher Joanne Tobacman, MD, petitioned the National Organic Standards Board to ban carrageenan from organics because of mounting research suggesting it prompts an inflammatory immune response similar to that of salmonella. In 2013, the nonprofit Cornucopia Institute petitioned FDA to remove carrageenan from the food supply. Both petitions were denied.

What the science says about carrageenan

Dueling studies have arrived at different conclusions. In 2014, the World Health Organization completed a review of the science (much of it industry funded), concluding that food-grade carrageenan is safe for use in infant formula. But numerous publicly funde 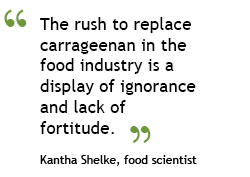 Food scientist Kantha Shelke, PhD, believes the current “hysteria” over carrageenan is largely a matter of mistaken identity. She and others note that many oft-cited studies used degraded carrageenan (poligeenan) in lab animals not people. “There is no epidemiological evidence for a carcinogenic, tumor promoting or inflammatory effect of (food-grade) carrageenan in humans,” Shelke says. Some research does suggest, however, that food-grade carrageenan can be contaminated with its more lethal cousin during the production process, and that it can become “degraded” by stomach acid. Matakas says no way. “Your body is about the pH of orange juice, not battery acid, and it isn’t boiling.”

Organic Valley recently vowed to rid its heavy whipping cream and aseptic chocolate milk of carrageenan. Companies are testing agar and gum Arabica as potential substitutes. Shelke says such moves could come at a cost, jeopardizing the safety and palatability of the finished product. (When Starbucks removed it from its milk alternatives, customers complained that it looked spoiled and didn’t make their coffee creamy enough.) “The rush to replace carrageenan in the food industry is a display of ignorance and lack of fortitude,” says Shelke.

Meanwhile, the Cornucopia Institute has developed a shopping guide for avoiding carrageenan and intends to keep on the FDA to—if nothing else—get it out of organics. “Even if I gave the industry the benefit of the doubt and said that the research is mixed, I would still say it should not be in organic food,” says Director Mark Kastel. “We should operate under the precautionary principle and preclude things unless there is a high degree of comfort that they are safe. We don’t have that.”

Is it OK for carrageenan-containing products to carry a natural label? Why? Or why not?