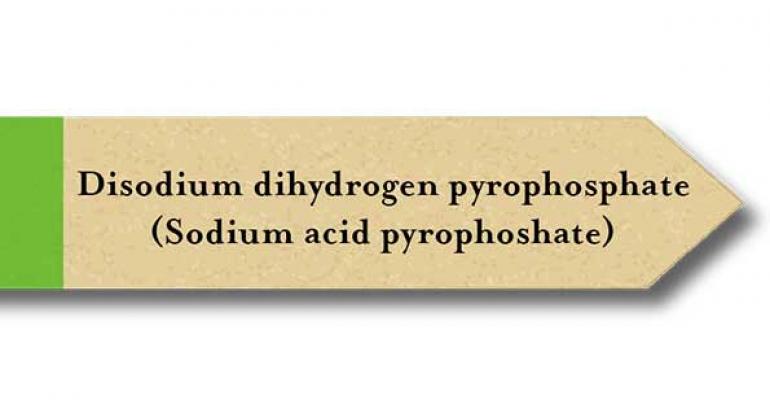 What is disodium dihydrogen pyrophosphate?

One of dozens of varieties of phosphates used as food additives. It’s derived from mined phosphate rock which is purified to isolate the phosphorous and further processed to add sodium or other desired molecules. “It is basically a mineral that comes out of the ground and is then processed into a synthetic chemical,” says food scientist Mary Mulry, PhD, founder of consulting firm FoodWise. 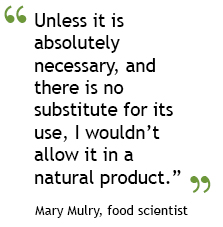 According to the International Food Additives Council, phosphates are used for an array of reasons, serving as leavening agents to fluff up foods, in nondairy creamers to reduce acidity, in lunchmeat to keep it moist, in bread to keep it from molding, and in cheese to help it keep its shape. It’s also used to prevent potato products from blackening and to keep tuna from discoloring or drying out. “Cheap seafood is often soaked in sodium phosphate,” says Mulry. “It’s a way to sell more water than seafood.”

In 2011, the Food and Drug Administration sent a warning to Alexia Foods accusing it of misbranding its potato products by using the phrase all natural despite the fact that it contains disodium dihydrogen pyrophosphate “which is a synthetic chemical preservative.” The additive was used to retain color in its potato products.

In 2012, German researchers published a report warning that phosphates in general can be hazardous to health when consumed in excess, contributing to renal failure and cardiovascular disease. It added that intakes were rapidly going up because of their presence as food additives and called for clearer labeling of phosphates. “Phosphate additives in food are a matter of concern, and their potential impact on health may well have been underappreciated,” the researchers said.

In January 2014, the FDA issued a warning that over-the-counter sodium phosphate medications used to treat constipation should be limited to one dose in 24 hours, or can cause severe dehydration and lead to electrolyte imbalances and organ damage. On its website, the International Food Additives Council says “long-term ingestion of extremely high levels” can lead to bone and tooth decay. “However, this concern would not be expected to occur in normal food consumption patterns.” Most agree that the amounts contained in individual food products are small enough to be benign.

Sodium phosphates are not allowed in organic products, except in certain dairy applications where no substitute can be found. In the absence of a natural standard, their use is a matter of company discretion, said Mulry, and in most cases she would advise companies not to use them. “Companies need to be asking themselves: What are you using it for, and is it an appropriate use that is not misleading the consumer? Water retention in seafood is misleading. If you are trying to preserve the color with an artificial preservative that is misleading. Unless it is absolutely necessary, and there is no substitute for its use, I wouldn’t allow it in a natural product.”

Is it OK for disodium dihydrogen pyrophosphate-containing products to carry a natural label? Why? Or why not?