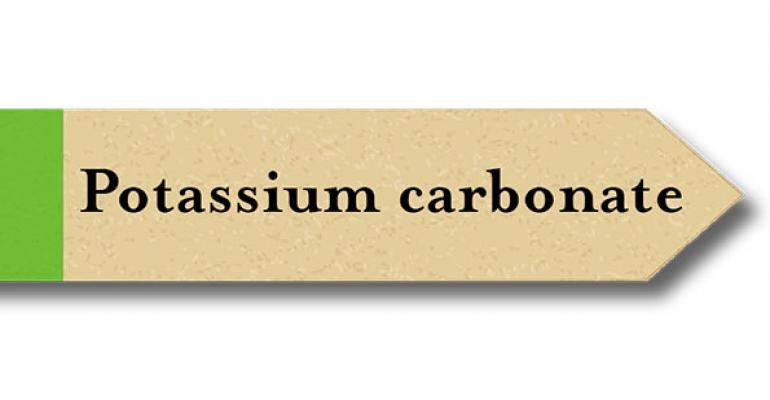 What is potassium carbonate?

As a major component of the mined salt potash, this white powder (sometimes called pearl ash) was derived for centuries by heating potash in a kiln to remove impurities, says food scientist Kantha Shelke, PhD. Today, it is made synthetically by subjecting the chemical potassium chloride to an electrical current. 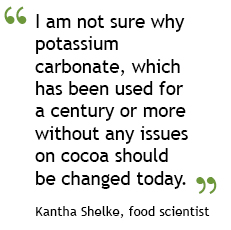 Before the advent of baking powder it was used as a leavening agent (German gingerbread is still made with it). And it has long been used to soften hard water. Today it’s used to reduce acidity in wine and plump up fish fillets and prevent them from discoloring. It is a key processing aid in the manufacturing of alkalized, or Dutch, cocoa, enriching the color and flavor, lessening the bitter taste, lowering the fat content, and making it mix well in liquids. “The original reason it was used,” says Shelke, “was so less cocoa could be used in a product. It was a way to economize the recipe of cakes and cookies.”

In 2010, consumers filed a $5 million class action suit against Ben & Jerry’s Homemade arguing that the company misled consumers by calling its ice cream all natural despite the presence of cocoa alkalized with potassium carbonate “a manmade synthetic ingredient.” It went on to point out that the FDA states a product is not natural if it contains “synthetic substances” and added that “unfortunately, Dutch processing destroys most of the flavanols present in cocoa.” (In January, a judge denied a request to certify the case as a class action suit, effectively killing it). In July, according to press reports, consumers filed a suit against Unilever, maker of Breyers Ice Cream, for the same reason.

What science says about potassium carbonate

According to FDA, there is “no evidence” to suspect a hazard to the public when potassium carbonate is used at current levels in food. In fact, chocolate alkalized with potassium carbonate is allowed in organic food. “I am not sure why potassium carbonate, which has been used for a century or more without any issues on cocoa should be changed today,” says Shelke. “It is used to soften water. This would not be allowed if it were dangerous.”

When it comes to promoting health, however, numerous studies show that non-alkalized chocolate delivers more benefit. One 2008 study in the Journal of Agriculture and Food Chemistry found that unprocessed cocoa powders contained roughly 10 times the health-promoting flavanols as heavily processed alkalized powder. In the cocoa industry, cocoa that is not alkalized is referred to as natural.

Breyers and Ben & Jerry’s have changed their labels to no longer say all natural, and some specialty chocolate companies now boast that their products are non-alkalized.

Is it OK for potassium carbonate-containing products to carry a natural label? Why? Or why not?