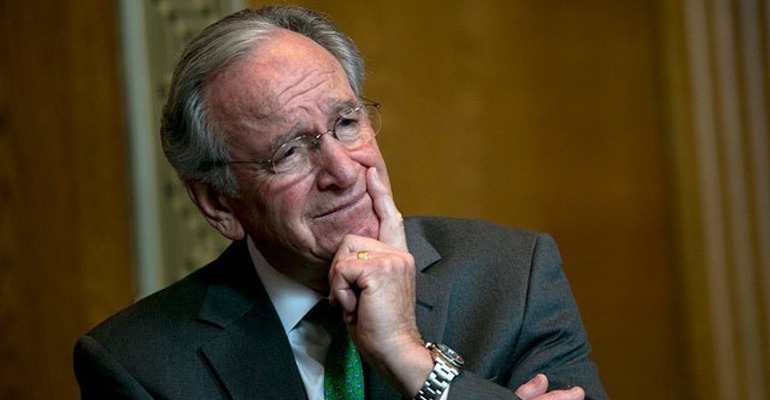 Tom Harkin spent more than 40 years in Congress, including 30 years in the U.S. Senate, and was long noted as one of the nutrition industry’s best friends in Washington. The retired senator is still a force for healthy living through his Harkin Institute for Public Policy & Citizen Engagement at Drake University.

Nutrition Business Journal Editor-in-Chief Rick Polito and farmer/activist Andrew Pittz interviewed retired senator Tom Harkin shortly after their road trip to Natural Products Expo West 2017. Read about the trip, and the connection between food, farming and health, in the five-part Road to Natural series, beginning next week, on newhope.com.

Pittz: How have the challenges facing farmers changed since you first went to Congress in 1975?

Harkin: Well, I think when I first came to Congress in 1975, all the farmers were concerned about were program crops and the old farm bill, and extending. You were rewarded for how much you grew and what you grew, which I always thought was a bad idea. Rick Nolan, congressman from Minnesota, and I wanted to change it so that you were rewarded on the basis of, not how much you grew and what you grew, but what kind of steward you were of the soil, how you were meeting the different needs of consumers in America and expanded it to include things like fruits and vegetables. Well, we were singularly unsuccessful. So what changed is that now, and I worked hard on this through the years, is to begin to focus on the ultimate consumer and not just the wholesaler or the processor, for what should people be eating and what should their diet look like; and then incentivize that. So today I think you're finding more and more farmers focused on what the ultimate consumer really wants and what different kinds of crops can be grown to meet those kinds of demands. I was successful in getting some changes made to start rewarding farmers for stewardship of the soil, how well they took care of their land and soil erosion and tills and things like that and that goes to benefit a lot of farmers who grow smaller crops: orchard, fruits, vegetables, that type of thing. So that's sort of the changes that I've seen take place over the last, well, I guess it's been almost 50 years now.

Pittz:  Well, what do you think consumers can do to help American farmers grow healthy farms and healthy foods?

Harkin: Well, keep pressing your congressmen and senators to quit supporting these farm bills that just try to continue down the old road of supporting commodity crops and give more support to small farmers, beginning farmers, more support for farmers who want to become organic. There need to be lines of credit to the Farm Credit Administration that go to beginning farmers, with very low rates of interest, to grow crops that meet health needs, whether it's aronia berries or blueberries or fresh fruit and give incentives to farmers to perhaps do more greenhouses, to supply fresh vegetables year around to city markets and to consumers. So the incentives should be changed. What consumers need to do is to keep banging on their congressmen. Even though they're not members of the AG (agricultural) Committee, they've got a vote on this stuff. Pressure them to make those kinds of changes and just keep organizing, keep sounding the alarm that we want healthier food in our diet and we want our farmers to grow those healthy crops.

Pittz:  You mentioned that the farm credit system and issues to capital is so important, especially for young farmers. So let's take somebody who didn't inherit a farm. How do we encourage policymakers and institutions to help young people get started in farming?

Harkin: Well, you need some changes in the law, but you also need secretaries of agriculture or others that will start to push the Farm Credit Administration to do that. But the ultimate decider on this is still Congress. And the people who hold the sway on this in Congress are still congressmen basically, from the big crop states—Kansas, Oklahoma. They're still focused on corn and soybeans and rice, cotton, wheat—those big crops. And that's who they listen to. That's why I say you need some outside congressmen and senators that are maybe not on the AG Committee from our states that grow more vegetables and fruits to really begin to push this agenda. We have support for this from our California senators and California congressmen but there's still a few California congressmen that represent huge farmers and they weigh in pretty heavily on this, but we need some help from some of these other states. That's why you’ve got to put the pressure on Congress.

Polito: For the young farmers then, do you see the future as organic?

Harkin: I really do believe because I've seen young farmers who don't own thousands of acres, but just have a few acres, and grow a damn decent living out of it and frankly there ought to be room in agriculture for what I call those urban farmers and what some people call part-time farmers. We have a lot of spaces in our cities that the mayors or city councils can set aside for urban gardens and then you encourage people to do that, providing for the things that they need, like water protection, maybe even providing a healthy subsidy for seeds and plantings and agricultural type support for pest control. There's a lot of unused spaces in cities that can be be used for orchards, vegetables. Two or three greenhouses can produce some kind of vegetables and lettuce and kale and different things, even in the winter months in many localities. I don't see any thought being given to that by mayors and city councils, but they should.

Harkin: When you do value-added processing, of course the processor makes money, the producer, the farmer makes income and the consumer at the end gets a product that they want. They want a more organic, healthful product that's grown without a lot of pesticides and herbicides. Consumers also want to know 'Where does this come from? Who’s doing this?' So I see this as just a huge growing industry in this country. I can only assume that this is on a very steep slope, in terms of the amount of money that's being generated through value-added processing.

Polito: So many of the dietary supplement ingredients are grown overseas. What benefits could the industry and the public realize if those were grown in the U.S.?

Harkin: Obviously, if more and more of the ingredients that go into supplements are produced here in America that means that more economic activity is generated here in our country and again this is where the government ought to be helpful in providing the kind of incentives needed to produce those ingredients. I don't know how many billions and billions of dollars we've spent sent World War II building up the wheat and corn and soybeans and rice. Why can't we then think about the next generation of agriculture which is to grow the kind of ingredients that go in supplements? And again, here's where a small farmer, doesn't need thousands of acres of land; just a little something. They need the capital to get started, access to the processors that can add the value to it to get it to the ultimate consumer. I just think there's a lot to be gained from this, but again we need the government to provide those incentives upfront.

Pittz:  Do you see government-funded research on the economics of value-added crops as being a driver for rural economic development?

Harkin: I come from a state where our small towns and communities are drying up. People are leaving. They don't have access to schools any longer or basic services. But all around them we still have the same kind of agricultural land as we had 50 years ago, or 100 years ago. The farms got huge. They're totally mechanized and rely on artificial inputs of fertilizer, for example. I'm not saying you can turn the clock back, but what if we had research to show that a group of small farmers in the area could grow these types of value-added crops? What would the economic impact would be for a small community? You'd have more people living there, spending money in the local area rather than someplace else, and I think this could be a great part of stemming the exodus from rural America into our cities. Like I said, I know we're not going to go back to the early 1900s, but we don't need to make ghost towns out of every small town in America, especially when the resource is there—the land for example to produce these kind of value-added crops. So yes, we need government research to show the added economic benefits to certain areas of having more producers, not less, more producers, producing different kinds of crops rather than the monoculture that we've become used to in the U.S.

Pittz:  We recently completed this road trip to Natural Products Expo West 2017 to explore the connection between food, farming and health. What would you like the impact of that trip to be?

Harkin: I would like to see more of an understanding among consumers, generally speaking, and among say packagers, processors, big grocery chains. Have them make that connection between the food, the farmer and healthful living and how they might go about changing their operations to better fold in this concept. Let me just give you one example. I also started something back in the 2002 farm bill called the Fresh Fruit and Vegetable Snack Program in schools. The idea was to provide free, fresh fruits and vegetables to kids in schools to see how it would go over. I started with a small amount of money, $5 million. We took 25 schools in four states, and asked: “What if you provided free, fresh fruits and vegetables?” Well, it just went over really well, even though the Bush administration tried to kill it in the first few years, but then by 2006, I came back as chairman again and was able to expand the program in that farm bill and the farm bill after it. So today, it has been so successful that, for example, Dole packages fresh fruit and vegetables just for this program. It's gotten so large. So that's what I mean. No one would have done that without this program. We put the money into it and the kids loved it. And they loved the fresh fruits and vegetables. Packagers said ‘Hey we ought to start packaging for that. We can make a little bit of money on that.’ That's just, again, one example of how important a bit of value-added is to the health of people. The kids are eating healthier. People are making money all along the lines and fruit and vegetable farmers are making more money, too.

Polito: In September, we're going to be doing another road trip, this time to Natural Products Expo East in Baltimore, leaving from Andrew's farm. Were you aware that you are coming with us?

Harkin: I didn't know until now, but give me the itinerary would ya?