The many uses of cannabis, from industrial hemp to recreational marijuana, is the hottest growth story in botanicals. In the global arena, questions surrounding supply chain dominance are adding urgency to this opportunity.

Hemp, fittingly, is now growing "like a weed" around the globe. By the end of 2017, the global hemp trade was valued at $3.1 billion and is expected to nearly double that to an estimated $5.7 billion by 2020, according to New Frontier Data.

It’s hard to think of another crop that increased production that fast, and even as the industry is growing like a weed, questions around how to build a supply chain that big and that fast are growing even quicker.

And while the rising wave of CBD awareness is a U.S. story, on a global scale the picture is more complicated.

Some of those complications are rooted in the surprisingly broad uses this single plant represents. According to Hemp Business Journal, industrial hemp can be used in an estimated 50,000 different products across a wide spectrum of industries, from textiles to food products, building materials to bio-plastics, nutraceuticals to nanomaterials, ethanol to animal bedding.

In 1941, for example, Henry Ford introduced a prototype automobile built almost entirely of hemp—all the way down to the fuel source. In its December issue that year, Popular Mechanics declared that one day Ford would “grow automobiles from the soil.” Unfortunately, as hemp had been outlawed in 1937 because of its association with marijuana, the project stagnated. But the promise of hemp-fueled bio-plastics remains today, and 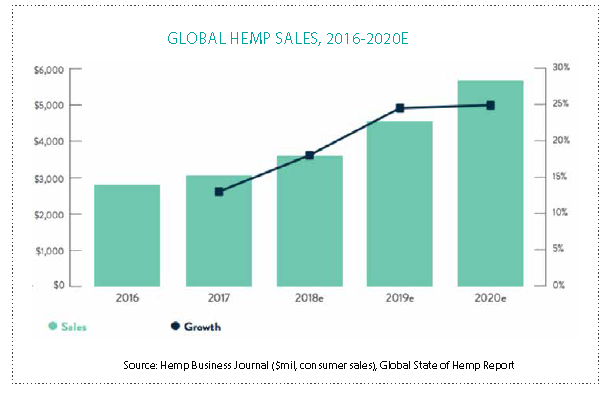 auto makers like BMW use it for door panels and dashboards.

China set to dominate another industry

Many countries have their own domestic hemp markets, which usually are focused on specific industrial applications. Just as the U.S. market is taking off, export opportunities to Central and South America are slowing, as countries such as Uruguay, Brazil and Columbia establish their own domestic markets.

China is now the world’s leader in hemp production, responsible for $1.1 billion in domestic sales—roughly one-third of the entire global market, according to New Frontier Data. With a 6,000-year history of growing hemp and rapid movement into new opportunities, China presents a difficult market from which to capture data. Estimates of the Chinese hemp acreage in 2017 range from 100,000 acres to 200,000 acres or more.

But China grows hemp mostly for textiles. More than 75 percent of the Chinese hemp industry goes toward consumer cloths and woven fabrics. Of the remaining 25 percent, $200 million is for industrial applications and personal care, while hemp-derived CBD is just a tiny sliver of that at $53 million, according to Hemp Business Journal.

One only-in-China facet of Chinese law is that exclusively Chinese companies can grow and sell hemp in China. Foreign companies are required to export any Chinese hemp they source. This—coupled with the Chinese government driving the planting of market-dominating acreage—makes China the leading source of hemp for other countries in Asia, including South Korea and Japan.

China’s 2012 five-year plan specified hemp among three commodity crops for which it would establish infrastructure. Four research institutes and a medical university have been tasked with conducting research into the greater cannabis plant, while the world’s largest CBD extraction facility opened in China in 2016, according to San Francisco investment house Mazakali.

The trick with China is manifold. The Asia-Pacific region is home to six out of 10 humans—more than 4 billion people. And Chinese hemp, specifically, is very much poised to dominate that market in the years to come, much like Chinese-based ingredients dominate the whole of the dietary supplements ingredients business.

“Demand for Chinese-grown hemp is expected to soar as consumers around the world embrace the plant’s versatile uses,” said Giadha Aguirre de Carer, founder and CEO of New Frontier Data. “Within Asia, Japan and Korea will be particularly promising markets for CBD products, both to serve the large beauty and cosmetics markets and to provide low-risk therapeutic alternatives for the large aging populations in both countries.”

But for now, the main issue with Chinese-grown hemp is that it is grown for textiles. And hemp grown for textiles looks very different from hemp grown for its trendy use in America—namely, CBD. Yet the risk is more than manifest, with Chinese hemp likely already making it into U.S. CBD products. As with any product that has a supply chain spanning the globe, maintaining quality raw material from farm to final factory presents potential challenges.

“A lot of hemp in China is for textiles,” said Jared Stanley, vice president of cultivation for Charlotte’s Web, the leading CBD producer in the U.S. “The back side doesn’t have quality-control parameters that we might see on U.S. oil. Unfortunately, it might go through a middle man in Europe, and people think they might get hemp free from pesticides and herbicides and fungus, from reputable companies in Europe, but it might be from China that’s grown for textiles and not for human consumption. That’s a problem.”

Another compelling storyline in Asia is Thailand. While nations the world over define legal hemp as cannabis with less than 0.3 percent THC, Thailand defines it as less than a full 1.0 percent THC. That percentage is a goal for many in the U.S. hemp industry, and the primary reason why the core hemp industry was able to prevail itself upon Colorado voters, who in the recent November elections voted to take the definition of hemp out of the Colorado constitution and instead make it a mere statutory definition. This gives the Colorado legislature the flexibility to redefine hemp however they want, and the core Colorado hemp growers would like nothing more than to see the definition of industrial hemp move to that higher 1.0 percent THC threshold, just like Thailand.

If Thailand can prevail upon at least Southeast Asia, the rest of the region could follow suit, with the global market not far behind in following that definition.

In Europe, France is far and away the leader in hemp production—mostly for fiber and grain production. In 2016, France led Europe by growing about 35,000 acres, followed by Estonia with 8,500 and the Netherlands with 6,000 acres.

U.S. CBD leader CV Sciences began selling CBD, with its PlusCBD Oil, before the 2014 Farm Bill was signed, by sourcing hemp from the Netherlands and having it processed into oil in Germany.

“We started sourcing hemp before there was a source,” said Josh Hendrix, director of domestic hemp production for CV Sciences. “Obviously, hemp is ramping up everywhere. In France and China it’s for the stalk, the fiber, of the plant. In Europe it’s used for dashboards for cars.” Europe is far ahead of the U.S. in processing capability and capacity, Hendrix says. “There are processing bottlenecks in the U.S. We’re years behind Europe, but that’s all changing quickly now.”

With Canada fast on the way to legalizing all things cannabis, the great white north is looking to become a dominant global player in the hemp business.

Canada has a burgeoning export market. Sales to South Korea, were about $235,000 in 2014-15 but then absolutely skyrocketed to $16.7 million the next year, and then to $31.7 million in 2016-17, according to the Canadian Seed Trade Association. When China noticed its neighbor buying all that Canadian hemp, it aggressively moved in on the South Korea market, much to the chagrin of Canadians, according to New Frontier Data.

“Canada is an easier place to navigate and cultivate hemp,” said Stanley. “That’s because they average your last ten years’ test results, and the average has to be less than 0.3 percent THC. That’s because hemp [THC content] can vary region to region and season to season.”

Manitoba Harvest, the global leader in hemp foods, and its partner ingredient supplier, Hemp Oil Canada, received self-affirmed Generally Recognized As Safe (GRAS) status in 2018 for its complete line of hemp seeds, oil and protein powder. The company has also submitted to FDA for GRAS notification.

“We care so deeply about transforming consumer health and removing any doubt about the benefits of hemp foods, that we’ve invested hundreds of hours on the rigorous process to obtain GRAS notification from the FDA,” said Bill Chiasson, CEO of Manitoba Harvest. “This is a milestone for the entire hemp food industry.”

“Hemp seeds are a sleeping giant pushing into the mainstream,” said Mike Fata, founder of Manitoba Harvest. “We’re excited for this new ‘it food’ status.”

Hemp’s fortunes seem to be growing nowhere but up. Whether it’s for the health benefits of CBD in America or hemp seeds for nutrition or get-high dope for adult entertainment in Canada, textiles in China or industrial applications such as cars and clothes in Europe, the hemp revolution is changing the way the world regards what was once a questionable commodity.

Now that so many companies and countries stand behind it, hemp isn't just growing like a weed. It’s growing whole industries along with it.