Innovating on sustainability and whole foods in omegas 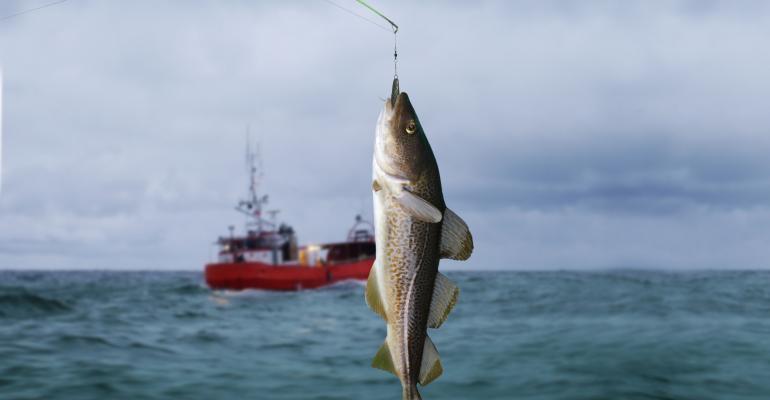 Companies expand targeted nutrients beyond fats (and sources beyond fish) as they build a sustainable omega market.

By the looks of it, the khaki-colored paste emerging from the extruder could be salted caramel ice cream. In fact, the substance is frozen cod livers, augur pulverized as the first step in oil extraction. This new Alaskan facility is the first cod liver oil operation in North America—surprising, as millions of tons of cod have come through this port and others each year for decades, with a substantial volume of livers discarded.

“I saw a fantastic opportunity in Dutch Harbor,” says Jeffrey Bland, Ph.D., a founding partner in Bering Select, who stumbled on the opportunity upon meeting an owner of Clipper Seafoods, the largest Bering Sea cod processor, at a cocktail party.

The opportunity Bland saw was to make a minimally processed, whole-food cod liver oil from the clean MSC-certified waters of the Bering Sea. At first glance, the oil is old school: pure and simple, significantly differentiated from the highly processed fish oils dominating the market. But it’s more than that. By introducing immediate on-vessel freezing to ensure freshness and to stabilize the metabolic dynamism of the livers, the resulting oil comprises a full spectrum of nutrients not yet seen in a cod liver oil—not presently and not over the centuries the oil has been harvested, largely in Norway, for its nutritive value.

The market-dominating concentrated oils certainly have their benefits. They are winterized, saponified and distilled, initially to eliminate toxins in the oil but also to boost concentrations of EPA and DHA. The oils are also deodorized, resulting in a nearly flavorless product. The marketability of these oils speaks for itself.

But Bland and his new partner, Clipper, saw a different path to market. The downside of the heavy processing, he says, is that it removes a great deal of other compounds. Vitamins A and D, for instance, are virtually eliminated, with synthetics typically added back into the oil later. Bering’s processing compromises the oil very little, presenting a whole and nutrient-balanced oil. (As they approach market readiness, they’ve included two other partners in the enterprise: local native organization Siu Alaska Corporation and international oil supplier Marine Ingredients, which will be handling the distribution of the oil.)

“On the fish oil side there’s a lot going on with companies trying to differentiate,” says Ismail. “I would include the Dutch Harbor project in that.”

In the Dutch Harbor facility, Bering Select’s oil plant manager Todd McMelon describes the processing. Packs of livers come off of the boat at 5 degrees below zero and are immediately run through the “ice cream” phase. Then it is pumped through double wall piping into contherm cookers. “Then we put it into a tricanter, basically solids come out one end, oil and water out the other end,” McMelon says. Next, a vertical centrifuge separates the oil and water, and a vacuum drier gasifies any remaining water. Only the pure oil remains.

“We have an oil that has never been seen before,” says Bland, “because of the nature of our processing method and the way these fish are caught and processed on board and the fact that they’re taken from these Alaskan waters that have not been subjected to intensive pollution.” The result is not just a cod liver oil, Bland says, "this is a new composition of matter.” The company has named the ingredient NutraSolv3, the “3” representing the primary trio of components in the oil: omega-3s, unadulterated levels of naturally occurring vitamins A and D, and specialized pro-resolving mediators (SPMs), which Bland describes as “substances that orchestrate the immune system.” The latter element, he says, “was a very exciting discovery and, in fact, what we found was that the levels of these found in the oils were comparable to that which you find in mother’s breast milk.”

Pre-clinical trials in recent years have demonstrated that SPMs (albeit, often utilizing stabilized synthetic SPMs) play a role in the resolution of pathological inflammatory responses. The presence of naturally occurring SPMs in synergistic “orchestration” with other nutrients is particularly exciting to Bland. “Livers of fish, like livers of humans, are partly an immune organ as well as a metabolic organ,” he says. “The liver has a lot of immune function [and] is actually involved in protecting the animal against infection and injury and inflammation through its immune system.” Furthermore, he continues, “when we look at the SPM levels in our oil from Alaskan fish, we recognize it’s probably not remarkable that our levels of SPMs are really quite high.”

Here Bland gets philosophical about the nature of natural. “Nature produces things not just at random but in a design sometimes that we don’t really understand,” he says. “And that differentiates from just taking out one or two principals out of a natural mixture and saying, ‘we’ve got the right stuff!’” For Bering’s product, that means vitamin A and vitamin D working with the SPMs to regulate the expression of specific genes associated with modulation of the inflammatory process. “We now know that these nutrients that are found within a complex natural mixture, biologically do, in fact, participate together as a team to regulate our metabolic function. Without a full team you don’t have full benefit.” The natural foods industry story that there’s something uniquely important about preserving the complexity of nature, he says, “is really true when we get down to understanding biological mechanisms and how the body works and responds to complexity in our diet.”

No discussion of sea sourcing—or perhaps any sourcing—can avoid the topic of sustainability. Bering Select feels good about their sourcing. Not only are they harvesting a previously discarded byproduct, but it’s a byproduct from one of the better managed fisheries in the world. The Bering Select oil is MSC certified, and harvested according to strict rationalized fishery quotas established by NOAA Fisheries. Further, Clipper Seafoods lands their catch by line, not trawler. About bottom trawlers, Clipper’s VP of Operations Joel Watson says, “What they do is they need to spread the opening of that net out. This gear is hard on the bottom, it’s rolling over the bottom. Say, if there is coral or any other type of fish down there, they just roll over it. It’s like a scoop shovel.” While very efficient at catching fish, he continues, “I think they can be very devastating.”

Omegas of the desert

Another sustainable view of omega manufacture can be found in a landlocked locale some 3,200 miles southeast of Dutch Harbor. The dry desert terrain around Columbus, New Mexico, is a stark contrast to the verdant mountainous volcanic Aleutian Islands. It’s a flat desert landscape and, notably for the omega-3 business, lacking in ocean or, frankly, water. Here and in Imperial, Texas, Qualitas Health operates giant algae ponds originally developed for biofuels by Sapphire Energy. Qualitas pivoted the 900-acre farm (110 acres of which are currently in production) from biofuels to nutrition.

CEO Miguel Calatayud says the project is about feeding a growing population. “We are going from 7.5 billion people now to 10 billion people in 2050,” he says. “Everybody knows that, but what people don’t realize is that in order to keep the same level of nutrition, we need to produce about 70 percent more nutrients and protein. And the seas are hurting, there’s not enough arable land, there’s not enough water. What are we going to do?” Calatayud believes Qualitas has a solution.

Moreover, by operating in the desert, without a need for fresh water, the operation doesn’t compete for traditional agricultural resources. “We use non-arable land, we use brackish water, we use sunlight as the main source of energy for our production. We are 100 percent sustainable, and this is why we can really transform farming, food and nutrition.”

Bringing it back to omegas, Calatayud talks about their ingredient AlmegaPL and their consumer brand, iwi (reaching consumers nationally through Vitamin Shoppe), boasting the highest bioavailability on the market. He presents it as simple food chain mathematics. “The reason krill has higher bioavailability than fish is because krill is closer to the source,” he says. “We are the source.”

Theirs is an EPA-only oil with naturally occurring phospholipids and glycolipids that increase absorption. Furthermore, says Calatayud, they can hit a competitive price. “We are able to go to the market with a comparable market price in omega-3,” he says.

This has not been the case, historically, says GOED’s Ismail. Algae is more expensive to produce. “The main value of fish is protein,” he explains. The oil is essentially a byproduct. “It makes it very cheap to make oil products.”

Where is all of this going?

“A lot of companies are shifting their focus to Asia because that’s where a lot of growth is,” Ismail says, transitioning into a market view. While growth has slowed in the United States and Europe, he says, “Asia’s getting to the point where it’s large enough that it’s really interesting for companies.” There’s a downside: “It means companies are turning away from the larger established markets.” Even that has a flipside, however. Some of the innovation, Ismail observes, is being driven by the stagnation. “That’s good, but we’d like the growth to come back.”

The global market’s probably going to grow 4 to 5 percent in the next few years, Ismail estimates. Asia will continue to see strong growth, but North America is difficult to predict, he says. “But,” he says, “there are some things on the horizon that could reinvigorate the market.” He lists four large clinical trials currently working on the hypothesis that fish oil supplementation may reduce cardiovascular risks.

The VITAL study, performed by Brigham and Women’s Hospital, an affiliate of Harvard Medical School, compares vitamin D3 with omega-3s for their ability to reduce the risk of cancer, heart disease and stroke. Amarin’s REDUCE-IT study and AstraZeneca’s STRENGTH study both look at omega-3s' ability to boost the effectiveness of statins, and the ASCEND study, a collaboration between the British Heart Foundation, Bayer and Abbott Products, compares fish oil with aspirin in reducing cardiovascular events in patients with diabetes.

As these studies publish the anticipated positive results, there is likely to be a spike in interest in both pharmaceutical fish oil, and the variety of innovations seen in omega supplements.

Finding innovative, sustainable solutions might benefit more than the omega market. If better health is the goal of the category’s producers, and the health of the planet is part of the equation, innovation could be more important than ever.