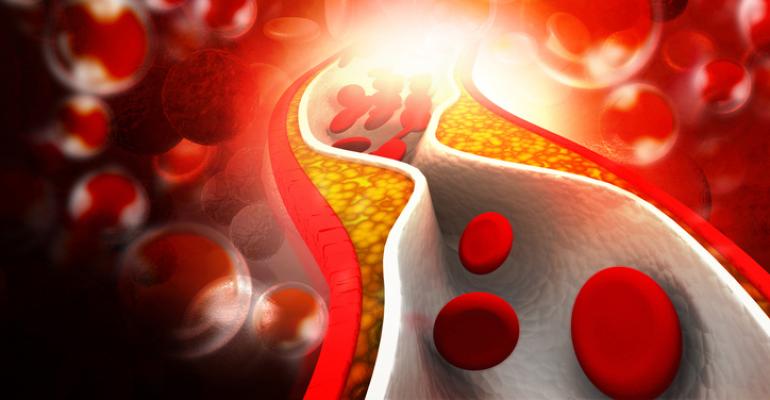 Is K2-7 the most heart-healthy vitamin? A new study replicates results on hardening of the arteries.

A new human clinical study reaffirmed vitamin K2’s ability to improve arterial stiffness. Those arteries are hardened by calcium, and the menaquinone-7 form of vitamin K2 works by controlling calcium by activating the body’s K2-dependent proteins to shuttle calcium to the proper areas—out of the blood vessels and into bones. Atherosclerosis—hardening of the arteries—is the top cardio killer, so finding a natural solution has tantalizing health benefits for millions of Americans.

The main conclusion was that vitamin K2 supplementation was associated with improvement in subclinical K deficiency and arterial stiffness. According to the researchers, the findings from this trial support the hypothesis that subclinical vitamin K deficiency may be a modifiable cardiovascular risk factor and may improve with MK-7 supplementation.

Related: How vitamin K2 gets from seed to shelf

The new study, published in Journal of the American Society of Hypertension, was on 60 kidney transplant recipients, a group shown to express subclinical vitamin K deficiency. Researchers studied whether vitamin K2 would correct this deficiency and thus improve arterial stiffness. Results showed that 360 mcg per day of vitamin K2 as menaquinone-7 (MenaQ7 from NattoPharma) for eight weeks was associated with significant improvement in arterial stiffness as well as 24-hour peripheral and central pressures. The mean reduction in carotid-femoral pulse wave velocity (cfPWV) was 1.4 m/s, which was well beyond the reduction of 1 m/s recommended for a clinically relevant vascular effect.

“While our previous cardiovascular study in healthy postmenopausal women showed an improvement in arterial elasticity after three years of supplementation, the results collected in this trial are staggering, especially as the statistically significant effect was seen very quickly,” said Hogne Vik, chief medical officer of NattoPharma. “After just eight weeks of MK-7 supplementation, low vitamin K status, represented by dpucMGP level, was significantly reduced by 55.1 percent. Moreover, supplementation was associated with a 14.2 percent reduction in mean cfPWV.

“One can assume that longer MK-7 supplementation may lead to even better results,” Vik said, “and secure improvement in cardiovascular outcomes in renal transplant patients.”

A two-year study is currently under way in Europe on patients with coronary artery disease to see if vitamin K2-7 can change the coronary artery calcification score, which develops early in the progression of atherosclerosis and is a “strong and independent predictor” of cardiovascular disease. The study design is a double-blind, placebo-controlled trial using 360 mcg of vitamin MK-7.

When vitamin K2-7 was first studied, the effective dose was seen using only 45 mcg. Subsequent studies have doubled the dose to 90 mcg, and then doubled again, to 180mcg. This study doubled the dosage again.

Make no bones about it

That K2 has an ability to properly build bone matrix by shuttling calcium away from accumulating in arterial walls and into bones was validated in a 2016 study. This year-long study was on 148 postmenopausal women with osteopenia (lower-than-normal peak bone density but not bad enough to qualify as osteoporosis) who already supplemented with calcium and vitamin D. Researchers found that 375 mcg of vitamin K2 preserved bone structure and bone quality, while the placebo group showed deterioration in all bone markers.

A 2017 published review on vitamin K2-7’s influence on bone health concluded that correcting nutritional insufficiencies in vitamin K2, in combination with vitamin D and calcium, leads to significantly less incidence of low-energy bone fractures in children and young adults.

“This review is so very significant, providing supporting evidence to the clinical research NattoPharma has already spearheaded,” Vik said. “Not only has our research identified children as a group most deficient in vitamin K2, but that just 45 mcg of K2 (as NattoPharma’s MenaQ7) daily improves K status and increases the activation of osteocalcin, the K-dependent protein responsible for binding calcium to the bone mineral matrix, therefore improving bone health.”

The notable aspect of children’s bone health is that the top determinant of osteoporosis incidence among postmenopausal women is a person’s peak bone mineral density during adolescence.

“The new proposed nutritional regimen may not only prevent low-energy fractures among children and young adults, but will also contribute to building the ‘bone bank’,” said lead researcher Vladimir Badmaev, Ph.D., founder of American Medical Holdings. “This will help to prevent development of osteoporosis later in life and prevent untoward cardiovascular risk.”

This is a clarion call for supplements makers to integrate the small dose of 45 mcg—that’s 1,000 times less than a milligram—into children’s supplement lines, as well as postmenopausal women’s SKUs.