The latest with GMO crops 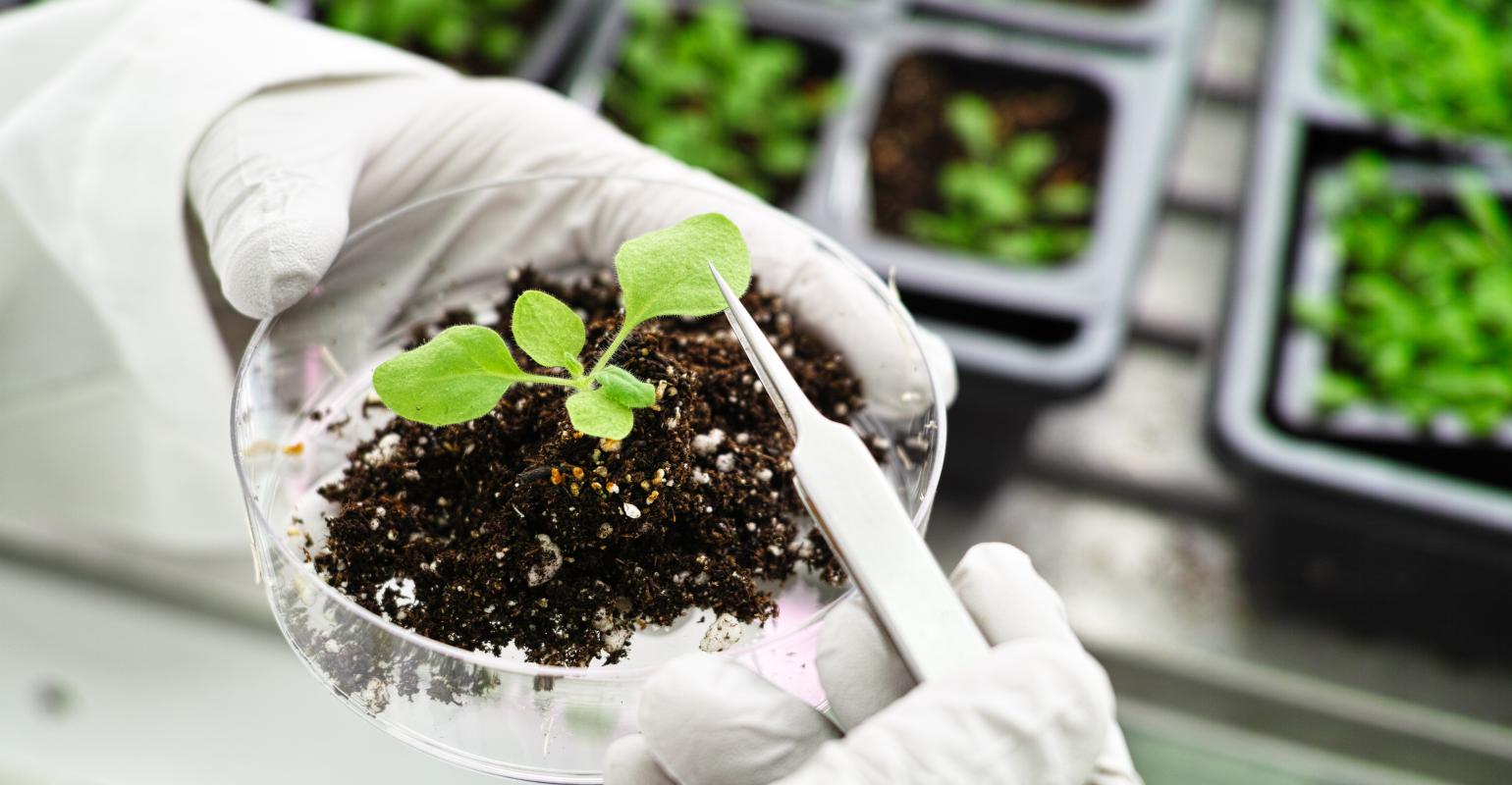 For all of its promises, GMO technology is largely unfounded. Here's why avoiding foods made from genetically modified organisms is still a good idea.

It’s early November 2012, and California is teetering on the precipice of an extraordinary drought that would eventually spark the governor to declare a state of emergency and strict limits on water use.

But inside their homes, California citizens are experiencing a different type of "natural" disaster—a tsunami of television, radio and print advertisements attempting to sway voters to either pass or kill Proposition 37, controversial legislation that would require all foods made with genetically engineered ingredients to be labeled as such. It's extremely close: "Prop 37" fails to pass by just 353,700 votes—a mere 2.8 percent margin.

Related: Why the Senate's new GMO labeling bill is inadequate

Despite the near-equal results, however, those against mandatory GMO labeling outspent their opponents by a whopping $37 million. Big Food spent lavishly to convince voters that labeling GMOs would raise food prices by "billions of dollars" (not true) and dwindle the economy (also not true). The largest company that lobbied against the state-specific legislation was (surprise!) also the largest manufacturer of genetically engineered seeds in the world—Monsanto Co., which donated more than $8 million to the “No on 37” campaign. Mandatory state labeling is blocked … for now.

Fast-forward to 2016, and a lot has changed. To date, third-party certifier the Non-GMO Project has verified more than 39,000 natural products, making the "butterfly" label one of the most recognized seals on store shelves. Non-GMO Project verified products garner $19.2 billion—yes, billion with a “b”—in annual sales, which supports the polls that show 93 percent of Americans would like to see GMOs labeled on food and beverage packages.

The good news: Nationally required GMO labels will soon be coming to stores. In July 2016, President Obama signed into law a bill that requires food companies across the nation to disclose the presence of genetically engineered ingredients, a move that some natural advocates, such as the Organic Trade Association, lauded. "This legislation includes provisions that are excellent for organic farmers and food makers—and for the millions of consumers who choose organic every day—because they recognize, unequivocally, that USDA Certified Organic products qualify for non-GMO claims in the marketplace," the association said in a statement.

At first glance, the federal law, which says a national mandatory bioengineered food disclosure standard must be crafted in two years, sounds stellar. Isn’t this the exact legislation GMO labeling advocates have worked for years to achieve? Well, not exactly.

Importantly, the law suffers gaping loopholes that can obscure the presence of genetically engineered ingredients. Although champions of GMO labeling have always rooted for greater food transparency, under the new law, food brands aren’t required to include a straightforward indication that GMOs are present, such as one that simply reads “Partially Produced with Genetic Engineering” on the package. Rather, the new law allows brands to disclose GMO ingredients via veiled tactics, such as through a QR code, phone number or website listed on the package—all methods that demand a smartphone or cell phone to decipher.

This is bad for a number of reasons, the least of which is that it would be a pain for shoppers to pull out their smartphone, track down a store’s Wi-Fi password, download the QR code app, scan the code and wait for the information to upload onto their phone—all just to find out whether a product was made with genetically engineered ingredients. "Let’s say [a shopper] has 50 products in his basket," said Senator Barbara Boxer, D-California, who avidly opposed the bill. "Does he have to make 50 phone calls? Can you imagine looking up 50 websites? Scanning 50 different QR codes with a confusing cell phone app?"

Some say the law discriminates against Americans who cannot afford a smartphone, who live in rural areas where cell service or Wi-Fi is spotty, or who are senior citizens. Just 30 percent of people older than 65 even own a smartphone, says Pew Research Center. Such obstacles in this recent legislation indicate that steps to responsibly create, use and sell genetically engineered ingredients are not over.

But as we move into an era of greater understanding about this still-fledgling technology, it behooves shoppers to understand the reasons why it’s important to shop for non-GMO foods, of course, as well as the arguments against them.

You’ve likely heard someone—your friends, family or even some news organizations—say that ingesting genetically engineered ingredients is harmful to human health. But although isolated (and potentially flawed) animal studies suggest that pigs fed GMOs experienced stomach inflammation, and that rats fed GMO corn developed tumors, the scientific consensus is that GMOs are safe to ingest. The World Health Organization (WHO), the American Medical Association, the FDA and the National Academy of Sciences (NAS) all say so.

But there are still strong reasons to purchase products that feature the Non-GMO Project Verified label or USDA Organic seal.

One big reason: environmental impact—a scientifically stronger impetus to avoid foods made with this technology. As Eric Pierce, director of strategy and insights at New Hope Network, recently wrote, “We need to discuss, in a lot more detail, agricultural practices, water quality, soil quality and the risks of direct and indirect exposure to agricultural chemicals.”

GMO proponents argue that we can’t feed the world without this technology. But most of the solutions biotech promises—including solving world hunger and reducing agrochemical use—have not been realized. Instead of easing environmental issues associated with conventional crops, GMO technology has in many cases exacerbated them.

Let’s start with agricultural chemicals. The vast majority of GMO crops are developed to resist the herbicide glyphosate, which Monsanto sells under the brand name Roundup. When a field is sprayed with glyphosate, the weeds die but the crops survive. It’s an admittedly smart system that allows Monsanto and other ag companies to reap both seed and herbicide sales from farmers. But herbicide-resistant crops have only heightened glyphosate use.

The main reason: what some plant biologists call “superweeds.”

Because glyphosate use has drastically worsened, the very weeds that farmers have tried to keep at bay evolved to resist it. It’s as if kryptonite suddenly had no impact on Superman—a once-deadly substance now must be used in greater and greater doses to achieve the same result. This phenomenon isn’t limited to weeds. Some GMOs are made by inserting the protein of a toxic-to-insects soil bacteria called Bacillus thuringiensis into a plant’s DNA. When bugs such as the European corn borer or corn rootworm, insects that can devastate crops, chomp on the plant, they die. But as one 2014 study relates, the toxic bacterium “places intense selective pressure on pest populations to evolve resistance,” meaning that insects can evolve just as superweeds do.

As pests grow stronger in the face of the chemicals designed to kill them, potentially more environmentally damaging herbicides and insecticides are needed for effective management of genetically engineered crops—an issue that we have to deal with not in ten years, not in five years, but now.

In 2015, the USDA approved three varieties—corn, soy and, most recently, cotton—of Enlist, genetically engineered crops designed to resist sprayings of three different herbicides: glyphosate, glufosinate and 2,4-D, a powerful chemical that has been found in streams and groundwater. Plus, scores of research show that prolific glyphosate use (application of the herbicide has increased a hundredfold since 1970) may harm human health. In 2015, WHO’s International Agency for Research on Cancer concluded that glyphosate is "probably carcinogenic to humans." But these potential environmental and human impacts are the price we must pay for genetic engineering’s high yields, right?

In a 2016 report, the NAS found no definitive evidence that GMO crops measurably raised yields. True, yields for corn, cotton and soybeans—nearly all of which are genetically modified in the United States—have been steadily increasing since the 1980s. But that rate of increase did not change after GMOs were widely adopted—it remained the same, suggesting that it may be improvements in conventional, not genetically engineered, agricultural practices that are to thank for increased crop volume.

GMOs are probably not the silver bullet for ending world hunger. Even Golden Rice—beta-carotene-containing genetically engineered rice designed to deliver vitamin A to people in developing nations—has issues. Although it was lauded on the cover of Time magazine 16 years ago, the rice is still not in commercial use. Some blame this stagnation on "anti-science" activist organizations like Greenpeace that are avidly against the grain. But a 2016 paper published in Agriculture and Human Values suggests that the issue is much more complicated and that Golden Rice "has proved difficult to breed into varieties that grow well specifically in the Philippines," the rice’s target market.

Some experts also say Golden Rice is a Band-Aid to the complex problem of vitamin deficiency that has little to do with food. "Golden Rice is a highly technical approach to solving a nutritional problem resulting from cultural and socioeconomic factors,” wrote New York University food studies professor Marion Nestle on her blog Food Politics. “Is Golden Rice worth a try? Sure it is. But not when it is used to demonstrate that GMO foods are good for the public as well as the owners of seed and pesticide companies.”

Perhaps Golden Rice is a good idea. Perhaps GMOs can one day markedly increase yield while eliminating the need for agricultural fertilizers and pesticides. Perhaps the few companies that make GMOs will one day loosen their grip on the world food supply and instead manufacture seeds that don’t require synthetic chemicals to flourish. Perhaps laws will one day require GMOs to be labeled, clearly, on product packaging, not hidden in the caverns of a smartphone app.

But GMOs aren’t there yet. They may never be.