Most of the rice sold in the world is white, meaning someone has stripped the tiny grains of their most nutritious components, the bran and the hull. RIBUS, a St. Louis company, discovered a way to make use of the bran—it turns out those discarded pieces were also good at keeping pasta from getting stuck in an extrusion machine, and could even replace the function of fat in fat-free foods. Based on that discovery, RIBUS found reasonable revenue for a couple of decades.

And then it discovered the supplement industry.

In the words of the company’s longtime consultant Bernie Landes, “RIBUS became an overnight success after 25 years in business.”

Peirce says the transformation started 10 years ago, when RIBUS started putting that other piece of the rice, the hull, to work. “Rice hulls are extremely high in silica, and people were looking for an alternative to silicon dioxide,” Peirce says.

Silicon dioxide is a powder that’s used as a “flow” or anti-caking agent, Peirce says. It’s used in many spices, seasonings and dietary supplements. Anything that is sold as a powder that could “lump and clump,” he says, needs a shot of silica to help it stay powdery. “Put it in,” he says, “and now it flows.”

RIBUS—the company name is an acronym of sorts for Rice Ingredient Business United States—called the new product Nu-Flow and created a niche product for a very big niche.

It’s an old story of a government requirement opening up a new market, and a company flourishing, says Landes, now president and founder of Nutritional Products Consulting Group in Laguna Niguel, Calif., and RIBUS’ first customer when he worked at Health Valley Foods in the 1990s. People had been pushing the USDA to restrict the use of silicon dioxide for years, Landes explains. Nu-Flow became essential the moment it became available. “It suddenly became the most important category in the dietary supplement space.”

Landes likens it to other situations, such as when Nutrition 21 successfully petitioned the government to declare chromium an essential mineral, paving the way for meteoric growth for its Chromax chromium picolinate product. Or when the government suggested people limit their salt intake or increase fiber intake, sending sales of low-sodium and high-fiber products soaring.

“This is a fairly frequent phenomenon, government initiatives play a role in the explosive growth of industry companies,” Landes says.

In this case, the government ruling on silicon dioxide thrust RIBUS to the fore of an industry in which it had never played before.

“I didn’t know anything about the dietary supplement industry,” Peirce says. “We sampled it, they liked it, and started buying…. As we worked with the supplement people, they would say, ‘That’s nice, what else do you make?’ I said, ‘We have emulsifiers. What else do you need?’”

The answer: lubricants. Supplement makers use a lot of magnesium stearate, which helps when making a vitamin tablet or capsule. The magnesium stearate prevents the tablet from sticking to the equipment, and it helps the two pieces of the capsule stick together.

RIBUS teamed up with the German company Biogrund, which took RIBUS’ patented products into its lab and developed an alternative, combining RIBUS’ Nu-Rice and Nu-Flow with gum arabic and sunflower oil. Natoli Engineering, one of the largest producers of punches and tooling for tablet-making equipment, tested the new product and reported that it worked nearly as well as magnesium stearate. Peirce would have been thrilled if it worked half as well; these results left him “ecstatic.”

When RIBUS, Biogrund and Natoli revealed the results at a breakfast meeting in Las Vegas, people lined the room. At Engredea in March, more than 150 people attended a presentation, and at least 25 came to the RIBUS booth looking to strike a deal. The desire for a natural alternative to magnesium stearate has companies clamoring for Nu-Mag, the new product. If you’re making a natural product, you don’t want a chemical name like magnesium stearate on your label, when you could instead say it includes “rice extracts.” 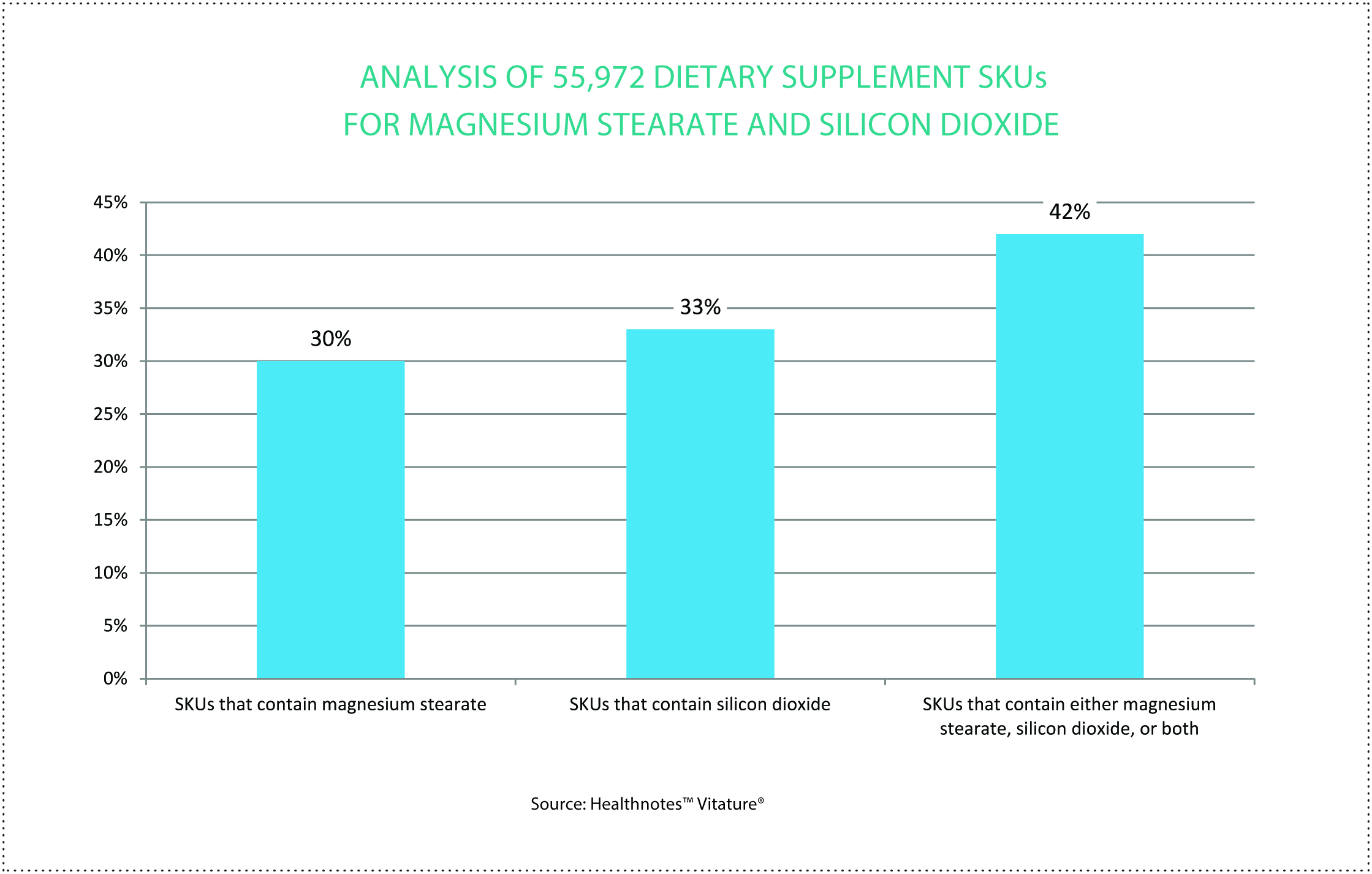 Although RIBUS is growing fast, the company is still small in some respects. As a privately held company, it does not release revenues; Peirce said its sales were less than $10 million. It only has eight employees on the team, but three of those are new positions created in the past two years, since the development of Nu-Mag.

Peirce says RIBUS has been able to stay small by outsourcing most of its functions. The company boasts 125 sales representatives covering 130 countries. It uses 22 different broker and distribution companies with 135 sales reps in 35 different countries as well. Companies are responding; Peirce says Gemini Pharmaceuticals in New York makes more than 500 different products with RIBUS ingredients.

RIBUS’s eight employees are in five different locations. “We use contract manufacturers, contract warehouses, contract labs, brokers and distributors,” Peirce says. “We’re scalable but we’re as virtual as you can be. Technology is our friend.”

If the growth spurt had hit 10 years ago, Peirce figures RIBUS would have had to build a manufacturing facility, but today he’s got other options.

RIBUS doesn’t grow its own rice, but instead buys the bran and hulls, all from rice grown in the U.S. Peirce estimates 60 percent of the rice it buys is organic. By using the excess parts, Peirce says, RIBUS is enabling use of “100 percent of the rice…. It’s the ultimate sustainability story.”

Peirce’s late father Jim founded the company in Baton Rouge, La., in 1992 with a friend from church, Neal Hammond. Jim Peirce had worked in sales his entire career, and owned a bakery at the time. Hammond had a degree in nutrition, and had volunteered in the Peace Corps in Belize in the early 1970s, where he saw firsthand the impacts of hunger, and how underutilized the healthy components of rice were.

Over the next two decades, Hammond held various food industry jobs, but clung to the notion of doing more with rice bran. He floated his idea to Jim Peirce, and RIBUS was born. Steve Peirce was 32 at the time and working for Monsanto in St. Louis, and he came aboard. Hammond had the technical know-how, Jim Peirce handled operations, and Steve Peirce knew sales and marketing.

Breakfast cereal was an early growth category. Another was pet food. “The person making the food decisions for the table is also making those decisions for the family pets,” Peirce says. “Now that those options exist, that person has buying power reaching across the whole family, whether they’re two-legged or four-legged.”

With “humanization” the biggest trend in pet foods, those consumers don’t want chemicals in their pet food, either, and are demanding more natural products.

Additionally, RIBUS is positioned for further growth, consultant Bernie Landes says, as companies look for ingredients that are not only safe, but beneficial as well. Because of the high nutritional value of rice bran, RIBUS is already there. And with Nu-Flow’s high silica content, it could serve as a replacement for the herb horsetail as something that spurs hair and nail growth, Landes says.

RIBUS has two or three more ingredients in the works. All excipients (what Peirce calls “supporting cast members”) they will come out this year or in 2018 as RIBUS seeks to cement its new status as the go-to excipient supplier for the supplement industry.

In doing so, a brand based in bran is making the most of the least and cleaning up in clean label.

RIBUS sales boom as silicon dioxide use falls
May 28, 2014