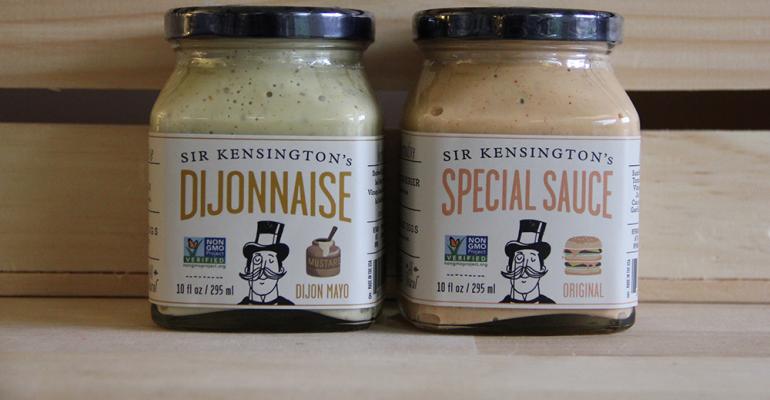 The condiment brand says the deal will enable it to fulfill its mission of bringing "integrity and charm to ordinary and overlooked food" better than before.

Sir Kensington's, the New York-based company known for its cleaner condiments and quirky branding, has been scooped up by Unilever, which owns the Hellmann's mayonnaise brand and an extensive portfolio of other food and beverage, personal care and home care brands.

Seven-year-old Sir Kensington's sells its products—which include Non-GMO Project verified mayonnaise, mustard and ketchup—at retailers like Whole Foods, Sprouts and Earth Fare. It also garnered attention for its innovative use of aquafaba, the liquid left behind after cooking chickpeas, in a vegan mayonnaise that it debuted at Natural Products Expo West 2016.

"The truth is, food is changing in this country and it’s changing for the better. As a company, Unilever is looking for Sir Kensington’s to help them define the future of good food," cofounders Mark Ramadan and Scott Norton wrote in a blog post. "From here, we will work together with Unilever’s world class team to better serve our customers and reach a wider audience with our work — all with the shared principles that have made this partnership possible."

In addition to Hellmanns, Unilever owns Lipton, Ben & Jerry's and Klondike, among other brands. Its acquisition of Sir Kensington's demonstrates an evolution on its thinking in the condiments category—remember in 2014, when it sued Hampton Creek for the startup's use of the word "mayo" in the name of its eggless spread? Unilever later dropped the suit and then launched its own egg-free spread, and now is building on that with the addition of Sir Kensington's Fabanaise vegan mayo.

Unilever also owns an extensive portfolio of personal and home care products, including Dove, Suave and Vaseline. And, like many of its large CPG company counterparts, it seems to be turning an eye on smaller, better-for-you product makers to help refresh its portfolio. Last year, it acquired household product company Seventh Generation, and in late 2014 it bought gelato maker Talenti. But Unilever is also undergoing a bit of a transformation. Earlier this year, it rejected a $143 billion takeover attempt by Kraft Heinz Company and is now under pressure to prove to investors that it can succeed on its own. Shortly thereafter, it announced that it would restructure and explore the sale of its spreads business (which does not include Hellmann's), indicating that it was sharpening the focus of its food portfolio.

“Sir Kensington's is a beautiful brand," said Matthew McCarthy, vice president of foods for Unilever North America. "The acquisition aligns perfectly with our global sustainable nutrition strategy, moving us forward on our mission to delight consumers, produce delicious food with less impact on the environment and promote nutritious cooking."

Ramadan and Norton will continue their roles at Sir Kensington's, and Unilever says the deal is expected to close in the next few weeks.

How Justin's, Noosa and Annie's retain their core values after acquisition
Apr 04, 2017