HomeManufacturing and Supply (Business Resources)3 ways to promote healthy aging to your customers
Recent
Latest
Sponsored Content
The goodness wrapped in a certified organic seal – video
Podcast: What brands need to get on shelf at Fresh Thyme Market
May 24, 2022
Natural Habitats releases Palm Positive+, A Reference Guide
May 24, 2022
The Planting Hope Company aims to prove gender equity leads to success
May 23, 2022
Trending
Getting ready for 2023: Trends for brands to consider
May 17, 2022
Whole Foods' honors 30 companies with 10th annual Supplier Awards
May 18, 2022
6 tips to promote consumer understanding of Certified Organic
May 18, 2022
Natural beauty market trends
Jun 16, 2021
Natural Foods Merchandiser
brought to you by

3 ways to promote healthy aging to your customers 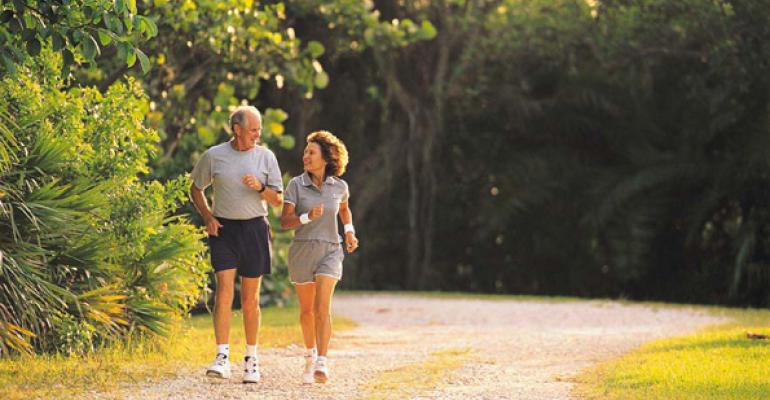 Get the latest knowledge about how a person&rsquo;s body ages at a cellular level, along with tips for marketing that information to natural products shoppers.

Just how lucrative can the baby boomer market be for natural foods retailers?

The latest estimate is that this generation, the wealthiest in the history of the world, has more than a trillion dollars of expendable income—and much of that goes to maintaining their quality of life, says Jay Jacobowitz, owner of Retail Insights in Brattleboro, Vt.

But the desire to live a long and vigorous life extends beyond the Woodstock generation. “Healthy aging used to be the purview of the 50-plus group, but we’re seeing increasing evidence that people in their 30s and 40s want to prolong the youthful stage of life,” says Jeff Hilton, cofounder of the Integrated Marketing Group in Salt Lake City. “Everyone has more knowledge and awareness that there are products that can promote healthy aging. That makes the outlook and forecast for this market pretty bullish.”

With this in mind, we look at some of the latest knowledge about how a person’s body ages at a cellular level, along with the best ways to market that information to natural products shoppers.

Most consumers have heard that antioxidants are good for them, Hilton says, but very few can tell you why. Here’s what you need to know to help shed light on the benefits of antioxidants for your shoppers.

The oxygen a person breathes helps tiny cell components known as mitochondria produce the energy that keeps the body alive, says Chris Meletis, ND, executive director of the Institute for Healthy Aging. But this process also creates free radicals. Despite their reputation, free radicals aren’t all bad—they fight infection and activate enzymes—but when they’re not busy with those jobs, they can go rogue, attacking and damaging cells throughout the body. This contributes to common aging indicators such as poor eyesight and sagging skin, as well as diabetes, cardiovascular problems, Alzheimer’s, cancer and other serious diseases.

Internal or environmental stress can also fuel excessive free radical production: Several studies have shown that white blood cells produce more free radicals when an animal is psychologically stressed. And when people breathe or are exposed to toxins such as ozone or pesticide residues, their livers work to neutralize the toxins—again, creating free radicals.

Antioxidants can help the body neutralize rogue free radicals. Many fruits, vegetables, herbs, beans and nuts are rich sources of antioxidants. Among the best are cloves, oregano, rosemary and cinnamon; acaí and cocoa; raspberries, blueberries and cranberries; pecans, walnuts and hazelnuts; artichokes; kidney and black beans; and raisins.

A growing number of processed foods and beverages have added antioxidants, which are usually measured and communicated through ORAC values on the product label. But despite the plethora of fortified functional products on the market, consumers are increasingly looking for more natural sources of antioxidants—or, as Hilton calls them, “inherently functional foods” that are simple, organic and preservative free.

Because of the growing confusion surrounding antioxidants, the best way to position free radical–fighting foods in a retail setting is to promote their anti-aging benefits—rather than their antioxidant counts, says Hilton. You can also educate shoppers on how food can support healthy aging by offering recipes that feature antioxidant-rich ingredients.

Food isn’t the only healthy aging tool in your store, however. Chemical-free cleaning products and natural skin care products also help eliminate toxin exposure—which is crucial for minimizing free radical damage. Help your customers understand this by using signage and in-aisle education to point out how product choices throughout the store can help customers age more healthfully.

After finding out that she was HIV-positive in 1985, Lisa Walford decided to adopt the calorie-restriction plan pioneered by her father, Roy Walford, MD. The change helped Walford live medication free for the next 15 years. Today, the energetic 56-year-old—who is coauthor of The Longevity Diet (Da Capo, 2010)—follows a basic medicine regimen, yet she says her healthy, disciplined diet not only continues to help stave off AIDS and its related health issues, but also makes her feel young and vibrant.

Of all the many strategies for living longer and avoiding disease, calorie restriction has perhaps the strongest scientific backing, including more than 1,000 animal and human studies conducted during the past 80 years. The hypothesis is that as calories are reduced—repeatedly exposing cells to mild stress—the body experiences what scientists call a hormesis effect, or a generally positive adaptive response. “The body believes it has an inadequate amount of food so it goes into more of a survival mode, where it strengthens its defenses at a metabolic level,” Walford explains.

Your shoppers can approach a calorie-restriction diet in several ways. Walford began by gradually trimming her daily calorie intake through focusing on foods such as fruits and vegetables that are naturally high in nutrients and low in calories. Some people on reduced-calorie diets graze on small meals throughout the day; others, like Walford, prefer to stave off hunger by eating a protein-packed meal in the middle of the day.

Recommending a calorie-restricted diet might not seem like the most welcome advice for your shoppers, but research shows that cellular benefits start to kick in with just a 10 percent reduction in calories. Help your customers make the smartest food choices by using signage and even nutritional guiding systems—such as the Aggregate Nutrient Density Index employed at Whole Foods Market—to steer them toward nutrient-dense foods.

Along with educating your staff on the benefits of calorie reduction, be sure to also inform them of the potential side effects of calorie-restricted diets—which can include bone thinning and a reduction in libido for 10 to 15 percent of people. In addition, losing too much weight through calorie restriction can lead to heart palpitations and other health concerns. (This is why such a diet isn’t recommended for children, people with eating disorders or pregnant women.) Supporting bone health is an essential part of any diet, so recommend that your customers eat calcium-rich foods such as dark leafy greens; supplement with calcium, magnesium and vitamin D; and do weight-bearing exercises such as walking and weight lifting, Walford says.

Help your shoppers get the antioxidants they need with these six recipes designed specifically to help outsmart aging.

It’s easy to tell when your skin is inflamed: It turns red. Detecting inflammation within the body is much more difficult, however, because doctors and researchers do not yet have a good way to measure inflammation at the cellular level, explains Jonny Bowden, PhD, CNS, author of The Most Effective Ways to Live Longer (Fair Winds, 2010). “That’s a critical problem,” he says, “because inflammation is associated with every degenerative disease we know.”

Like free radicals, inflammation can be a good thing in small doses. Step on a nail and you want white blood cells and the body’s inflammatory chemicals to rush in. But these injury-fighting compounds also go into 911 mode in response to gradual cell damage by free radicals. The result, says Bowden, is chronic inflammation—or inflammation that doesn’t know when to stop. How can your shoppers know if their bodies are housing chronic inflammation? According to Bowden, people who are overweight or have diabetes or dementia “definitely have chronic inflammation.” Others can find out by asking a health care provider to do a high-sensitivity C-reactive protein test, which measures inflammation in the body.

Balancing the ratio of omega-6 and omega-3 fatty acids also helps. To do this, Bowden recommends eating two servings of fish a week, taking 1,000 mg daily of fish oil with EPA and DHA, and choosing olive or flaxseed oil over refined oils such as canola, corn or generic “vegetable” oils. In addition, according to Bowden, “sugar turbocharges your inflammation-production pathways,” as do fried foods. With this in mind, suggest your customers simmer or use a slow cooker rather than frying or grilling foods at high temperatures (which creates pro-inflammatory advanced-glycation end products that can damage nerve and brain cells, as well as DNA).

Mainstream consumer media is increasingly covering the issue of inflammation and its role in aging. This means that products and education initiatives geared toward taming inflammation are poised to become a huge part of the healthy aging market. “[Halting inflammation] is the holy grail of the natural products industry,” Hilton says. But there is a hiccup: Limits on what a retailer can say about dietary supplements and other products can make it difficult to steer shoppers toward anti-inflammatory products.

As Hilton explains, the U.S. Food and Drug Administration views inflammation as a disease state, so companies can’t use words like “anti-inflammatory” or “decreases inflammation” on products—nor can retailers make those claims. Instead, products and retailers can make structure-function claims such as “supports healthy inflammatory response.” Hilton advises retailers to ask customers about the kind of inflammation they’re experiencing—for instance, joint inflammation—and then steer them toward products that support those structures or functions within the body.