Two years ago, executives at Galaxy realized that its fragmented brands were creating confusion, specifically around which of its products were casein-free or not, said Jaime Schapiro, director of marketing. Through eight focus groups and much two-way mirror gazing, plus a national Attitude and Usage Study involving 865 people, Galaxy solidified its strategy: rebrand to build a relationship with consumers around the promise of helping them enjoy cheesy foods.

What makes Galaxy unique is its product mix. New product launches have focused on dairy-free and vegan offerings, while previous products have been lactose-free, containing casein. The new brand clearly distinguishes all product lines: 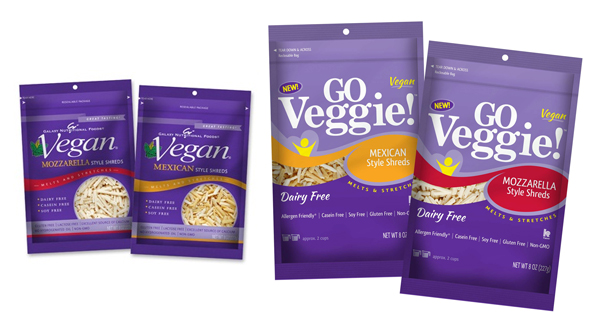 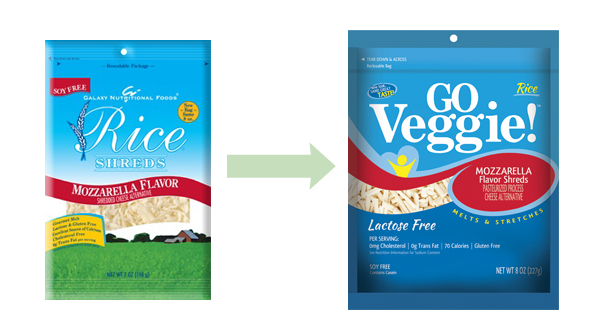 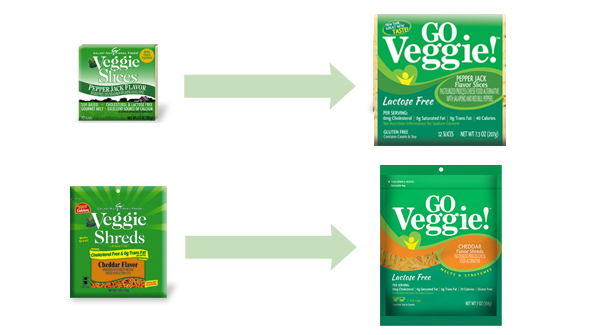 A dairy-free coming out

"At GO Veggie! everyone has a seat at the table," said Schapiro. "Vegans, flexitarians, [those with] food allergies or the guy who's just trying to lower his cholesterol by cutting back on dairy." Another inclusiveness bonus: The company is also pursuing Non-GMO Project Verification, as its purple dairy-free products are already non-GMO.

A who's-who of dairy-free gathered around a demo and tasting of Caprese Style Grilled Cheese, from The Cooking Channel's first vegan chef Jason Wrobel to VegNews magazine and GoDairyFree.org's Alisa Fleming—and yes, this newhope360 vegan editor.

1. It takes time to relaunch a natural brand; stay the course.

Appealing to a broad demographic with alternative cheese products is an undertaking. Schapiro breaks down the two-year rebranding process—from concept to launch.

2. Give special attention to transparent packaging.

GO Veggie!'s new packaging comes in three colors: green, purple and blue so that "consumers no longer have to question if a product is lactose free or dairy free, vegan," said Schapiro. The company chose to place "contains casein" on the front of package, even though it wasn't required by FDA. Likewise for "vegan" on the front of the dairy-free packaging, a term which doesn't necessarily mean a product is vegan.

Galaxy's research revealed that the former Veggie brand resonated with consumers, so they kept the brand equity and added an action-oriented component. "The new brand name captures the essence and spirit around the ability to say 'Yes, I can eat cheesy foods and the way you do that is by going veggie,'" said Schapiro. "We could have come up with a different name, but there's a lot of risk there."

See Are you the right entrepreneur to bring your brand to market?

4. Take the opportunity to reformulate.

"The cost of changing plates for new packaging is quite expense, and it's a good business decision to combine a reformulation at the same time as a rebranding," said Schapiro, but "if the product tastes great, there is no need to change it during a rebranding." To improve taste, Galaxy mainly reformulated the conventionally sold GO Veggie! Lactose Free Slices.

Rebranding is a substantial investment, so Galaxy capitalized these costs over time so that expenses don't hit all at once, noted Schapiro. One of the biggest expenses to get right? Proper research and development.

Once Galaxy settled on a unique brand name, the company was able to easily secure a trademark over the course of several months. "Since our company name didn't give us the brand equity, and because we couldn't get the trademark of just 'Veggie' or 'Vegan,' we wanted to ensure our new brand name had a solid trademark," said Schapiro. "The word 'Veggie' was too generic and it could never be a trademark for us."

For other companies, he recommends making sure the trademark covers a variety of product categories that you intend to expand into. "You don't want to secure a new trademark and find out later it's not valid in a new product extension," he said.

7. Switch your social media accounts and clearly communicate the changes.

To communicate the switch, Galaxy planned specific posts in the months prior to switching its account names to begin vetting reaction from fans about the new GO Veggie! brand. "Once we changed the site name, we didn't receive any complaints or see a decline in fans or followers," said Schapiro. "We've had a very positive reaction so far to the new Facebook name. In reality, we think our community didn't relate well to the name Galaxy Nutritional Foods, but related to our content and engagement.

8. Don't wait to launch new products while rebranding old ones.

During the two-year rebranding, Galaxy launched new products, such as its Dairy-Free Shreds and Dairy-Free Strawberry Cream Cheese. These new products drove momentum for the manufacturer with retailers in both the natural and conventional channels. Plus, getting on shelves with a new UPC is the first hurdle; changing packaging after the fact (unless you reformulate, which creates a new UPC) creates no extra work for the retailer.

9. Communicate your brand's new packaging at shelf with sticky coupons.

To help consumers make the connection from old to new, Galaxy will have brokers apply peelable stickers to its GO Veggie! blue and purple packages sold in the natural channel. Along with communicating the name change, consumers will also receive .55 off, said Schapiro.