Recent
Latest
The Planting Hope Company aims to prove gender equity leads to success
May 23, 2022
4 tips to get ahead of chemical concerns in packaging
May 20, 2022
7 CBD favorites in the increasingly popular gummies format
May 20, 2022
Mission MightyMe helps parents introduce allergens to babies
May 20, 2022
Trending
Whole Foods' honors 30 companies with 10th annual Supplier Awards
May 18, 2022
Getting ready for 2023: Trends for brands to consider
May 17, 2022
Sponsored Content
The rise of sustainable business – eGuide
Sponsored Content
Natural beauty market trends
Jun 16, 2021 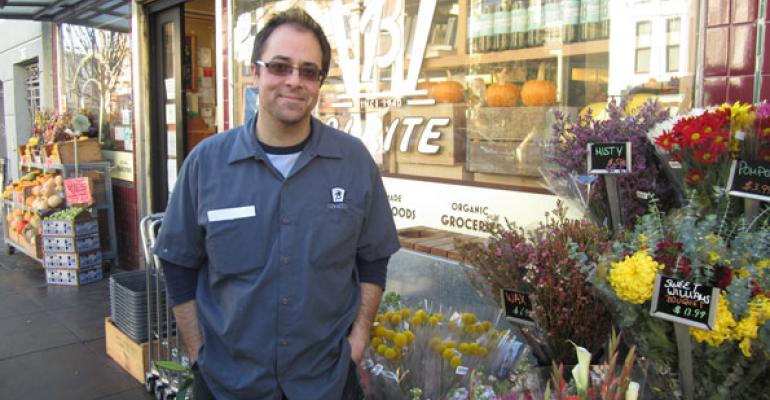 Natural retailer and author Sam Mogannam grew up helping his father’s market in the Mission district of San Francisco. By the time he finished high school, he wanted nothing to do with it. But then, he fell in love with food. After attending hotel and restaurant management school and running his own restaurant, he eventually made it back to the family business. But he decided he would change a few things—and do it his way.

newhope360: So how did you come back to the store?

Sam Mogannam: After a number of years of cooking in restaurants—I opened up my own restaurant and ran a little café for seven years in the financial district in San Francisco with my brother and sister—my dad called me and said, "Hey, you want to take over the store?" Initially, I was like no way, but he said, "Think about it."

Mission was just starting to change. New restaurants were opening up and it was in the process of changing from a crime ridden [neighborhood]. More people were moving in and trying to take control of their neighborhood and their community. So after some convincing, my dad made me realize that doing the store was a good thing.

So we gutted a space and I put a kitchen in because I had to cook. I still wanted to have that connection to food and I wanted to cook food that was seasonal and maintain some of the relationships that we had established with farmers and ranchers [from my café].

We brought a whole restaurant perspective to the grocery world, and it was a cooks' store first and foremost when we opened. We wanted it to be a place where people can get all the ingredients that they were reading about in recipes. We also wanted to provide people with the knowledge that we had gained as cooks: how to execute those recipes, how to succeed in making a great dish at home and how to pick out great ingredients.

Before long, we realized that in addition to feeding people, we were teaching people. Our role and our mission is to create community to food and we do it by feeding and teaching our community about the importance and the value of food.

newhope360: Not only has the store grown, but you’ve added new businesses, right?

SM: We started with six employees in 1998 and there are about 105 of us now working to run this little store. The business continues to grow double digits every year. It’s just an amazing community. Five years ago, we added an ice cream shop just up the street called Bi-Rite Creamery… About four years ago we started farming. We now have about two acres…The staff will spend the day working up there and come back and their backs will hurt. It’s like they are excited about the pain that they are feeling because they realize that farming is back-breaking work and we don’t value our farmers enough.

Also about four years ago we started a nonprofit community food space called 18 Reasons. We host producer dinners there, where the farmer/rancher can actually share their story and feed the guests food that he or she grew. We have cooking classes and lectures. We screen movies and have youth summer camps, youth workshops and writing workshops for kids. We are trying to give people an opportunity to get more deeply connected to each other and also to food—and really raise the value perception that food deserves to have.

newhope360: What are the big topics you are seeing around food?

SM: People want to know the story. They want to get as close to it as they possibly can. It’s something that we have been practicing since we started. I mean, before the whole local food concept was blown up, we were buying from farmers, from the farmers market, and buying from ranchers that we could actually have a conversation with because we wanted to know how they were raising their cattle. We have seen an increase in awareness. To me, it’s exciting. I think it’s about time people demanded more transparency and traceability with their food.

newhope360: What are some of the challenges of running such a community and local/organic focused store?

SM: It takes a lot of people to really get all the information that’s necessary in order to understand the full picture of every product that you have. And it takes a huge investment. We are 2,700 square feet and we have 100 people working for us because we have made this investment. And as a consequence our costs are higher and you know what? It sucks to be told that you are more expensive than Whole Foods or Trader Joe’s or whoever else it may be.

People are very cost conscious. And so to me, the challenge is maintaining the intimacy, but at the same time also making sure that people realize that it’s [price] fair. It’s not only fair to the business, but it’s also fair to the people that the business is supporting.

We really have to just take a step back and realize that our communities are only going to be sustained by what we put into them. And if it’s truly going to be sustainable, we have to put more into the community than we are drawing out and that means that we are going to have to sacrifice something, right? But just maintaining that status quo… that’s not sustainability.

We are trying to do our part, we are trying to teach it, but we are also trying not to be dogmatic, which is a challenge. But you know, I have seen what I've said five or seven years ago now alive in other parts of the country. I know it’s a process. I am—we are— in this for the long haul. We are in it for 20 years from now, 30 years from now, hoping to see a better place for our kids.

Can Bi-Rite Market put the soul back in grocery retailing?
Mar 05, 2012

9 ways to compete with retailers that offer deep discounts
Mar 01, 2012