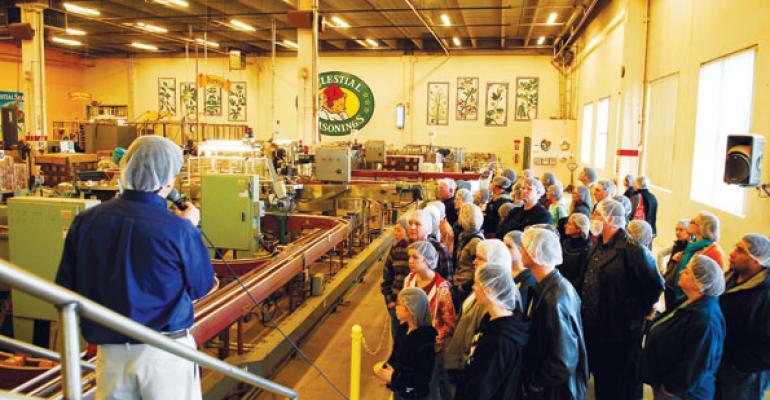 &nbsp; Three manufacturers that offer tours of their facility describe how it benefits them and how retailers can put this idea to work in natural stores. &nbsp;

The natural products industry is all about transparency. In your produce department, you can track an organic bean from seed to fork. But in your grocery and health and beauty sections, tracing a product from source to shelf is more difficult. That’s why an increasing number of manufacturers are opening their facilities to the public.

Factory tours not only show consumers how a packaged food, beverage, supplement or personal care item is made, but they also build brand loyalty. Just as a farm tour allows your shoppers to connect with the soil and the grower, a facility tour demystifies the manufacturing process. This in turn personalizes the brand, which could translate into increased shopper demand for it in your store.

Here’s a look at three manufacturers that offer facility tours and how it benefits the business.

Celestial Seasonings first opened the doors of its Boulder, Colo.-based tea plant to the public in 1991. Since then, the free tour, which often tops the to-do lists of locals hosting out-of-town guests, has grown from 8,000 to 140,000 yearly participants. The company offers five to seven 45-minute tours every day but major holidays, and takes visitors onto the manufacturing floor.

Steve Spencer, Celestial’s guest relations ambassador, believes the tour is so popular because it “immerses you in a rainbow of herbs. It’s a multisensory experience—not just seeing, but smelling and tasting.” From the olfactory nirvana of the mint room to the aural stimulus of the vacuum wrap machines, the tour’s carefully planned route is designed to arouse the senses while also preventing product contamination and visitor accidents. It begins with a video on the history of tea and the company, and then leads visitors to the herb milling areas, around the perimeter of packaging and out to the gift shop, package-label art gallery and sampling room.

“Going through the factory is part of the charm of the tour,” Spencer says. “It makes a stronger bond with the guests and shows we don’t have anything to hide. It develops deeper brand loyalty when people can see how clean the factory is, how polite the workers are.”

The free tour has another upside—even though Celestial pays the salaries of about 20 tour guides, it’s still a big moneymaker for the company. Spencer says the average visitor spends $27 in the gift shop on Celestial Seasonings teas, accessories and snack foods from other brands in the Hain Celestial Group.

Put this idea into action in your store

After 21 years overseeing Celestial Seasonings’ facility tours, Steve Spencer is an expert on what works and what doesn’t. He says the key for retailers who want to implement tours in their stores is to make sure they tell a tale that explains their mission.

“Show that you’re a local success story—people love a rags-to-riches story,” Spencer says. You can do this with a video detailing the history of your store, but “nothing substitutes for a person,” he says. “That shows you have great customer service and knowledgeable staff.”

Consider having store employees lead the tour or make appearances. Spencer says putting faces to names personalizes the store for shoppers, as do healthy lifestyle details such as “last year, Steve, the cashier, rode his bike 3,000 miles.”

Many shoppers who see the simple labels and low prices on NOW Foods’ supplements would never guess that the products are manufactured in a 263,000-square-foot, state-of-the-art facility. So about five years ago, the company decided to open its doors and share its stringent quality-control procedures with consumers.

“NOW was one of the first manufacturers to be [good manufacturing practices] certified, back in 2000,” says Todd Pauli, marketing communication manager for the Bloomingdale, Ill.-based company. “When consumers see the steps that go into making NOW products, they see that we take it very seriously.”

Tours occur on the second Wednesday of each month and include about 10 to 15 people each. Most of the attendees are from the Chicago metro area and have heard about the tour from fliers in local natural foods stores or through the NOW website.

The tour route begins in the ingredients delivery area. Visitors then check out the vast lab area, which Pauli says was designed with outside viewers in mind. It has a central walkway with large windows overlooking each lab and the ingredient testing equipment. Tour attendees also visit the section where the supplement ingredients are blended and made into tablets or capsules, as well as the bottling and labeling area and the packaging facilities.

“NOW’s facility tour plays an important role in its ongoing initiative to educate the public about the safety and efficacy of dietary supplements,” Pauli says. “As a result, most tour groups are led by NOW’s nutrition manager, and the various department managers speak to the group.”

When Brad Gruno started making raw chips in 2009, he quickly discovered that education was a key part of selling his product. That’s why in May, Brad’s Raw Foods opened The Chip Factory, a 2,500-square-foot meeting room and juice bar attached to the Brad’s factory in Pipersville, Pa.

The Chip Factory is designed as a gathering place for locals and an education center for raw foods and a healthy lifestyle. So far, the facility has hosted local bands, visiting lecturers, yoga and meditation classes, gardening seminars and even a class in which Gruno offers business tips, sharing how he built a company that is projected to reach $12 million in sales in only its third year. Eventually, Gruno also plans tours of his chip-making facility.

By providing a gathering place for locals, Gruno believes Brad’s is tapping into the popularity of the buy local/farmers’ market movement. “People love a community place—somewhere to be together,” he says. “That’s why Starbucks took off.”

The Chip Factory could eventually be a moneymaker for Brad’s Raw Foods. Currently, the juice bar is only open during events, but Gruno envisions it as a daily operation in the future. In addition, The Chip Factory’s programs help explain the concept of raw foods, which benefits the company’s bottom line. “I can see how we might even be doing more education than selling food in the future,” he says.

Contract manufacturing and GMPs: What does quality cost?
Apr 25, 2012