Recent
Latest
Innovation at Milkadamia is a weekly exercise
May 27, 2022
Sponsored Content
Are there potential carcinogens swimming in your biobased laundry detergent? – article
Rowdy Mermaid disrupts functional beverages with science-based innovation
May 26, 2022
Monitor: Environmental claims confuse consumers—even natural shoppers
May 26, 2022
Trending
Getting ready for 2023: Trends for brands to consider
May 17, 2022
Natural beauty market trends
Jun 16, 2021
Podcast: What brands need to get on shelf at Fresh Thyme Market
May 24, 2022
The Planting Hope Company aims to prove gender equity leads to success
May 23, 2022
Natural Foods Merchandiser
brought to you by 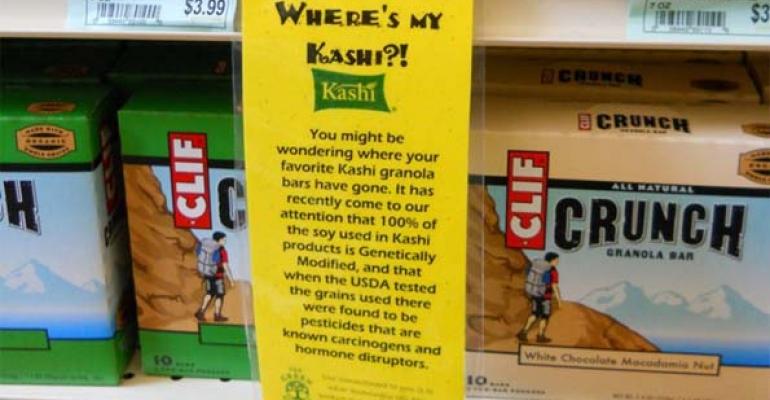 After its photo went viral this week, The Green Grocer proves that independent retailers are powerhouses for change in the food system. But are the GMO allegations against Kashi true&mdash;and more important, how can industry reassure consumers about the organic label?

The Green Grocer, an independent natural retailer located in Portsmouth, R.I., unexpectedly created a swirl of anti-GMO activity on the Internet this week—most of it targeted directly at Kellogg's-owned Kashi Company.

The Green Grocer owner John Wood was inspired by an Oct. 2011 "Cereal Crimes" report [PDF] from The Cornucopia Institute, which was sent to him by a Nature's Path sales representative. As a result, the grocery store removed Kashi, Barbara's Bakery, Peace Cereal and Bear Naked cereals and granolas from its shelves earlier this year and posted yellow signs on its shelves explaining the products' absence, such as the one shown above:

"You might be wondering where your favorite Kashi granola bars have gone. It has recently come to our attention that 100% of the soy used in Kashi is Genetically Modified and that when the USDA tested the grains used there were found to be pesticides that are known carcinogens and hormone disruptors."

GrandyOats Granola, a Maine-based organic granola company stocked by the The Green Grocer, shared photos showing its products still on the shelves. Since then, the photos have gone viral, with upwards of 11,000 shares across Facebook accounts, including nearly 300 comments on The Green Grocer's Facebook page.

The power of the small, independent retailer as a catalyst for healthy change is not to be underestimated.

Significant consumer backlash unfolded on Kashi's Facebook page, prompting the company to temporarily suspend calls on its consumer call-in line on April 25. Kashi responded that day with a video posted to Facebook. "The information circulating is scientifically inaccurate and misleading because it was not based on testing of actual Kashi products, but was instead general U.S. data," said Keegan Sheridan, Kashi's Natural Lifestyle Business Partner, in the video.

"While it's likely that some of our foods contain GMOs, the main reason for that is because in North America well over 80 percent of many crops, including soybeans, are grown using GMOs," she said. "Factors outside our control, such as pollen drift from nearby crops and current practices in agricultural storage, handling and shipping, have led to an environment where GMOs are not sufficiently controlled."

But The Cornucopia Institute has a different response.

Should retailers be responsible for policing GMOs?

While Kashi says that its product was not tested by The Cornucopia Institute, the organization that fights for organic, family-scale farming has a different story. The group sent samples of "natural" Kashi cereal (among other brands) to a third-party GMO testing laboratory and found 100 percent of the soy in Kashi to be genetically modified.

The "Cereal Crimes" report states that although Kashi is Non-GMO Project "enrolled" (not "verified") this gives consumers a false sense of security because the tested enrolled products were found to be made with GE ingredients. Kashi has enrolled in the Non-GMO Project and currently has seven of its cereals verified.

Kashi's no stranger to controversy. In August last year, Kashi was sued for its use of the "all natural" claim after consumers claimed that synthetic ingredients were found in several of its products. While FDA does not regulate the word "natural," USDA organic certification is regulated to exclude GMOs.

When large food entities that operate under natural and organic halos are suddenly found to not be so natural or organic, consumers begin to distrust the organic label. This distrust can trickle down into retailers who are "caught" carrying these products.

"As for why we carried these lines in the first place? Because several of these companies at one time were either organic or they had clear non-GMO sourcing when we first brought the lines to our shelves," said The Green Grocer.

The Green Grocer has been deluged largely with support, but there are some dissenters who question the retailer's motives in posting the photo. The retailer has responded to those statements, writing on its Facebook page: "We don't see this as an adversarial event. We see it as an opportunity to continue the discussion about our food supply, the use of GMOs and how we can more wisely use our food dollars to cast our vote for what we beleive [sic] in."

The GMO dilemma continues to face retailers across the country as grocers seek to opt out of GMO ingredients. Alfalfa's in Boulder, Colo., gives highest priority to USDA organic products, and then accepts products that make a no-GMO claim as long as they are certified by a third-party verifier, writes Mark Retzloff, co-founder and CEO, on Alfalfa's website.

Should consumers shoot the messenger or hold the whole system accountable for better GMO testing? Tell us your thoughts in the comments.