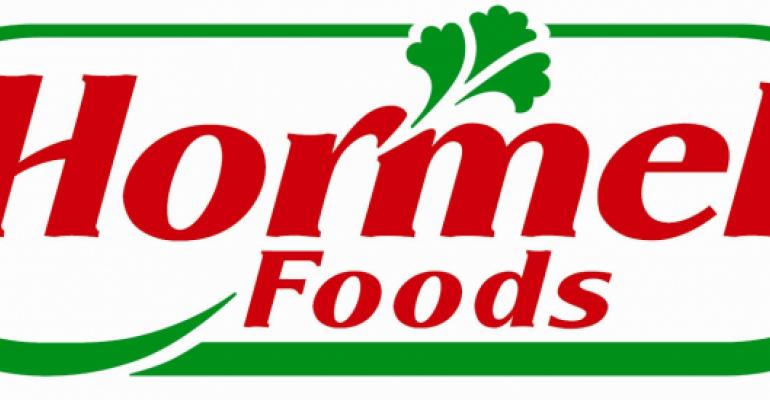 Fiscal year kicks off with with double-digit earnings growth and a record-breaking $2.4 billion in sales.

Hormel Foods Corp. (NYSE: HRL) reported record performance for the fiscal year 2015 first quarter. All comparisons are to the first quarter of fiscal 2014.

On a GAAP basis, the company reported fiscal 2015 first quarter net earnings of $171.7 million, up 12 percent from net earnings of $153.3 million a year earlier. Diluted earnings per share for the quarter were $0.64 this year compared to $0.57 per share last year.

Sales for the quarter were $2.4 billion, up 7 percent from the same period in fiscal 2014.

COMMENTARY
“We are off to an excellent start to our fiscal year with double-digit earnings growth and record sales in the first quarter,” said Jeffrey M. Ettinger, chairman of the board, president and chief executive officer.

Refrigerated Foods (48 percent of net sales, 38 percent of total segment operating profit)
Segment profit for Refrigerated Foods increased 19 percent driven by growth of value-added products and strategic margin management. Sales for the quarter were up 1 percent, with the increases led by retail sales of Hormel pepperoni and Hormel Gatherings party trays, and foodservice sales of Hormel Bacon fully cooked bacon and Hormel pizza toppings. The dissolution of the Precept Foods joint venture offset a portion of the sales increases.

“We expect our Refrigerated Foods, Jennie-O Turkey Store, and International value-added businesses to continue to drive results throughout the year, benefitting from strong demand and lower input costs. Jennie-O Turkey Store will likely experience less favorable commodity meat markets offsetting some of those gains as the year progresses,” commented Ettinger. “We look for Grocery Products and Specialty Foods to contribute to our growth goals in the back half of the year, with lower input costs, brand-building media campaigns, and innovative new products.”

“Our large portfolio of leading brands and sustained focus on innovation will allow us to build upon the momentum of our excellent start to the year,” concluded Ettinger.