How to bake breads with functional ingredients 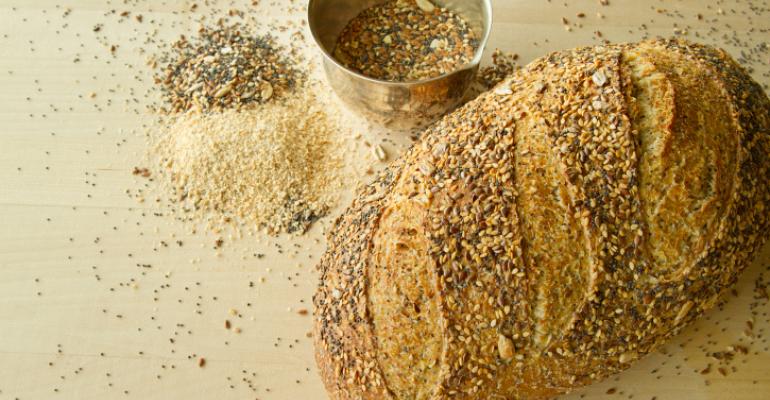 Whole grains and whole wheat are the current darlings of the bread aisle, but consumers are looking beyond the usual suspects as they search for products that pack even more of a nutritious punch. And formulators are finding waste-stream ingredients that can add unique functional characteristics and nutrition punch.

“In regards to alternative offerings, there has been a growing awareness, especially among new moms, regarding the importance of DHA omega-3,” he says. “It has been shown to be important to the normal development of the brain, and food products fortified with omega-3 are thus becoming more popular with consumers.”

Dean Mosca, president of Proprietary Nutritionals Inc., Kearny, N.J., notes that one of the richest sources of omega-3 fatty acids—chia seed—can be easily incorporated into baked goods. Besides omega-3s, “Chia seed is rich in a variety of nutraceutical ingredients:  protein, fiber, antioxidants, vitamins and calcium,” he says of the gluten-free, ancient grain. “The health benefits include cardiovascular, brain and immune system support, as well as support of a healthy inflammatory response.”

Waste not, want not

Sticking their scoop into what used to be the waste bin, formulators are finding a host of ingredients with attractive properties—and attractive costs. Three recent additions to this phenomenon stand out, and they come from the processors of fruits, nuts and grains.

Recycled cranberry encapsulates. Ocean Spray Inc., Middleborough, Mass., saw baking-specific functional opportunity in leftover cranberry skins, the byproduct of cranberry juice. The company years ago forged beyond being just a berry growing and squeezing cooperative; the Ocean Spray Ingredient Technology (ITG) group was formed to research, promote and manufacture functional ingredients from the parts of the berry that don’t end up as crimson juice.

“Manufacturers and bakers can face challenges when incorporating fruit into bakery applications. And taste, texture and appearance alone no longer drive purchases. Nutritional content has taken the forefront,” says Kristen Girard, principal scientist, Ocean Spray. “But some fruits, such as strawberries and raspberries, are traditionally difficult to bake with. In their raw state, they cannot withstand the rigors of processing, from extreme heat, freezing and thawing to kneading, mixing and handling.”

But the tough cranberry skin can withstand such rigors and protect its contents. Recognizing this potential, ITG developed BerryFusions Fruits. The ingredient uses cranberry skins to encapsulate difficult-to-bake fruits, such as peaches. The result is a soft fruit piece that maintains its structure, even in bagel dough. The ingredient has a two-year shelf life, without using artificial flavors, artificial colors or preservatives.

Almond bran.  Almond bran is another waste product that has found new life as a functional ingredient. Nuts in general are high in antioxidants and micronutrients, and almonds in particular have gained prominence for their healthful properties. The nuts are often blanched, removing the brown skin or hull (the germ), to make them more palatable. Until recently, some hulls were converted into animal feed and the rest were pure waste.

“It was sitting there looking for somebody to do something with it. The trick was to isolate the stream out of a manufacturing system to make it a food grade product, so we invested a fair amount of time to determine how best to dry the bran and maintain active materials,” says Robert Miltner, vice president of business development for Nut-trition, San Francisco. “If you look at what's good about almonds and know something about plant composition and how plants protect themselves, it becomes apparent. It's a passive protection in line with functional foods; that's how these bitter brown things come to be useful.”

The nut meat primarily consists of fat, protein and carbohydrates. All of the secondary metabolites, phytonutrients and compounds, which almond trees generate for protective reasons, are in the skin. Almond bran is a means of adding these phytonutrients to baked products without adding fat or carbohydrates.

The bran is a whole, dry piece of almond skin that can be ground to manufacturers' granular specifications, depending on how much evidence of the skins is desired in the finished product. With health-oriented, whole grain products, consumers may want to see evidence of ingredients, whereas a fine grain may be more suitable for less health-driven products. “A lot of this is sizzle as well as the steak,” Miltner says.

The bran flour dry mixes easily, and as an insoluble fiber, it isn't hydroscopic. Instead, it floats in the matrix instead of absorbing water. It contains a small amount of oil, but when kept cool, it boasts a shelf life of up to a year.

In breads, Nut-trition has successfully added the bran up to 10 percent of the weight of dry solids with the product still holding together. More common uses range from 3 to 5 percent. Almond bran has a light-brown color, and in baked products it lends a nutty, toasty flavor well-matched to bran muffins, cookies or breads.

“Almonds are so popular because they do things like reduce cardiovascular risk related to low-density lipoprotein (LDL), reduce blood pressure and have major antioxidant and anti-inflammatory properties,” Miltner says. “All of these benefits turn out to be related to the defense compounds present in the outside membrane of the kernel.”

Rice bran. Rice bran is another functional ingredient with potential in the baking industry, as it is rich in antioxidants and contains high levels of vitamin E, magnesium, B vitamins, polysaccharides and polyphenols. But once separated from the kernel, rice bran rots quickly. Given the amount of rice produced per year — 60 to 70 million metric tons — that's a lot of wasted nutrients.

But in 2008, Phoenix-based NutraCea found a way to stabilize the rice bran, making the former waste product available for consumption and large-scale baking.

NutraCea's RiBalance™ derivative, a processed, stabilized rice bran in which the nutrients are made bio-available through proprietary processing, has applications in breads, pastries, pastas and tortillas. Other than being a source of fiber and micronutrients, manufacturers claim it imparts a lightly toasted flavor. The product has a one-year shelf life.

But in their efforts to differentiate and deliver good-for-you bread, manufacturers must not forget that healthfulness, fiber and functionality still play second fiddle to one very important factor. “Whole grain and whole wheat attributes are definitely hot right now and consumers are very interested in more choices,” Anderson says. “But no matter what the hot trend is, it still all comes down to taste. Any successful new product must deliver on taste.”