How to make the perfect fermented food 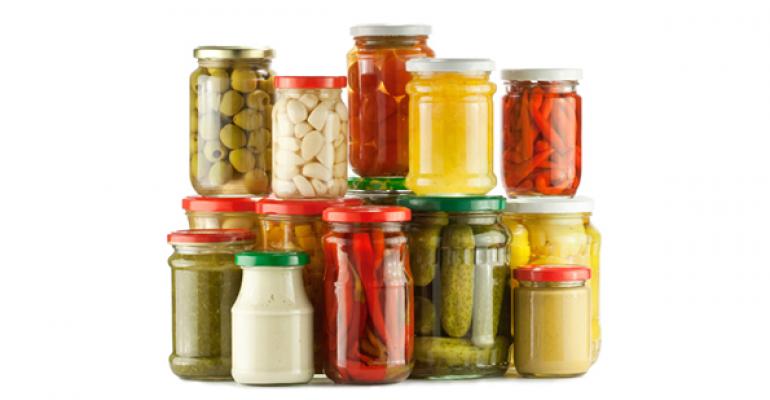 Who would&#39;ve guessed that meemaw&#39;s sauerkraut recipe would be next big thing? And yet&nbsp;these days&nbsp;consumers just can&#39;t get enough kvass, kraut or kimchi. How can you join in on the fermentation revolution? Take these tips to heart if pickled goods are on your radar.

Not long ago, the notion of fermenting foods was largely confined to farm folk, hippies and sauerkraut-making grandmothers. Now, sophisticated chefs like Jean-Georges and David Chang have embraced the trend, and fresh takes on traditional favorites—year-old kimchi, beet kvass, warm fungi with black-garlic yogurt—figure prominently on hip restaurant menus.

But for all the hype, fermentation—the breakdown of carbohydrates in fruits, vegetables and other foods by microorganisms and enzymes—is nothing new in the food world. Reports from the Food and Agriculture Organization of the United Nations (FAO) show that fermented drinks were being produced as long as 7,000 years ago in Babylon, now Iraq. Ancient Egyptians made a form of sourdough bread, fermented fruit drinks were common in Mexico more than 3,000 years ago, and other countries across the world have used fermentation for thousands of years to preserve food and enhance flavor.

The fermentation process used by our ancestors occurred naturally, as air—laden with lactic acid bacteria (LAB) and other microbes—came into contact with food, altering the pH and carbohydrate content and thus extending shelf life. But results varied widely, depending on temperature and other factors. As humans began to better understand the process of fermentation, we were better able to adapt pH levels, salt content and temperature, to ensure a more consistent end product.

Not your mama's sauerkraut

Fermented packaged goods are nothing new either: cheese, sausage, sauerkraut, pickles, yogurt, soy sauce and sourdough bread all owe some of their texture, shelf stability and mildly funky flavor to the activities of microorganisms. But the products emerging now are a far cry from the jars of flaccid sauerkraut we grew up with. They’re fresh, updated and focused on nutrition, combining old-world traditions with an artisanal flair.

Why the pickle popularity?

Why the sudden popularity of this ancient tradition? “Fermented foods are riding on the coattails of the farm-to-table movement,” says King. “As the food supply becomes more and more suspect, consumers are turning to all things traditional. Plant-based diets are becoming increasingly popular. And people are eager for natural products that support overall health and vitality.”

As simple and traditional as the process may be, though, creating a packaged fermented food is not without challenges. There’s a fine line between fermented and funky, and at its core, fermentation is really just controlled spoilage. Sandor Katz, fermentation expert and author of The Art of Fermentation, describes it as “the flavorful space between fresh and rotten.” That means a food fermenter must have at least some knowledge of how microbes work. Otherwise, says C.W. Hesseltine, Ph.D., author of The Future of Fermented Foods, “disaster is just around the corner.”

Use the following tips when making fermented products of your own:

In commercial food fermentation operations, the environment should be managed to encourage the growth of beneficial bacteria and prevent bacterial and mold contamination. “We’re careful about our temperatures and do a pH test of every batch we make,” says King. In most cases, temperatures should range from 65 to 75 degrees Fahrenheit, and the food should test below 4.6 pH (lower is even better).

In truth, though, “there’s not much guesswork,” says Scott Grzybek, founder of Zukay Live Foods. “Fermentation might be one of the safest ways we have to preserve foods. In packaged foods, you have to have a kill step. With fermentation, the fermenting is the kill step. With other methods, like pasteurization, if a food isn’t heated properly during processing, or something gets into it after it’s heated, that’s when you get botulism.”

If it’s done properly, no harmful bacteria can live in fermented foods. And the nice thing is, it’s easy to know if you’ve done it wrong because you get uncontrolled spoilage—also called rotting—and it smells horrible.

As mysterious and exotic as it sounds, fermentation is one of the most simple food production processes you’ll find. To make sauerkraut, for example, you’d just chop up a bunch of cabbage and other vegetables, salt them (use a good-quality salt, like Celtic sea salt), macerate them to release their juices, add water if necessary to cover everything, and stuff the whole thing tightly into some version of a jar or crock. The vegetables must be pressed down firmly to release air pockets, and should be fully submerged. Seal the container up, let it hang out for 3 to 5 days at room temperature, and check it at intervals to assess the transformation of flavor and texture.

The salt step is important. “Salt holds down most other microbes, but allows lactobacilli to thrive,” says Grzybek. “That’s the whole point of fermenting. You want the lactobacilli to be happy.”

This is where the artistry comes in. Experiment with seasonings, herbs and spices. Think whole peppercorns, star anise, cranberries, dried whole chilis, green tea, horseradish, cardamom pods, juniper berries—the list is endless. Combining sweet with savory adds another layer of complexity in flavor. For pickles (lacto-fermented pickles are different—and far more flavorful—than vinegar pickles, which are packed in vinegar to prevent spoilage), you’ll need a source of tannins to keep them crisp; these include grape leaves, bay leaves, cloves and tea. Besides preventing flaccid pickles, they look cool in the jar.

4. Be creative with equipment.

Because it’s such a new area, equipment is hard to find. “I can’t open up a catalog and call a company and order a bunch of fermentation equipment,” says Grzybek. “Even though it’s becoming more popular, it’s not like there are a lot of people doing this.”

Plan on retrofitting or repurposing equipment from other industries. “We couldn’t find large enough containers for our fermentation processes, so we ended up getting fermentation tanks from the wine industry, and macerators from the meat and sausage industry,” says King.

Though it’s trendy, fermentation is still a brand-new area, and may require more education than other common packaged goods. First, many folks have a dubious relationship at best with fermented foods, like sauerkraut. Second, there’s the stigma of spoilage. Err on the side of too much information, says King. Explain the processes in as much detail as you’re able, to reassure consumers that fermentation is safe. Recruit studies and science whenever possible. And remember that transparency is key, especially for this market. Consumers of traditional foods want to know what they’re buying—and where it came from.