Lead with values to turn engagement into action 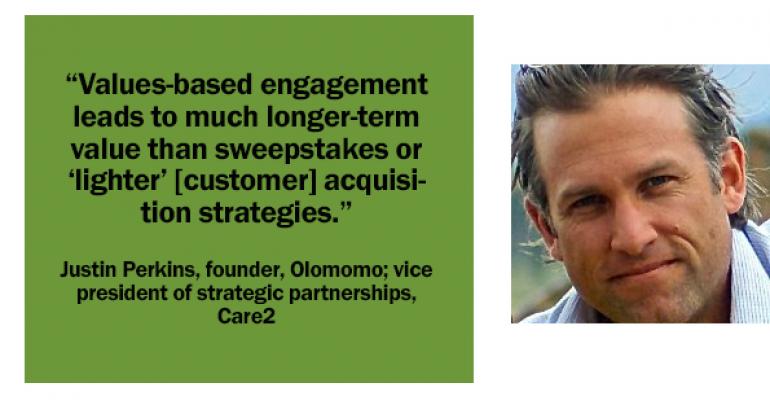 In addition to founding roasted nut company OLOMOMO, Justin Perkins has spent a good part of the last 10 years helping nonprofits and brands build engaged digital communities as vice president of strategic partnerships at Care2, a social action network with 32 million participants. Here, he shares some of his learnings from managing a large, active online community—and turning online engagement into offline action.

Can you give an example of a Care2 campaign in the area of food, healthy living or transparency that was really successful?

Justin Perkins: Care2 has worked on pretty much every progressive issue under the sun, with food sustainability and health living being core values of the community going back to 1998. More recently, Care2 has been a significant driver behind the non-GMO movement, not only through our own activity, but through supporting campaigns like Just Label It by recruiting over 100,000 activists. Directly in the natural products industry, we have helped brands like Rudi’s Organic Bakery, Earth Balance, Abe’s Market and other mission-aligned companies attract thousands of new people to their communities. Through leading with the values of the brand, we’re attracting consumers who share those values. For example, with Abe’s Market, we recruited over 100,000 people in about two months through a series of pledges where people promised to “live a healthier lifestyle,” or “shop non-GMO,” or buy natural pet brands. By self-identifying as people who share the values of the brand, a natural next step is then helping the consumers align their values with their shopping. That solves a problem for the consumer, in a similar way that Whole Foods solves a problem for consumers by picking products that are values-aligned. Care2 stakes its reputation on endorsing brands that we believe are trying to make the world a better place, and our 35 million members trust us to be the good guys.

Why were those campaigns in particular so successful?

JP: I think part of the key secret here is that we lead with values, not with discounts or “let me tell you all about my product.” On the Rudi’s Organic Bakery pledge, we simply put together a “pledge to eat organic food” and put that in front of our very eager audience. Rudi’s told me that the even though the Care2 members only constituted 20 percent of the overall newsletter, they ended up driving 30 percent of the engagement. Similarly, we know from working with nearly 2,000 nonprofit organizations over the past 18 years that this type of values-based engagement leads to much longer-term value than sweepstakes or “lighter” acquisition strategies. And that’s proving out in the numbers—both in terms of retention rates, engagement rates and ROI. In the ecommerce environment, Abe’s Market saw over 200 percent return on their ad spend in about 18 months. That’s very difficult to achieve, at a large scale, on the internet from any advertising source.

What’s one piece of advice you could give brands about turning online engagement into offline action?

JP: One of the critical mistakes I see all the time across the hundreds or campaigns I run every year is that brands talk too much about themselves in their communications. And then we also expect too much of people. VERY few people have the time or desire to do much more than click or like or share. So that’s a numbers game we need to play to increase the chances that someone will like our brand over the next one the next time that they brush past it in the shopping aisle.

But there are some tricks available now with data to enable you to identify behavior, and campaigns you can run to identify who are “the super activists” are on your list. However, because folks with the time to actually do something for you offline are typically one in a hundred, if not one in a thousand, you need a big following to really activate a critical mass of influencers who will do something significant to spread your brand. It’s really a funnel strategy, but it’s a critical process to understand for a brand to really take off. It’s a powerful feedback loop. That passion is priceless, and you want to treat those folks with a very high touch.

For example, at OLOMOMO, we are quick to respond when anyone posts on social media on our behalf and reach out with gifting of t-shirts or product. At Care2, we did a study at one point that showed people using our social networking groups were something like 60 times more likely to sign a petition. I used that insight to follow a hunch and do an experiment with a nonprofit climate change movement aiming to recruit local offline volunteer precinct captains. We took some publicly available social media append data and found that the Care2 members who had signed a petition or pledge, and were also highly networked and engaged on social media, converted at the highest rate to offline activists. I haven’t found any organization who is fully taking advantage of this potential to really maximize the online and offline integration of community engagement—maybe the exception being New Belgium Brewery.